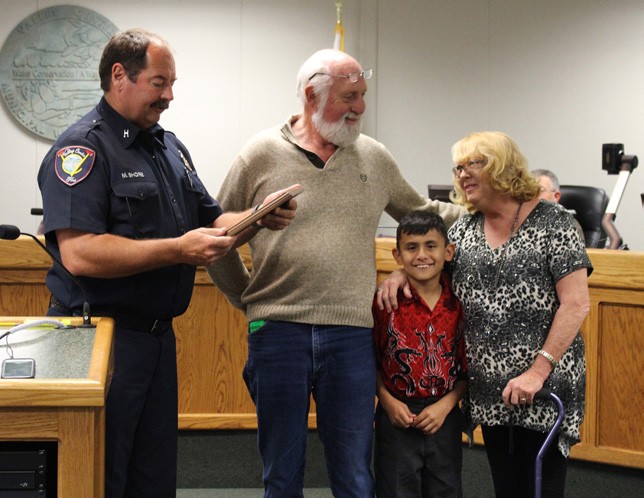 Suddenly a 67-year-old-man was on his back with cardiac arrest. All that stood between him and death was his disabled 61-year-old-wife crippled with arthritis and his 10-year-old adopted son, Danny.

It was February 10 at 9:43 a.m. in Valley Center and Daniel Tuck was moments, perhaps seconds away from succumbing. Whether he lived or died depending on what happened in the next few minutes.

Fortunately his son, Danny, had the presence of mind to call 911. His wife, although barely able to get onto her knees, had been trained in CPR and was able to administer that life-saving procedure, despite being in intense pain herself.

Dispatcher Jennifer Lyons of North County Dispatch provided the calming presence at the other end of the phone, providing Mrs. Tuck with the proper timed beat to compress her husband’s chest.

Once during the tense moments the patient stopped breathing, only to breath again.

At Thursday night’s Valley Center Fire Board meeting Chief Joe Napier played the tense and dramatic 911 call and the vital interplay between the dispatcher, the family of the stricken man and finally the firefighters led by Captain Mike Shore who showed up to transport Tuck to the hospital in time to save his life. He also recognized the Mercy Ambulance team headed by Doug Moriarty and Rick Roesch.

It all led to what Chief Napier called “a perfect rescue,” like a “perfect storm.” All of the right factors came into focus to produce a modern day miracle: a man who was able to go to church on his own two feet three days after being near death.

The Tuck family, the firefighters and dispatcher Lyons were recognized Thursday night. “This is a very special night,” said Chief Napier. “You’d think it would be a more common thing to have a miracle occur. But going into cardiac arrest and going to church three days later is not that common.

“It was a combination of divine 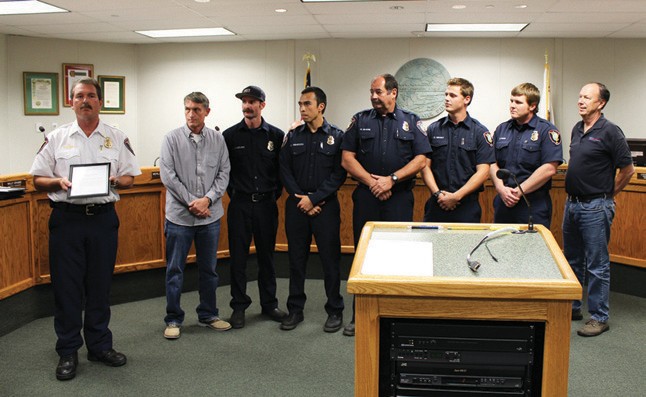 intervention and a crack team of emergency services, a dispatcher, hospital personnel, who all did their jobs perfectly,” said Napier.

The chief praised the fact that Mrs. Tuck knew CPR and he urged anyone who can possibly do so to take the CPR training.

“More often than not we end up using CPR on people we know and love rather than complete strangers,” he said.

He noted that it is possible to download an app that will tell you the nearest defibrillator unit and alert you if someone near you needs that life saving procedure. “I urge everyone to look up Pulseport on your phone and get CPR trained.”

The Tuck family will be front and center at the VCPFD’s demonstration booth during the Western Days festival.

Thursday night Mrs. Tuck handed out home baked cookies to the firefighters who saved her husband’s life and gave a big hug to the dispatcher who talked her through the ordeal.

Asked if it had been difficult to provide CPR when she has arthritis, Mrs. Tuck smiled and said, “I was sore when I was done. I think I’ve been sore ever since!”

Dispatcher Lyons said it was a pleasure to meet the people at the other end of the 911 call. “A lot of times we don’t know the outcome of our calls. It’s wonderful to know the outcome,” she said.

The chief noted that although VCFPD does not yet offer paramedic services on its medical calls, that may change soon in the near future. “We are looking very soon to provide paramedic services. We are jumping through the hoops we need to jump through to get there.”