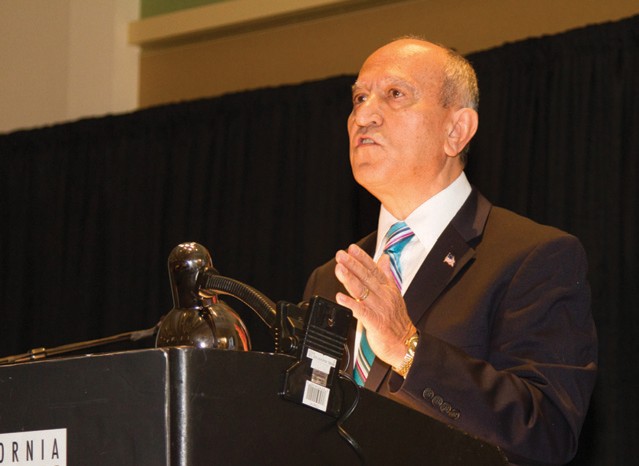 The celebration, which used to only attract about 50 attendees, packed one of the halls at the California Center for the Arts, Escondido for breakfast.

The celebration included the following awards:

Rorie Johnston of the Escondido Chamber of Commerce was given the Mayor’s Leadership Award. City Council awards were presented to Brian Murphy, in the arts, Escondido Disposal Inc., in business, Juan Arjona for community service, Dr. Debby Connolly in education, NKL Towing & Roadside Services Inc. for public safety and Elana Karoly was given the youth award.

Abed brought the crowd to its feet twice with his address, which mixed folksy good humor with economic analysis and his trademark bombs lobbed at both the state and federal government tax machines.

The 28-year immigrant thanked the city for its “vote of confidence this past election. “In the next four years, I will faithfully deliver on the promises I made during my campaign, as I did in my first term, and work together to create a “One Escondido” guided by the mandate delivered by you, the outstanding citizens of our great city. I will honor the trust you have given me and I will not let you down,” he said.

Besides local VIPs, the guest list included mayors from most of the neighboring cities in North County.

The mayor gave a shout out to City Manager Clay Phillips and our City Attorney Jeff Epp, board and commission members, and gave a special thanks to: “Fire Chief Mike Lowry and our Firefighters for protecting our city during last May’s fire. And to Police Chief 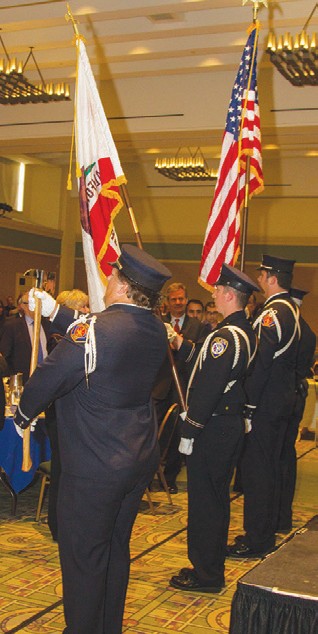 The color guard combined the fire and police departments.

Craig Carter and our police officers who work hard every day to keep our community safe. We suffered the loss of one of our finest police officers last year, ‘Officer Laura’ and I thank everyone who provided much needed financial and emotional support to her family.”

The mayor declared, “The last four years we have fulfilled our promises of Economic Development, Financial Stability, Public Safety and Neighborhood Improvement. It was the most rewarding experience to lead the city to a significant turnaround. We will continue to build a positive image, as well as pride and unity in our community. We are a good, transparent and efficient government that will only get better. We promised you a better city and we delivered a better city!”

Abed noted a net gain of 500 new businesses over the last four years and more than $500 million in new investment.

‘Westfield North County,” he said, “after spending $1 million dollars in renovation, has seen a 25 percent growth with sales increasing from $400 to $500/SF. With major new retailers added like Michael Kors, The Cheesecake Factory and White House Black Market. This growth puts Westfield North County among the top shopping malls in the country, and one of the best, fresh, upscale shopping destinations in the region.”

Tourism is an important part of the city’s economy, he said. “The city’s tourism organization, ‘Visit Escondido,’ is actively engaging visitors and residents and promoting our city.”

VisitEscondido.com receives 9,000 visits every month. It promotes over 800 annual events, and successfully produces North County’s only restaurant week, “Dine Out Escondido!” The San Diego Zoo Safari Park and Stone Brewing Company continue to attract two million visitors every year. “Stone Brewing Company’s phenomenal success has been nationally recognized. Since they moved to Escondido in 2005, their annual sales have increased from $5 million to $175 million today. As they 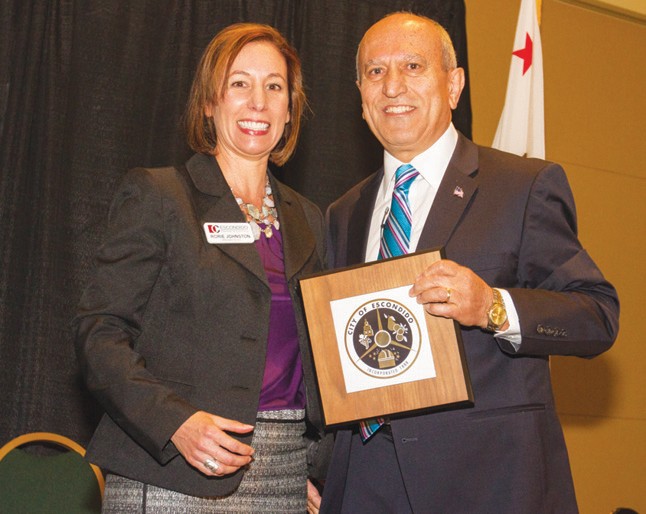 Rorie Johnston of the Escondido Chamber of Commerce was given the Mayor’s Leadership Award. Photos courtesy of David M. Zumaya, DMZ Visual

have expanded globally, we are very proud to have them based in Escondido,” he said.

“Our successful financial policy, five year financial plan and our current reserve balance at 21% of General Fund budget have improved our general obligation bond rating to AA- by Standard and Poor’s last year. This rating represents a very strong capacity for the City to meet its financial commitments and makes our City’s bonds more attractive to investors. Fiscal responsibility and efficient government are the core values behind our success in turning the city around,” he said.

In the area of Public Safety Abed noted that the city last year fully staffed its seven fire stations and also brought the number of police officers close to optimum levels, while reducing crime by 22%, to the lowest level since 1980.

“We continue to strengthen our Community Oriented Policing and have started the Neighborhood Transformation Program, working with our seventeen neighborhood groups to fulfill our public safety and neighborhood improvement goals.”

The mayor criticized State Assembly Bill AB109, which has released hundreds of criminals from state prisons and the recent passage of Prop. 47, which lowers the threshold to prosecute criminals and will release thousands more criminals to the San Diego County.

The City Council voted to increase street maintenance annual funding from $1.7 to 4.7 million has allowed the city to pave 60-lane miles and made significant improvements in roads and neighborhoods Citywide. “We have adopted the complete street concept in improving 9th Avenue and Mission Avenue by adding travel lanes, bike lanes and buffers

to reduce congestion and make our roads safer. We have nearly eradicated graffiti in our city. We promised a clean city, we are delivering a clean city!” he said.

The city is working with SANDAG to build the needed infrastructure for the San Diego region and North County, particularly the widening of the 78 and the I-15 intersection, he said.

The city has started construction of its recycled water system expansion. Beginning next year, it will be able to deliver more competitive water rates to our agricultural customers. The city also settled a water dispute with our neighboring Indian Tribes, the Vista Irrigation District and the federal Government, bringing an end to more than 40 years of litigation. The settlement, he said preserves the right to local water supply.

Praising the city’s many amenities, Abed singled out “historic downtown [which] is full of special events and activities. New businesses and restaurants continue to open in our downtown. Cruisin’ Grand continues to be extremely popular and creates a true sense of community bringing thousands of residents and visitors to downtown Escondido each week.”

He added, The California Center for the Arts has been ranked in the top 25 convention facilities in San Diego by the San Diego Business Journal and remains a prominent cultural institution in the region. Nearly 300,000 people will visit the center this year contributing to a more vibrant city.

The city plans several higher density housing units to fulfill the general plan goals approved by the voters in 2012.

Abed also singled out the city’s collaboration with public and private schools. “Palomar College, John Paul The Great University, the Charter schools continue to grow and provide more educational choices in Escondido. I believe that working together to build on the progress made by all our schools will raise the educational level, help us overcome economic and cultural challenges and make our 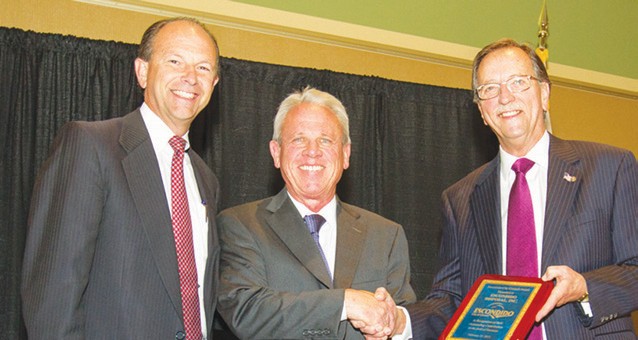 residents better prepared for the work place of today and the future.”

The mayor criticized the state and federal governments for making it hard for cities such as his to succeed, declaring, “The State and Federal debt continues to threaten the future prosperity of our nation. And is the biggest moral issue our country has ever faced. The state overreach on local government is unprecedented, and is a challenge to our progress.”

Under those priorities the city plans to:

• Work towards bringing a full service hotel to Escondido

• Maintain a balanced budget and use surpluses to improve core services

• Complete sweeping revisions to the approval process and building codes

Abed also promised to, “Move forward with our goal to build the library of the future in Escondido,” and “to integrate more technology and build an innovative frame work into the city’s operations to promote Escondido as a ‘Smart City.’ Wireless technology will be a part of your local government.

“I will remain focused on our strategic priorities, guided by our resolve, courage and determination to achieve the goal of prosperity for all who call Escondido home. For our city to be great, we must continue to build strong families and strong community. Let us make every family more prosperous and every business more successful.”

He concluded, “With optimism, values, liberty, courage, honesty, hard work and faith, we will build the city of our dreams and we will make Escondido the best city in America.”