Unknown Suspect Wanted for Assault of a Train Conductor 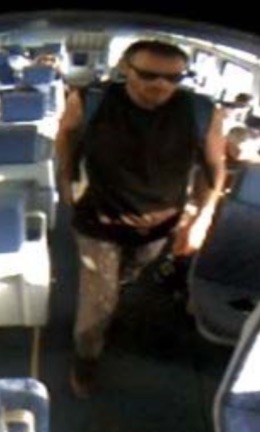 San Diego County Crime Stoppers and investigators from the North Coastal Sheriff’s
Station are asking for assistance from the public to help identify and locate an
unknown suspect wanted in connection with an assault of a train conductor.

On April 6, 2016, at 7:25 a.m., an unknown man was observed acting strangely
onboard the southbound Coaster from Oceanside to the Santa Fe Train Depot. At the
Old Town station, a passenger pressed the train’s emergency button to alert the
conductor of the man’s strange behavior. Fearing for the safety of the other
passengers the conductor asked the man to disembark the train. The man initially
appeared to cooperate with the conductor’s request, but as the conductor turned
away from him, the man punched the conductor once in the face causing his glasses
to fall off and his nose to bleed. The conductor fell into a pole and used it to steady
himself as he was dizzy from the punch. He suffered a mild concussion and numerous
lacerations. After the assault on the conductor the suspect ran off of the train.

The suspect is described as a 30‐35 year‐old White male, approximately 6’ tall and
weighing about 170 lbs. He had dark hair, a light beard and was wearing sunglasses, a
black tank top shirt, tan pants, and a blue backpack around his waist.

Anyone with information on this case should call the San Diego Sheriff’s Department
at (858) 565‐5200 or the Crime Stoppers anonymous tip line at (888) 580‐8477. Crime
Stoppers is offering up to a $1,000 reward to anyone with information that leads to
an arrest in this case. Anonymous email and text messages can be sent via
www.sdcrimestoppers.org.