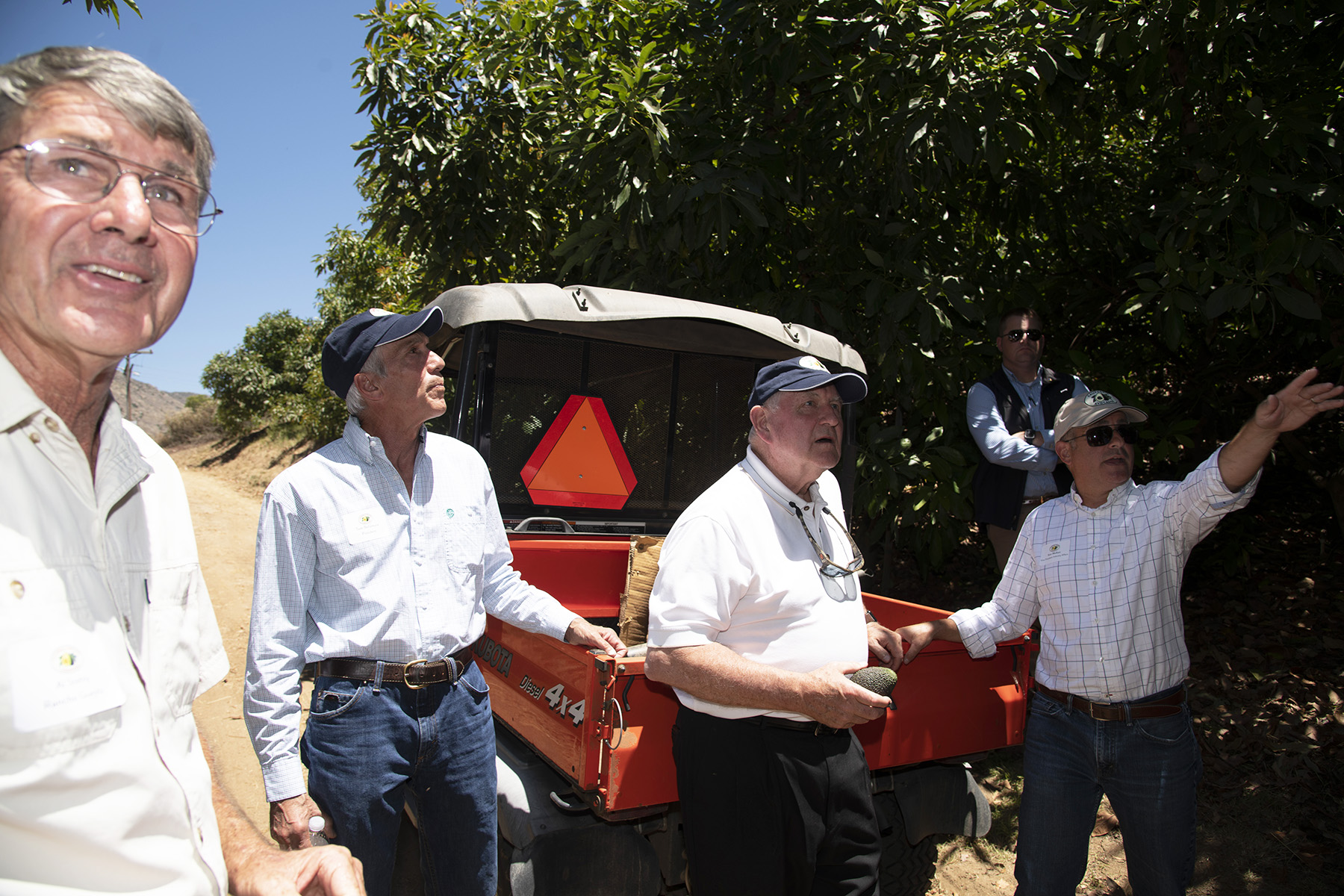 Last week the U.S. Secretary of Agriculture Sonny Perdue visited the area to tour local farms and meet with growers and to take part in a signing ceremony for the Trump administration’s Pledge to America’s Workers Initiative.

The Secretary was accompanied by California Avocado Commission (CAC) Chairman John Lamb, CAC President Tom Bellamore and other representatives of the Commission.

“On behalf of California avocado growers, I’d like to thank Secretary Perdue for the time and interest he expressed about our industry during his visit,” said John Lamb, CAC chairman. “We had a very productive meeting with the Secretary, who seemed very interested in helping with labor, water and other issues facing California growers.”

Local grove manager Al Stehly helped lead the tour, which included a visit to the Rancho Guejito, which is the last remaining Mexican land grant in California that is still intact. Stehly manages this farm, which includes a high density avocado grove that maximizes yield and minimizes water usage and waste.

Perdue toured a food product and kitchen equipment facility in Poway owned by Sysco, where he took part in a signing ceremony held for Pledge to America’s Workers, a federal agreement with businesses to create education and job training opportunities for workers.

Al Stehly described the meeting: “The Avocado Commission hosted the secretary. They called me and asked if we would host at Rancho Guejito. We met with him privately for about 20 minutes,” said Stehly. “We talked about trade, and how important trade is to the avocado industry and how destructive tariffs are.”

They also talked about non-tariff border problems, “As when fruit doesn’t get delivered on time to the country we are sending it to because of the bureaucracy,” said Stehly. “He obviously agreed with us and said the administration is working on it.”

The avocado industry leaders pointed out that almost all other countries that produce avocados sell them to China except for the U.S. “We said that needed to change,” said Stehly. They also discussed agriculture labor shortages and E-Verify, which is currently a voluntary federal program for ensuring that employees only workers who are in the country legally. “We told him we can’t have mandatory E-Verify without  comprehensive immigration reform first,” said Stehly.

He added, “We told him how for our industry, citrus and avocado, there is no mechanical solution [In other words, robots don’t work.] It’s all hand. We had him harvest a couple of avocadoes to see how difficult it is. I took him up a steep hill to demonstrate high density farming.”

The Secretary gained a hands-on appreciation of the skill it takes to harvest avocados, using a picking pole to cut an avocado from a tree.

High density avocado growing involves trees that are planted much closer together than in the past. Trees are cultivated low so that workers don’t have to climb ladders to reach the fruit. Such closely planted trees also have the added advantage that they maximize water use.

Stehly manages about 200 acres of high density planted avocados on the Guejito property. “We talked about water and how we are so water conscious and state of the art. I showed him water sensing devices that we just installed,” he said. These devices measure the swelling in a tree as small as the width of a human hair. “If the tree isn’t getting water you get an alert,” said Stehly. “You can walk the fine line between stress and not stress.”

“We expressed to Secretary Perdue the significant challenges growers are having with limited labor availability and let him know that the situation is getting worse with the aging of existing workers and enforcement concerns,” said Tom Bellamore, president of the Commission. “California avocado harvest crews are well-compensated, averaging $18 per hour or greater piece rate, but with agriculture labor availability approaching crisis levels the industry needs a flexible guest worker program that allows the existing workforce to remain and one that provides access to new workers.”

Rancho Guejito is the only remaining undivided Spanish land grant in California. Avocados have been grown on the property since 2010.

Perdue has been Secretary of Agriculture since April 2017. He was governor of Georgia from 2003-2011. 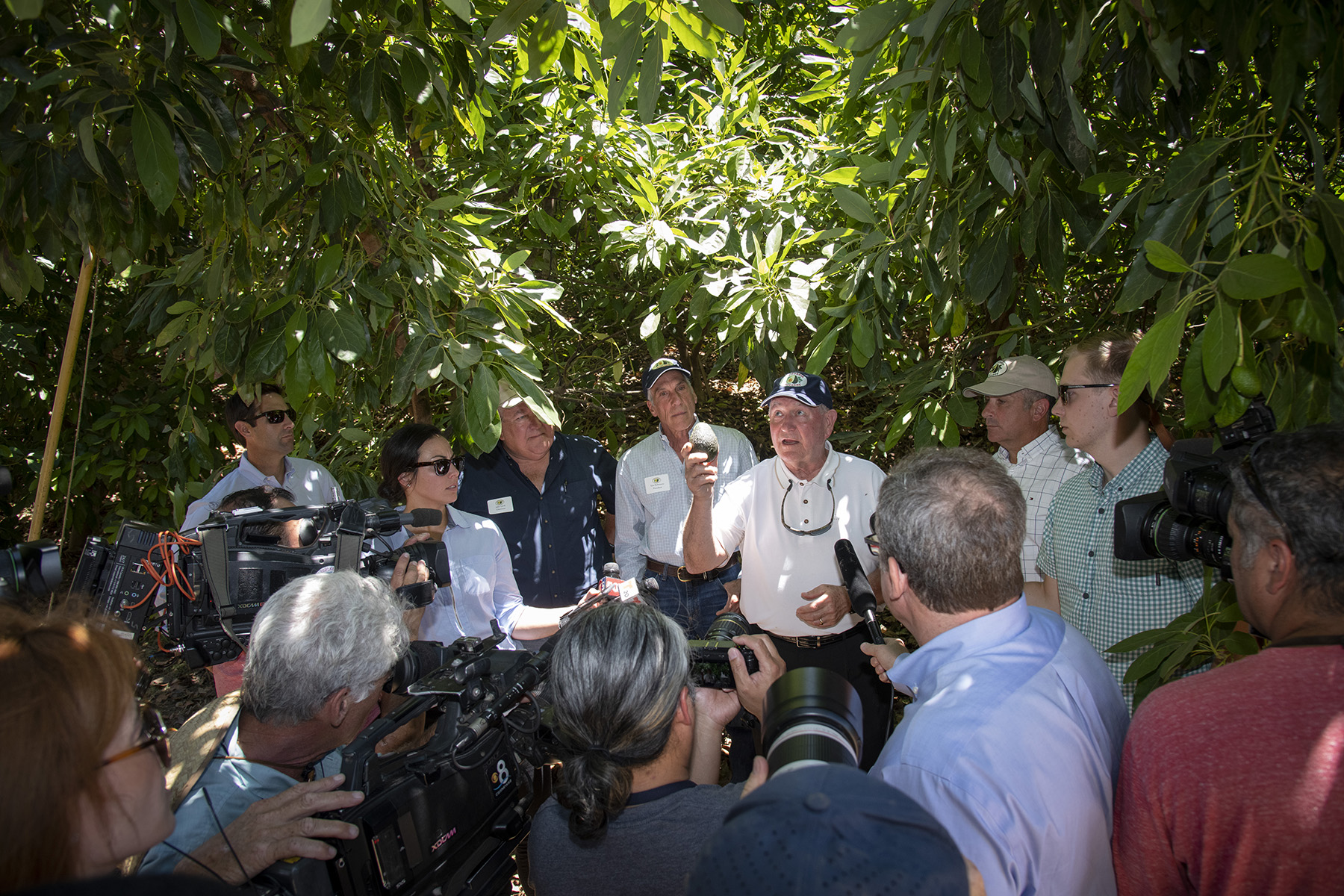