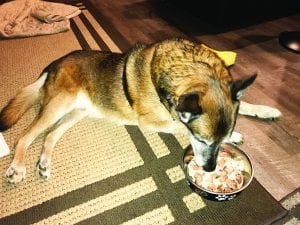 “Hunter” began his career with the Escondido Police Department Canine Unit in July 2006.

Throughout his tenure he was assigned to Officer Baeder. The two of them made an amazing team. One of many success stories is when K9 “Hunter” once alerted Officer Baeder to the odor of narcotics inside a travel trailer. A subsequent search revealed 160 kilos of cocaine! “Hunter” was adored by the other officers who worked with him. When Officer Baeder wasn’t paying attention, her co-workers loved to sneak “Hunter” treats through the patrol car window.

“Hunter” retired from d uty in April of 2013. He lived out his retirement days living with Officer Baeder at her home where he enjoyed being pampered. One of his favorite retirement hobbies was to tear apart any stuffed animal he could find. “Hunter” celebrated his 14th birthday with a steak and mashed potatoes dinner prepared by Officer Baeder. “Hunter” passed away on September 14, 2017.

K9 “Utah” began his career with the Escondido Police Department in June 2008. He spent his entire career working with Officer Banks and was the only EPD K9 to be named in a City of Escondido proclamation for his involvement in the capture of a suspect wanted for shooting at officers. “Utah” was known among the officers as a social butterfly due to his friendly nature and the way he would always nudge your hand wanting to be petted. “Utah” retired from duty in September 2013 and also resided with Officer Banks during his retirement years. He passed away on September 15, 2017. 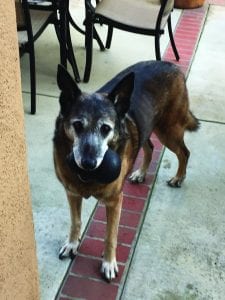 Together, “Hunter” and “Utah” assisted with the arrest of over 500 suspects. They also assisted EPD officers by searching over 600 buildings and open areas. They will be dearly missed by all who knew them. Officers Baeder and Banks remain with the EPD Canine Unit with new service dogs.