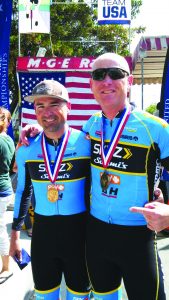 On May 6, two Escondido police officers and one officer from San Diego will join a group of cyclists on a seven-day 1,700-mile journey to honor and remember the victims of the ambushes in Dallas, Texas and Baton Rouge, Louisiana.

The 12 officers on the ride are from San Diego, the greater Los Angeles area, as well as Dallas and Fort Worth, Texas and each raised $1,000 to donate to the memorial. The officers are participating in this event on their own time. Monster Energy and Axon (formerly Taser International) provided additional financial support to help defray the cost of support vehicles.

The group will conduct wreath-laying ceremonies at the officer memorials in Dallas and Baton Rouge along the way. Police officers from both cities are planning on joining the group on bicycles as an escort out of their cities.

Miller, Jackson and Gonzalez are all avid competitive cyclists and have raced in the United States Police and Fire Championships and the World Police and Fire Championships cycling events in San Diego, New York and Virginia, earning several national titles over the last several years. Additionally, Miller and Jackson are members of Swami’s Cycling in San Diego, one of the largest and most established cycling clubs in the country.

Distance totals for the seven days range from about 175 miles to more than 330 miles, and the officers will each ride legs ranging from about 30 miles up to 100 miles in groups of three or four.

“Our goal is to honor fallen officers across America as we cover every mile between Dallas, through Baton Rouge and on to Washington D.C.,” Miller said. “Some of the days will be very physically challenging, even for the most seasoned and fit cyclists among us, but it pales in comparison to the sacrifice made by the officers who lost their lives last year, and those who suffered life-altering injuries.”

“This ride not only pays tribute to the officers who lost their lives, but it also aims to raise awareness of the dangers that police officers across the country face on a daily basis,” Miller said.

“We hope that this journey, in some small way, illustrates the unity, dedication and professionalism of officers nationwide. It is a huge honor to be a part of this select group.”