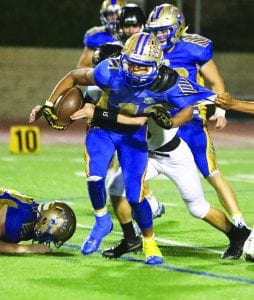 While returning this kickoff, SP’s Shawn Carter had the ball knocked loose from behind by Jag Brock Stehly. Photos by Lenny Kerbs

It happened with such suddenness that it was rather shocking. What had been a taut and evenly contested game between visiting Valley Center High and local rival San Pasqual, swung dramatically in the Jaguars’ favor in what seemed like the blink of an eye.

Energized by a lengthy touchdown pass, a fumble recovery on the ensuing kickoff and then a field goal shortly thereafter, the Jags were able to establish a quick 10-point margin early in the third quarter en route to a significant 37-21 victory over the Golden Eagles.

This win carried with it major ramifications for admittedly the Valley League’s top two programs. With its latest triumph, Coach Rob Gilser’s squad ran its overall record to a sparkling 6-1 but perhaps just as importantly, remained undefeated in circuit play (2-0) and now becomes the prohibitive favorite to capture its third successive league crown.

As for SP, its seasonal ledger fell to 4-3 while suffering its first loss in league competition (2-1). And barring something totally unexpected, the Golden Eagles hopes of  possibly capturing a VL title have been all but extinguished. At the moment, it looks like Tony Corley’s crew will have to focus on finishing strong while being satisfied with what figures to be a second-place finish in the VL.

Besides the damage that was inflicted on SP by the three touchdown runs from powerful running back Mateo Sinohui and a pair of long-distance scoring tosses from the potent combination of quarterback Rikki Mazzetti to H-back Keith Vasquez, the G.Eagles were seriously undermined by four second-half turnovers, all fumbles. “There’s no question that those mistakes took a little bit of the air out of us,” assessed  Corley. “That’s a real good football team over there and you can’t expect to beat a team of that caliber by making that many mistakes.”

However, for the first 24 minutes of play, this contest had the look of a potential barnburner. The G. Eagles showed that they meant business right from the outset when they needed just five plays to traverse 75 yards on the game’s opening possession. The highlight of the excursion was a nifty 33-yard dash by Shawn Carter in which he quickly got outside and then smoothly cut across the grain before being brought down well downfield. From there senior QB Westin Erdman did the rest when he sold the defense on a nice fake inside before slanting into the end zone with a 10-yard keeper. Erdman’s subsequent PAT was true and with just 2:28 having elapsed, the hosts were off  to a most positive start at 7-0.

And at this juncture, the SP defense was also flexing  its muscles, stoning the Jags on two straight three-and-outs. “Early on, our guys were really playing well on the defensive end,” said Corley. But as virtually every one of its previous six opponents had discovered, the VC offense is nothing if not persistent and productive—and sure enough—the Jags struck paydirt on their third series. A 17-yard out to

Zack Mahrenholz, which featured the splendid wideout shaking loose from an attempted tackle, got things rolling. Three plays later it was Mahrenholz again, embracing a dart from Mazzetti that netted 15 more yards. That set the stage for Sinohui who took a hard hit near the goal line but his forward thrust enabled to him to lunge in from a yard out early in the second stanza. But the Jags were still left in arrears when SP’s Tim Hansen got a great jump off the snap and knifed in to block the PAT try.

But now the VC offense was finding a rhythm and it continued to deliver on its very next possession. Starting from their own 38-yard line, the Jags began their march goal ward with an effective Mazzetti scramble and yet another Mahrenholz grab, this one going for 21 yards down the left sideline. Mahrenholz was building towards a huge night that would see him finish with eight catches that went for a total of 121 yards.

Mazzetti then kept things alive when he escaped pressure and converted on a clutch third-down run. Sinohui was the next to step up as he showed a quick burst through the line that contributed 14 more yards to the drive. From there, the talented back got the call once more and finding a gap off the right side, he lowered his head and barreled into the end zone on a 4-yard tote.

Moments later and going for a two-point conversion, Mazzetti lofted a perfect touch pass to the dangerous Keith Vasquez who had gotten behind the SP secondary in the right corner of the end zone. Not only did this connection extend the Jag lead to 14-7 but it also offered a portent of things to come in regards as to the huge influence that Vasquez would exert over the ultimate outcome of the game.

But now demonstrating their ability to respond, the G. Eagles answered right back. Three impressive carries by hardnosed running back Saud Carillo, the last of which was 19-yard quick- hitter up the middle, helped move the home team inside the 10. Staying with what had worked before, Erdman reprised his earlier scoring keeper when he faked a handoff, got outside the Jags  containment and sped in from two yards out. A successful kick knotted the count at 14-14.

And just before halftime, it appeared as if SP was poised to reclaim the lead when its offense  maneuvered down to the Jags 23-yard line. But in what arguably might have been the biggest defensive series of the ballgame, the VC defenders rose up big-time. First, linebacker supreme Ben Wierenga corralled Erdman for a tackle for loss. Then, reliable end Ozzie Anderson tracked down the G. Eagles signal-caller with a superb open field tackle that resulted in a pivotal sack. Finally, it was left to emerging backer Eddie Imgrund 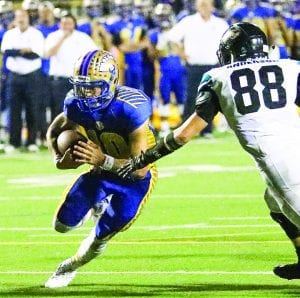 San Pasqual quarterback Westin Erdman gets around VC defensive end Ozzie Anderson on the first of his two rushing touchdowns.

to apply one more forceful hit on Erdman that killed the SP drive and insured a tie after 24 minutes.

However, it was right after the break that the Jags struck rapidly and set into motion a remarkable chain of events. On the third play after the resumption of action, Mazzetti dropped back and found a wide open Vasquez down the middle and just like that, the explosive VC receiver was gone like a shot, not stopping until he had hightailed some 63 yards for a thunderbolt tally. The fact that Vasquez was so by his lonesome suggested that there had been a busted assignment in the SP secondary. A mere 1:21 seconds is all it took for the Jags to jump ahead again (21-14) and it wouldn’t be long before more points were being added to their total.

On the following kick, return man Carter was in the midst of a determined run but while valiantly spinning for additional yardage, he was grabbed from behind by Brock Stehly, causing a fumble that was recovered by VC’s Ethan Wolfe.

Despite the fact that the Jags weren’t able to fully capitalize on this glorious opportunity deep in SP territory, they nonetheless came away with three more vital points when senior Alex Hakes emphatically toed through a 27-yard field goal. It was at this juncture that there was sense that perhaps the game was beginning to slip way from the hosts.

And sure enough, another SP fumble occurred shortly thereafter and this time the Jags would take full advantage. A twisting, spinning 17-yard rush by Sinohui got VC on the doorstep. Two plays later, he surged into the end zone untouched from in close.

Though looking up at a substantial 31-14 deficit, the G. Eagles showed some real mettle by offering what would be a gutsy response that came in the form of a 10-play, 73-yard advance. This lengthy drive was highlighted by a 35-yard aerial from Erdman to the versatile Brett Sayers who made a nice catch over the middle. Eventually, on a third-down from in tight at the 1-yard line, Carillo powered his way across the stripe. But this late third-quarter score that helped bring the count to within 10 was to be, in reality, SP’s last hurrah.

If there was still any doubt about the end result, the Jags removed it with their final touchdown of the night that came early in the final quarter. Going for it on a fourth-and-two from the SP 41, the resourceful Mazzetti faked, rolled to his left and then launched a spiral that Vasquez gathered in along the visitor’s sideline before once more showing his heels to pursing SP defenders, who really had no chance of catching him. If given just a modicum of room to operate in the open field, there’s a high likelihood that Vasquez will invariably take it to the house.

In addition to the glossy numbers that Mahrenholz put up, Mazzetti (238 passing yards, 2 TDs) Sinohui (101 rushing yards, 3 TDs) and Vasquez (106 receiving yards, 2 scores) also made a notable impression on the stat sheet.

In the aftermath of this critical triumph, VC coach Gilster had praise for his team’s ability to persevere, though in his mind, there’s still plenty of work to do. “We’re still making some mistakes that we need to clean up,” he began, “but this team just seems to be able to find ways to win.” When asked what he liked about his team’s latest effort,  he replied, “ I thought the defense shut the door when we had to and our zone blocking up front performed really well.”

And so the Jags appear to be moving inexorably towards another highly successful season that could result in as many as nine regular-season wins and most likely another league championship. VC will be a huge favorite this week when it travels just up the road apiece to take on winless Fallbrook.

Meanwhile, the G.Eagles will have a challenging task confronting them on Friday when they pay a visit to Oceanside High before concluding their regulation schedule with a pair of VL contests.

But as it relates to last Friday night’s tussle between VC and SP, it all came down to a narrow window in time, 6:29 to be exact, when the Jags struck immediately, took advantage of a pair of miscues and put 17 quick points on the board. That brief but all-too telling sequence of events simply proved to be more that the G. Eagles could overcome. Explaining away the SP defeat  doesn’t get any more complicated than that!