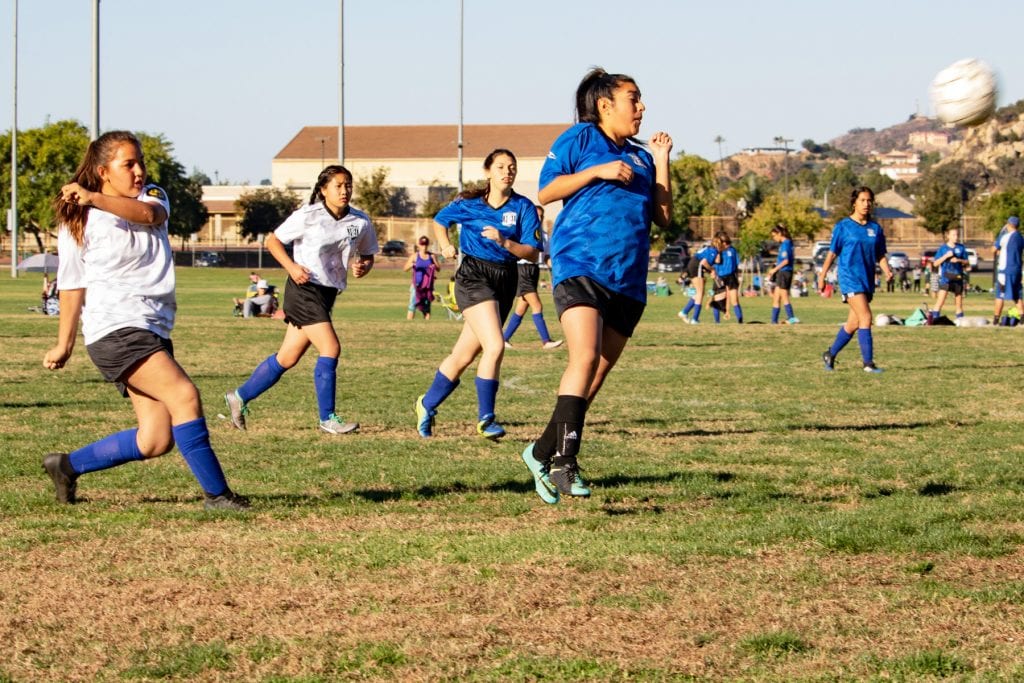 Ray Mota, in white uniform, sends the ball forward in a recent game.

The Tsunami rec Soccer girls under 16 team just finished its season undefeated, 12-0. All but two of those games were away contests. The remainder were in Del Mar, Oceanside, Encinitas and Scripps Ranch.  The is the second season the team has been undefeated in the Presidio Soccer League.

The team of 15 girls from Escondido, Valley Center and San Marcos is coached by Jon Berlinguette and his team of coaches that include Richard Jimenez, Chris Orozcos and Jimmy Phimmasone. Berlinguette is the offensive coach; Jimenez is the defensive coach; Orozcos is the conditioning coach and Phimmasone is assistant coach who works in whatever capacity he is needed.  Orozcos was just named varsity boys soccer coach at Del Lago Academy.

Coach Berlinguette is a retired Escondido Police Department officer  who has been coaching the team since 2008, although it has been named Tsunami only since 2011, when the players voted to adopt the name. And, considering the wave-like power of the team for the last several years, it’s appropriate enough.

Berlinguette said, “I’ve had kids who have been with me since 2011, They have stayed with us and although players come and go, for the most part our team has been together for several years now.”

As the girls have matured, they switched into the San Diego County League. “We were able to take our team over into that San Diego County league and we were very successful again this year,” said the coach.

He told The Times-Advocate: “I’ve been blessed. I’ve had a very, very talented group of girls that want to play, that know how to play and the best part of all is that they all get along. They are all friends off season. They do stuff together. They go to movies, have sleep overs and go out and work out together in the off-season.”

Berlinguette has a hard—let’s say impossible—time naming stars. “The whole team stands out,” he says. “I don’t have one star. I have what I consider 15 stars. Anyone is capable of moving the ball and anyone is capable of scoring. That is what makes them unique. They are so versatile as where they can play.”

Because of that interchangeability, the coach moves them around frequently. “That’s one of our tactics, to move the girls around a lot,” he said. “Because it frustrates the other team. They can’t key on one or two players. They don’t know who we are going to throw at them next.” 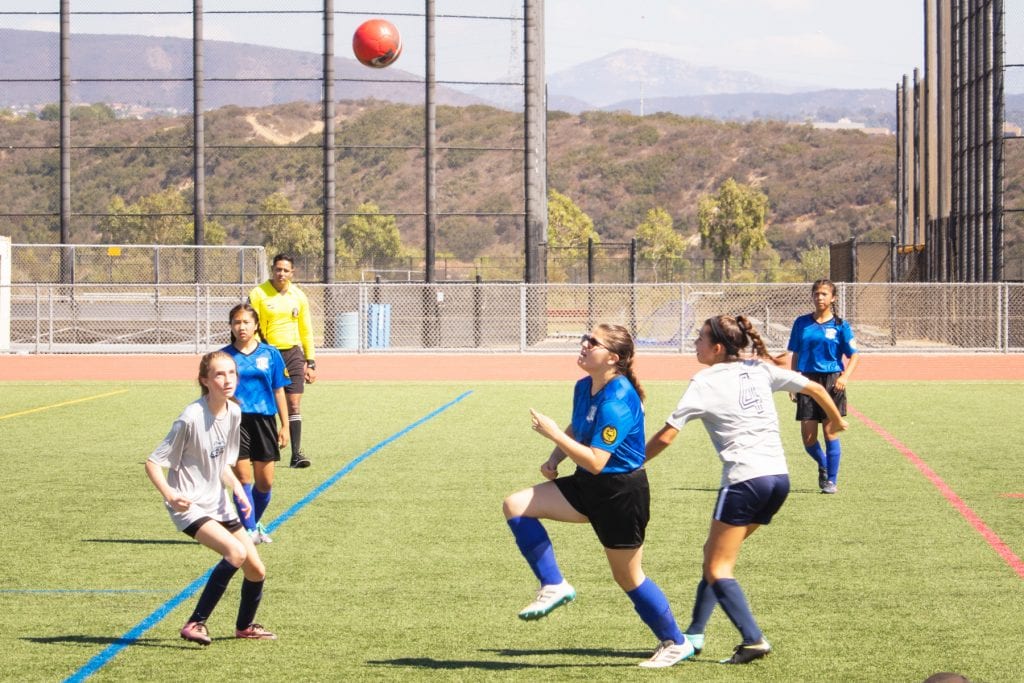 Klaryssa Solorzano (in blue) on the attack.

This has made the contests this year pretty one sided. “This season, we’ve scored 49 goals, and been scored against twice,” said  Berlinguette. “I think the strength of this team is that they are all friends. On and off the field. It’s not just show up to practice and play a game. They associate with each other even during times when they are not playing soccer. My daughter spends a lot of team emailing the other players.”

The team also has very supportive parents. “I probably have one of the best groups of parents,” said Berlinguette. One of those parents, Jerry Coolman, told The Times-Advocate, “Jon and his coaches, Rick, Chris and Jimmy are respected by the players and parents.  Family, health, education has always come before soccer.  Each year Coach Jon treats the team to an ice cream social after a practice. At year end he conducts a team Tsunami awards party to recognize each individual for her efforts.  I’ve been told all but one girl will be back next season due to his popularity.  In closing I thank him for all he did in 2018 to make this yet another glorious Tsunami season.”

Coach Berlinguette added, “They are never argumentative with the coaching staff. They don’t get involved with how we train the girls or where we play them. They trust us to do what we do. Our goal this year with this team was to get them ready for high school. Right now, they are all in tryouts at various high schools. Some have already made their teams.”

Although this season is over, all of the girls have said they want to come back next year.