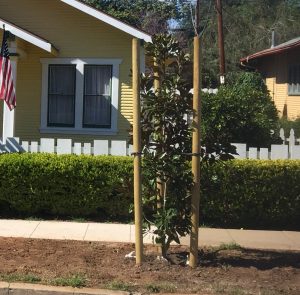 Planting to replace trees in the Old Escondido neighborhood that had to be taken out for safety reasons or because they were destroying the sidewalks have begun this week.

The planting of about 40 trees is part of the $3.3 million 2015/2016 Street Rehabilitation and Maintenance Project; and in fact, is the tail end of that project. At the same time traffic signs and street legends are being installed in this area.

Julie Procopio, city engineer, told The Times-Advocate that as part of the annual street rehabilitation the city resurfaces 67 lane miles. If that term confuses you—as it did us— the definition is if you take all of the roadways and convert them into one lane—that would be lane miles.

As part of that project they also replaced ¾ of a mile of lifted and broken sidewalks in the area that includes Juniper, Maple and 5th streets.

The removing of the trees was controversial when it began last year, and led to some members of the Old Escondido community complaining to the city council and to the mayor at one of his town meetings.

Procopio explained, “Some trees that lifted the sidewalks had hollow branches and limbs and needed to be removed. We are replacing the trees with new trees.” The property owners whose land abuts the sidewalks are being allowed to choose the species of tree that replaces the removed tree in return for promising to care for the tree and water it.

Procopio said property owners can choose from about six different tree varieties that offer different canopies. “We were pretty successful at allowing the property owners to come up with one.” Some properties are getting more than one tree. The neighborhood where trees are being replaced doesn’t encompass the entire Old Escondido neighborhood.

Other activities that are being covered by the rehabilitation and maintenance project are sidewalks and the addition of bike lanes.

“It’s quite a nice comprehensive project and the streets are looking nice out there now,” said Procopio.