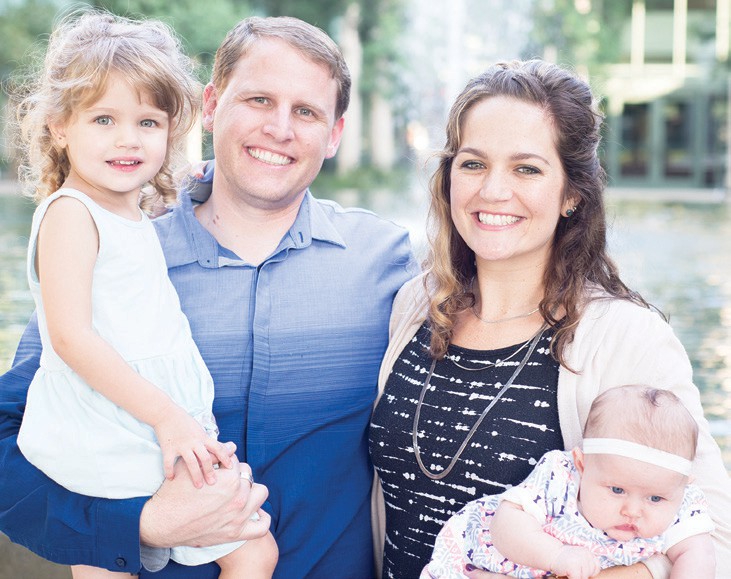 Shultz and his family: wife Natalie and daughters Tasha and Macie.

Douglas Shultz is one of five candidates for the office of city treasurer. This is the first time in about 30 years that the office has been contested since longtime Treasurer Ken Hugins is stepping down.

Of the five candidates, Hugins is endorsing Douglas Shultz to succeed him.

Douglas Shultz describes himself as a fiscal conservative for transparent government. He has a Bachelor’s degree in Economics and a Certificate in Financial Planning from Pepperdine University. He currently runs a Wealth Management practice and has worked in the financial industry for more than 10 years.

He was born and raised in Escondido. His family has lived here for decades and has deep ties to the Escondido community.

Shultz and his wife Natalie have two daughters, Tasha and Macie.

The candidate is actively involved as an assistant Scout Master with a local Boy Scout Troop and is also a member of the Escondido Sunrise Rotary Club. He has also served as a trustee on the Board of Directors for the Escondido Education Foundation.

Shultz says there are three main reasons why you should vote for him.

1) Experience. “First and foremost is experience,” he says. “I have worked as a volunteer assistant city treasurer for the past year. Because of that I have a thorough understanding of the city finances. One of the primary things I did was working with the director of finance analyzing the banking structure and the overall financials to see how I could save money. The banking structure was my primary project. I estimate that by we could save $60,000 a year along from redoing that.”

1) City Investments. “The treasurer is concerned with overseeing investments of over $100 million of the city’s funds. That is one of his primary responsibilities. “With my background I want to increase the return without increasing the risk. That’s my goal. I have a plan to do it. He adds, “The biggest thing is that I’m the only candidate with direct money experience. No one else is licensed to manage money on a day to day basis like I am. Before I started my own practice I helped manage a portfolio as large as $80 million. Large sums do not intimidate me.

1) Education. Shultz notes that he has been in the financial industry for ten years. “I have a Bachelors in Economics and a certificate in financial planning from Pepperdine University,” he says.

And with my background in finance I thought the office of treasurer was a great way to do it.”

If elected, Shultz says he plans to give back a minimum of 10% of his salary back to the city. “I plan on taking on a much more active role in the treasury department and I will need to assess the workload to determine how much extra I should give back above the ten percent line,” he said.

He concluded, “The city’s money belongs to the tax payers. I will ensure that the people of the city will be able to have a clear understanding of the city’s finances to the fullest extent of the law.”

To find out more about Shultz’s candidacy, visit www.shultzfortreasurer.com/