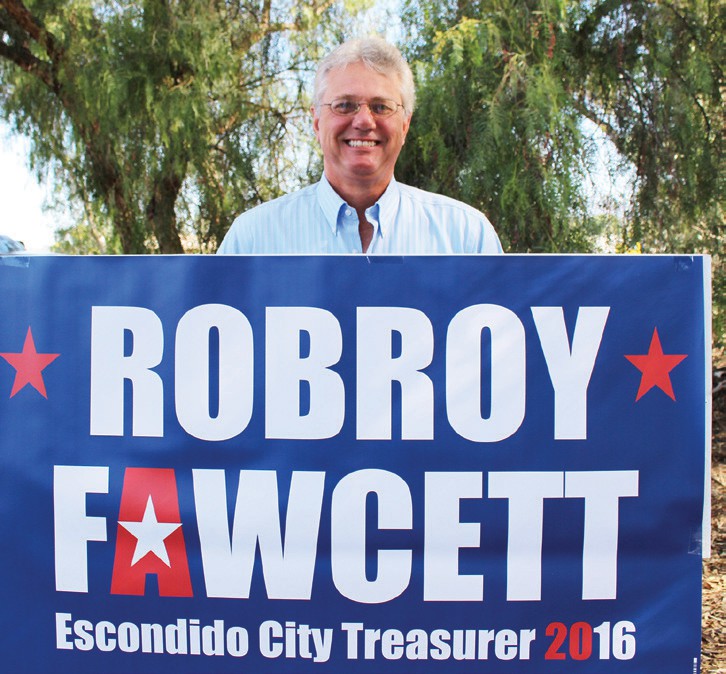 Robroy Fawcett is one of five candidates for the office of Escondido treasurer. His motto is “Elect Robroy ‘open’ Fawcett and the information will pour out of City Hall!” With a slogan like that, it’s obvious that transparency is one of Fawcett’s ideals.

Fawcett grew up in Highland, California, an orange growing community like Escondido once was. He graduated from Cal Poly Pomona, majoring in electronic engineering and physics. While in college he took off two years to be an LDS missionary in Argentina.

He later went to Brazil on a study abroad program and attended the University of Sao Paulo in Brazil, where, he says, “I had a blast.”

He worked in the aerospace industry in communication satellites until the late 1980s, when that industry slowed and he became a marketing engineer for a semiconductor manufacturer in the City of Industry. He did competitive analyses; product cost estimates, and worked with marketing managers to determine prices. “It gave me a look into the finance side and the engineering side of business,” he recalls.

Many urged him to obtain an MBA, but the urge to go to law school bit him when he was in Brazil and had audited an international law class. “I applied, got accepted and off we went to law school for three years to the Brigham Young University school of law,” he recalls. He had married Jane Moraes in 1986 and they had three kids at the time. His youngest, Michelle, had just been born. He graduated in 1992.

Since then Fawcett has worked as an intellectual property attorney and since 1999 had his own law office in Escondido. He specializes in patent law, dealing with, “one of the oldest bureaucracies in the country. He observes dryly, “If you want an emotional job, don’t go into patent law.”

The Fawcetts moved to Escondido in 1996 and “loved it.” Fawcett largely confined himself to involvement with his children and other youth activities such as Cub Scouts, until about ten years ago when he objected to the fact that Palomar Health had sold the public on a bond to build a new hospital for $500 million — when the actual cost exceeded $1 billion. That was Fawcett’s entrée into local politics.

“I came to realize that the hospital wasn’t as advertised and that the budget wasn’t big enough to build the hospital and I found that on a lot of things they weren’t being very open with the community,” he recalls. He became involved with the siting of the hospital, and then the siting of the Del Lago High School, and began attending city council meetings to press the Hospital District’s feet to the fire about its promises to keep the old hospital open downtown. “I was confident they wouldn’t keep the promises and they didn’t,” he says.

In 2008 he was helping with a local campaign when he noticed that the city treasurer was running unopposed. “I didn’t know we had an elected treasurer,” he recalls. “As I looked into what he does I found it very interesting, and thought he ought to be more available to the community.”

His daughter, who graduated with an accounting degree, challenged the incumbent in 2012 and lost by 24 votes out of 34,000 cast. She wasn’t able to run this year, and so her father took on that challenge.

“I was surprised when the current treasurer, Ken Hugins, decided not to seek reelection,” he says. He had originally run because he felt that the office wasn’t transparent enough. “I felt we needed a change. I think there are some things in our government that could be more open.

“I believe the city needs an independent City Treasurer elected by the voters,” says Fawcett. “I don’t believe the City Treasurer should be under the control of the City Manager, nor appointed by the City Council.” Note: The treasurer is an independent office, as Fawcett says, but he wants to keep it that way. “I will be a vigilant watchdog, readily accessible and eager to address your concerns,” he says.

He believes that the city should list all of its warrants at each meeting. “You go to school board meetings and they have purchase orders that they list,” he says. “The city council has line item for approving warrants and they don’t list them.”

He doesn’t propose printing them all on paper. “But with the internet and electronic publishing there is no reason not to list them. The treasurer’s job as I understand it, is to pay warrants. Whether he does that or it’s passed onto director of finance, I don’t know. The job you hear about the most, of course, is investing surplus funds.”

Fawcett has no desire “to be a financial savant and come up with any new financial schemes,” he says. “I will keep the money safe using decades old tried and true investment vehicles. My priority will be safety first, liquidity second and yield last. I lived in the 1980s and I watched city treasurers chase yields and sacrifice liquidity and then had to cash in safe bonds early, or even worse, got involved with unsafe investments (such as derivatives) that resulted in the bankruptcy of Orange County, one of the wealthiest counties in the U.S. That I WILL NOT do.”

“I can be an advocate for getting the public access to more information. We’ve had a tendency in municipal government to overcompensate top city management. I think management salaries at city hall are too high. That came up during my daughter’s campaign because they said Hugins gave back half his salary and he said he only worked part time. Where else can you get a part time job for over $100,000 a year?”

He supports smaller city manager and city attorney salaries. Note, the treasurer’s salary is tied to both of those officials’ salaries by a citizen’s initiative passed in 1984.

Since the treasurer is responsible for investing the city’s assets, Fawcett questions why the city has an investment manager, who makes $70,000 a year and part-time investment clerk who work for the director of administrative services and makes $35,000. “I don’t know when they created these positions,” he says.

“Obviously there is a lot of room for reform. I think we should have an elected city treasurer. Now the question is what does he do and how much does he get paid?” he says.

When you think of Fawcett, he says he hopes you will remember: “ I’ll keep the money safe. I’m for open government. I will advocate against excessive management salaries at City Hall.”