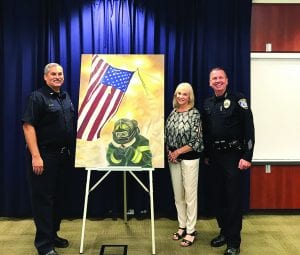 Senior citizens from across Escondido gathered at the police and fire headquarters on Monday afternoon to pay tribute to First Responders on the 16th anniversary of the terrorist attacks on the World Trade Center and the Pentagon.

Local real estate agent Wendy Moldow, along with Police Chief Craig Carter and Fire Chief Rick Vogt, were on hand to talk about the journey of a piece of 9/11 memorial art that has been on display at the facility for the past year.

The Traveling 9/11 Memorial Painting was created by Carlsbad artist Kelly Lucas and was originally auctioned off to a New York restaurateur to raise money for fallen firefighters families. Several years later, he returned the painting to Lucas with his donation intact. Lucas again auctioned the painting off, this time to raise money for Canine Companions and the Wounded Warriors Project. Moldow was the winning bidder, and she set out to display the painting at fire stations throughout San Diego County.

During the ceremony, Fire Chief Rick Vogt told the crowd of about 40 seniors that the lasting memory of the attacks was the indomitable spirit of this country and the teamwork and cooperation amongst all first responders.

“It is our job as law enforcement officers and firefighters to keep the memory of those who perished on 9/11 alive, and to be ever vigilant in the protection of our citizens,” added Police Chief Craig Carter.