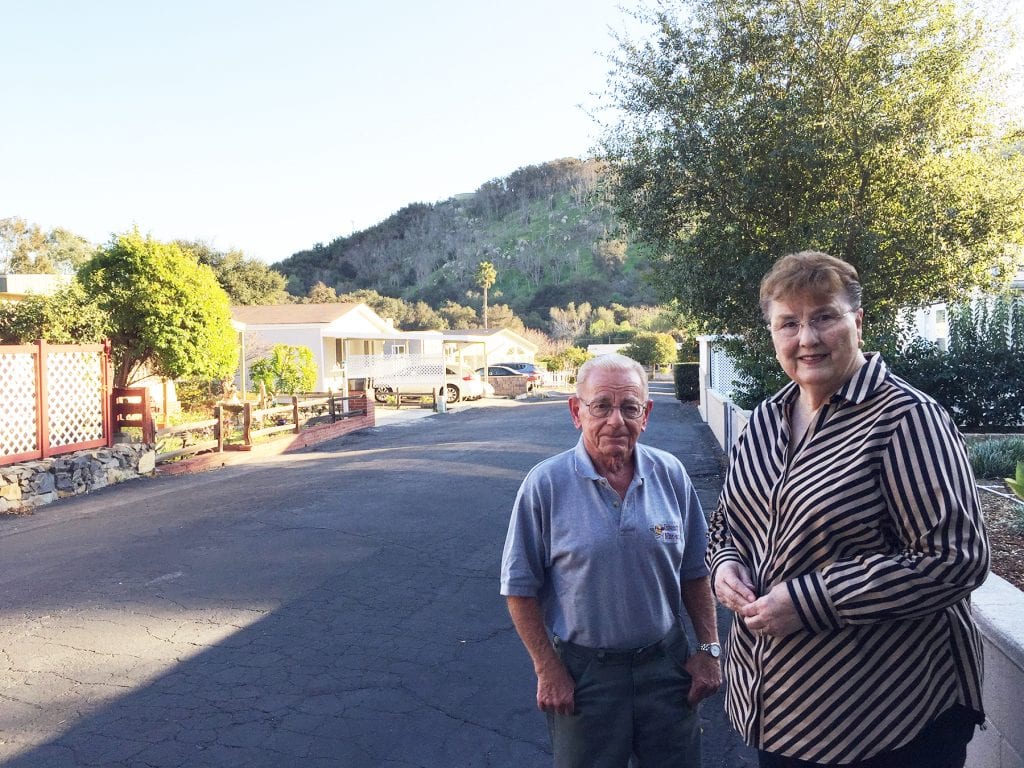 Dr. Tony Eason and Georgeann Higgins of the Deer Springs Oaks mobile home park, near the entrance to the park, which they fear could be destroyed if Newland Sierra goes forward.

Editor—Please see our related interview this issue with the proponents of Measure B. The two articles can be read as bookends to the issue of Measure B, which, if approved, would authorize the Newland Sierra development. Read them both and you decide.

Tony Eason and Georgeann Higgins of the Deer Springs Oaks mobile home park have more than just the usual NIMBY reasons to oppose the Newland Sierra development. Residents of this community of 32 units near the intersection of Deer Springs Road & I-15, they feel their homes are at risk if the development is approved—or could become collateral damage from years of blasting, noise and traffic that could drive property values down.

Deer Springs Oaks is a co-op park where each resident owns a 1/32nd  share. It is a senior park and most of its residents are on fixed incomes.

These leaders of the No on Measure B campaign talked to the newspaper earlier this week about their concerns.

Dr. Eason is a retired surgeon, a native of Minneapolis who moved to North County in 1965 and has lived in the park for many years. He was the first chief of staff of Pomerado Hospital when it opened.

Mrs. Higgins moved from Los Angeles County three years ago. There she and her husband owned a roofing business. They decided to sell and move to a more rural area, “out of the shoulder to shoulder atmosphere.” She serves on the park’s board of directors and is its business manager.

The park was established in 1960. Before that it was a popular tent camping spot in the 1940s.

“I think we are rather unique in that our story hasn’t been widely circulated,” said Dr. Eason.

“Our park is a singularly impacted community because of this project. All the construction, noise, blasting, pollution, water issues and fire issues will impact us big time.”

The other major thing that makes their story compelling, he said, “Is the way Newland and the County have handled this as far as our park goes. They have told us nothing about what will happen with Deer Springs Road and I-15. We’ve had them both and the County looking at our property. We requested a sound wall to protect us from the sound and the traffic.”

“A motorcycle could crash through that,” scoffed Dr. Eason. “We would also have to maintain it and pay for the insurance after they put it in, even though it would be on county property.”

“We talked to Rita a couple of times and we had both look at the entrance to our park and the intersection, which is already failing,” recalls Dr. Eason. “They said the changes wouldn’t impact us.” The EIR (environmental impact report) for the project  says the park won’t be impacted, he says.

“They managed to separate the modification of the interchange from the project itself,” said Dr. Eason. “We asked, ‘Shouldn’t this intersection be part of the EIR?’ She said no, it didn’t need to be. The Newland project was then approved by the Board of Supervisors. Now we are looking at a revision of the interchange.”

The change to the interchange was separated from the Newland project itself. “They piecemealed it,” says Dr. Eason. “Newland said it was up to Caltrans whether the interchange will be done.” 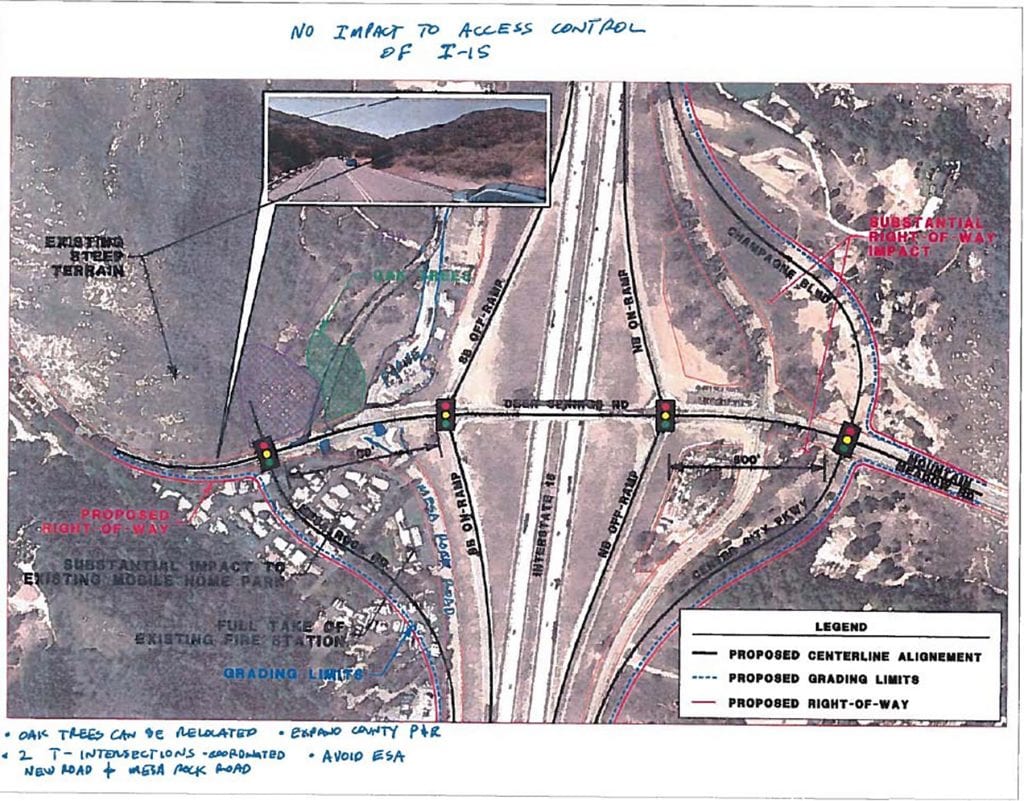 A document that was obtained through a California Public Records request from Caltrans shows one version of a proposed interchange for Deer Springs Road & I-15. At the lower left is the Deer Springs Oaks mobile home park, and the line going through it is a possible road for the proposed interchange, which was prepared by Newland Sierra. Newland Sierra has said that these drawings are out of date.

At this point, they say, neither the County nor Caltrans has agreed to conduct environmental analysis on any interchange improvements. “We’ve met with Caltrans, but it’s not so clear to them,” said Dr. Eason. “Caltrans has no position on which agency is the appropriate lead agency.”

Dr. Eason feels his community has been left hanging regarding the improvement to the interchange. “We’re still up in the air. If the referendum upholds the development there’s no timeframe. You know how long it takes Caltrans takes to do things.”

He added, “All during the negotiations we did not know if they are going to destroy our park.”

Latham and Watkins, using a California Public Records Act request, obtained several proposals to modify the interchange ramp. One shows a road going through the park.  Note: See our other article on Measure B to read Newland’s response to this particular issue.

“Even if we lost a few of our homes it would essentially destroy the park,” said Dr. Eason.  “That’s the issue unique to our park. What’s also so hurtful is they kept us in the dark. Already our park’s value as far as selling has been affected. An insurance carrier has stopped writing new policies because of fire danger from this development.”

Mrs. Higgins added, “We lost two buyers for one unit because of the Newland project. As the project goes on and the blasting  and noise starts, there will be no possibility of selling those homes.” She adds that Newland has made no offers to buy them out. “The only direct negotiations were for the wall,” she said. “They needed land from our park and asked us to sign that over to them on condition that we would never oppose them in any way.”

His group also dismisses as propaganda Newland’s statements that “It’s either us or ninety-nine homes and big box retail.” According to Latham and Watkins analysis, the terrain would preclude a “big box” retail that is currently allowed by the General Plan. “It’s going to be a long time before any commercial goes in because of the terrain, and access. Smart commercial won’t be building on top of a mountain. That’s 1.7 million cubic yards of cut and fill, and take off of the top of granite mountains.”

But the main objection to the project, say Dr. Eason and  Mrs. Higgins, is wildfire.

“If this is built we are in a high risk fire area and you guys on the other side are included,” said Dr. Eason. “This is 2,135 homes, which translates to 6,000 people and 80,000 square feet of commercial. This creates high density sources of ignition of wildfire. What causes wildfires is people and what they do, such as catalytic converters and mowing lawns.”

He notes that the “has never burned because there’s not enough sources of ignition.” Add to that mixture more homes, low humidity and high winds. “The sources of fire will still be there and adding ignition. It’s not a matter of if, it’s when it will happen.”

To make matters worse, said Mrs. Higgins, there are only two ways in and out of the project. “There’s no effective evacuation.” She is skeptical of the Sheriff’s Department which has testified that it can evacuate the project, and that if they can’t, the residents can “shelter in place.”

She is also skeptical of assurances of CalFire and the Deer Springs Fire Protection District  that they can safely evacuate residents along a two-lane road.

Dr. Eason forwarded an email from Mark Jackson, a member of the board of directors of the Deer Springs district—and incidentally one of the authors of Measure A, which would require a vote of county voters to amend the General Plan.

Jackson commented on the $4.4 million fire impact deal Newland agreed to pay Deer Springs. He writes, “Newland Sierra does meet State and County Fire & EMS coverage requirements, mostly because Station 2 is right over the fence from you and your neighbors and arrives within the required 5 minutes. As much as everyone including a majority of the Fire Board does not like the  development in this place, Fire Districts can’t discriminate on who they serve without really good reasons.”

He adds, “Newland is required to pay at least $ 2 million in impact fees, which get paid a drop at a time when they pull building permits. The Fire District negotiated a $ 4.4 million impact fee package, with a large chunk upfront when grading starts. So, $ 2 million or so extra was negotiated by the Fire District,” Jackson wrote. “From the  Fire District’s Board perspective, it was to replace the aging manufactured housing that’s there now quickly ahead of  added demand if the Newland project went forward despite the Community’s opposition.”

Jackson concluded, “But what’s for certain is that  a Fire Board approval was not bought by increased Developer payola.”

Dr. Eason is concerned that a fire such as the Lilac Fire of 2017 could cause a catastrophe if Newland is built. “That fire was ten miles from us,” he said. “Everything was solid red. Everyone was stopped. We couldn’t get out of there if we tried. That will happen again in spades. The effects of the fire will cause worse blocking on the 15 extending from Temecula down to Rancho Bernardo. Tie in a regional evacuation and it’s a recipe for disaster.”

Dr. Eason added, “The danger from wildfire is almost a sure thing. If you live in El Cajon or some other city, you will be affected by the additional traffic and I-15 would be worse than it is now.

Mrs. Higgins said, “There are already thousands and thousands of homes on the books. Build those first.”

Dr. Eason argues that there is no infrastructure now where Newland wants to build. “That’s why they have to charge so much, filling in ravines, and modifying terrain to make it buildable adds to the cost. They bought the land cheap and they will make a lot of money off it. This property was not zoned for much residential for good reason.”

He concludes, “The General Plan took thirteen years and $18 million was participated by local planning groups. It was zoned that way for a reason. There’s no infrastructure, no sewer. To change it so soon and so grossly. If this continues we’re going to be in the sprawl abutting against Orange county. It’s our last buffer. In the meantime, our park becomes collateral damage.”

For more information about the No on Newland Sierra campaign, visit www.noonnewlandsierra.com.