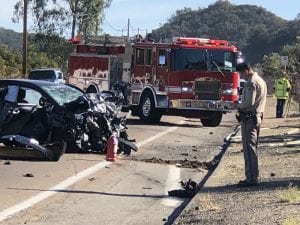 On January 17, 2018 at approximately 12:33 PM a 58 year old female from Alpine, California was driving her Lincoln Continental northbound on Champagne Boulevard south of Champagne Village Drive at a high rate of speed, within an unincorporated area of Escondido.  The driver of the Lincoln Town car passed a GMC Acadia traveling in the same direction driven by a 64 year old male from Othello, Washington.  A Toyota Corolla being driven by a 63 year old female from Antioch, California approached the other vehicles traveling southbound.
A head on collision occurred between the passing Lincoln Continental traveling northbound within the southbound lane, and the Toyota Corolla traveling southbound.   The driver of the GMC Acadia that was passed avoided the collision directly ahead of them by veering to the right shoulder.  The Acadia continued off the roadway, over the dirt shoulder, and down the embankment east of the roadway where it overturned onto its roof.  The Toyota Corolla came to rest within the southbound side of the road facing a northwesterly direction.  The Lincoln Continental came to rest within the northbound side facing a southwesterly direction.
The female driver of the Lincoln Continental sustained fatal injuries and died at the scene.  The female driver and male passenger of the Toyota Corolla suffered major injuries and were transported to Palomar Medical Center.  The male driver and female passenger of the 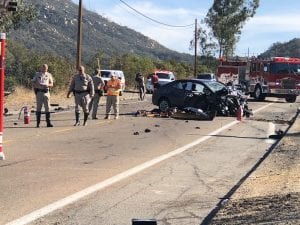 One response to “Three Vehicle Fatal Collision on Champagne Boulevard”