an Escondido resident since 1960 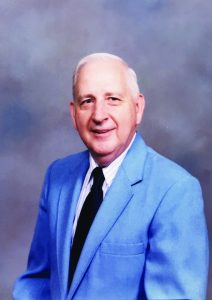 Mr. Edgington was born February 1, 1925 in Bellbrook, Ohio and was the youngest of nine children. He enlisted in the U.S. Army Air Forces at the age of 17 and served as a radio operator on a B-24 in the European Theater of Operations during WW II.

Mr. Edgington was employed by Ohio Bell, Pacific Bell, and AT&T for 37 years. He coached Little League baseball in Escondido and was an active member of the Christian Church in Escondido for many years. He is survived by his wife, Doris Edgington, sons Michael (Brenda) and Steven (Teresa), and granddaughters Kayleen and Julie. A memorial service and celebration of Mr. Edgington’s life will be held April 22, 2017 at 11 a.m. at Pomerado Christian Church 12708 Stone Canyon Rd., Poway.