“They Shall Not Grow Old” sets new standards for historical documentaries 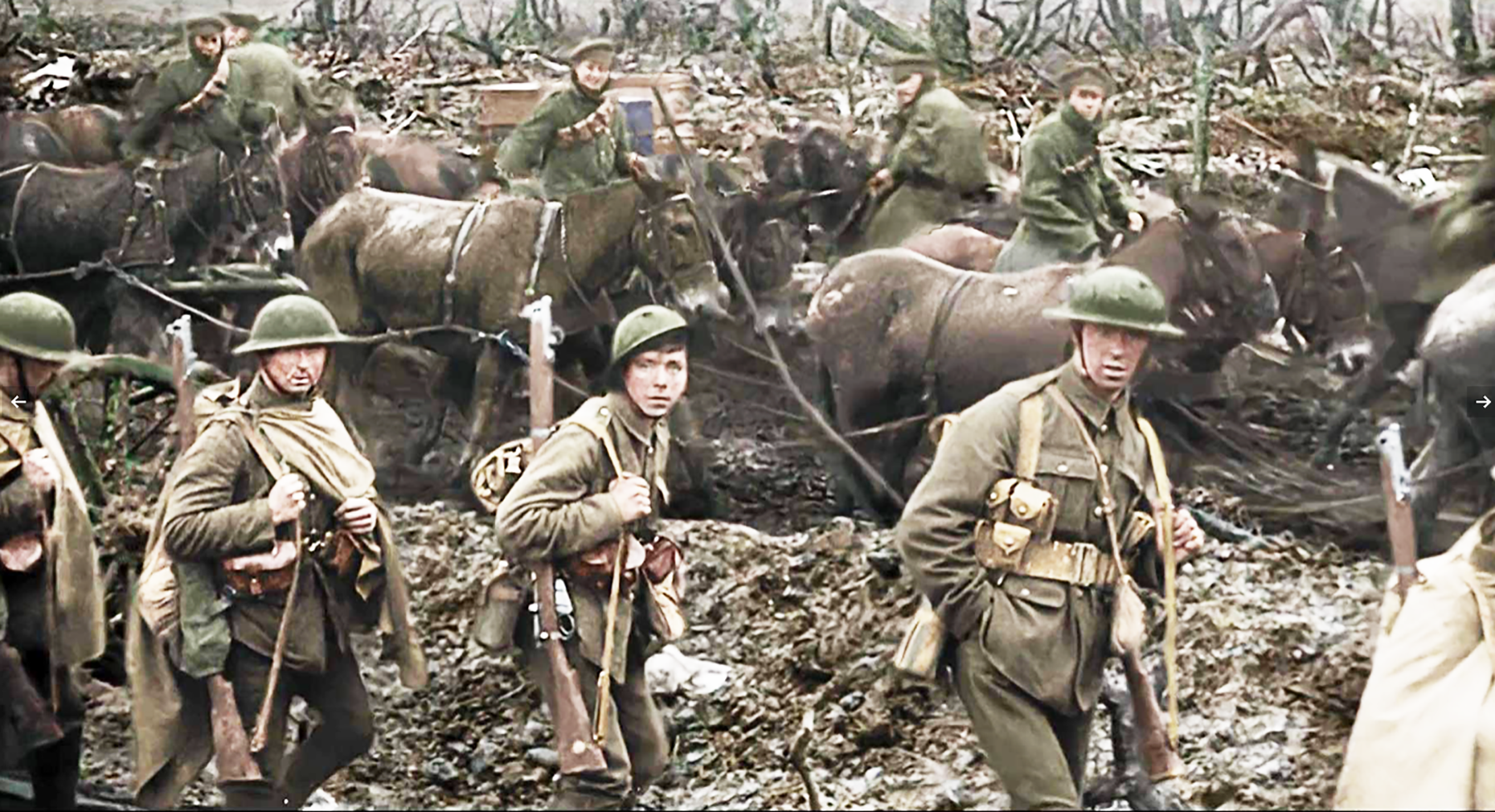 Young British soldier look in wonder at a camera making a film about them.

Director Peter Jackson has done something remarkable and historically significant with his splendid filmic achievement “They Shall Not Grow Old” which is now playing in local theaters.

For those whose knowledge of The Great War (1914-1918) is limited to the grainy, jerky, black and white silent films of a century ago, “They Shall Not Grow Old” is visually stunning in that it is in vibrant, living color, synchronized to the proper film speed and—most astonishing, with voices!

As the friend who attended the screening with me, and who knew almost nothing about the war beforehand observed, “The extremes they went to, to take the films from the archives and achieve a modern look for the modern age for us to understand, made them seem more human and real because of that.”

Human they definitely become in the loving hands of Jackson. Very, very, human and very young. They tell their stories in their own words, with oral histories that were preserved of many of the survivors, who were interviewed after they had beaten all the odds and grown old.

They grin at the camera, which all of them regard with a kind of shy, yet wide-eyed wonder. One has to realize that as they march by, or are caught as they catch of few moments of rest, a film maker is standing nearby slowly hand cranking the camera. Because the cameras were turned by hand, the frames went by at a variety of speeds that ranged from 12 to 17 frames per second, compared to the modern speed of 24/sec. Although most people had seen moving pictures, it was rare to see someone filming one. Not like those of the modern day who crowd each other by the elbows to jam into “selfies.”

“They went into it so blind but willing. Too young,” said my friend. It is truly heart rending to realize that most of the young men on the screen are gone—not to the centuries but to the all-consuming maw of war, one of the most pitiless and senseless wars in history.

This was obviously a labor of love for the New Zealand filmmaker, who would causally let slip pieces of information such as the fact that he has a personal collection of Allied uniforms that his technicians used to achieve authentic colors when they were colorizing the black and white footage. Or that he just happened to have a piece of artillery from the period that he was able to use to reproduce the distinctive sounds of firing of such a piece of ordnance, such as opening the breech and slamming in a shell.

In fact, the film at the end of the film where Jackson chats at great length about how they achieved the wonders of the film might be the most fascinating part of “They Shall Not Grow Old.” Jackson, who is a wonderfully slovenly creative soul who walks everywhere in bare feet, and unkempt beard and hair, loves to talk. And talk. And talk. Not he the shy genius who has to be prodded into revealing his secrets.

Much of the films had been languishing in the archives of the Imperial War Museum, which contacted Jackson and asked him to make a film commemorating the centenary of the war, which was the first war to truly involve almost every nation on earth in some form or another.

Watch this film and you will find yourself forgetting that it was a century ago. It’s easy to do, and easy to be immersed in the humor and horror that was the war of the trenches. * * David Ross has a master’s degree in Military History.