There’s a long line at Habit Burger: We think we know why 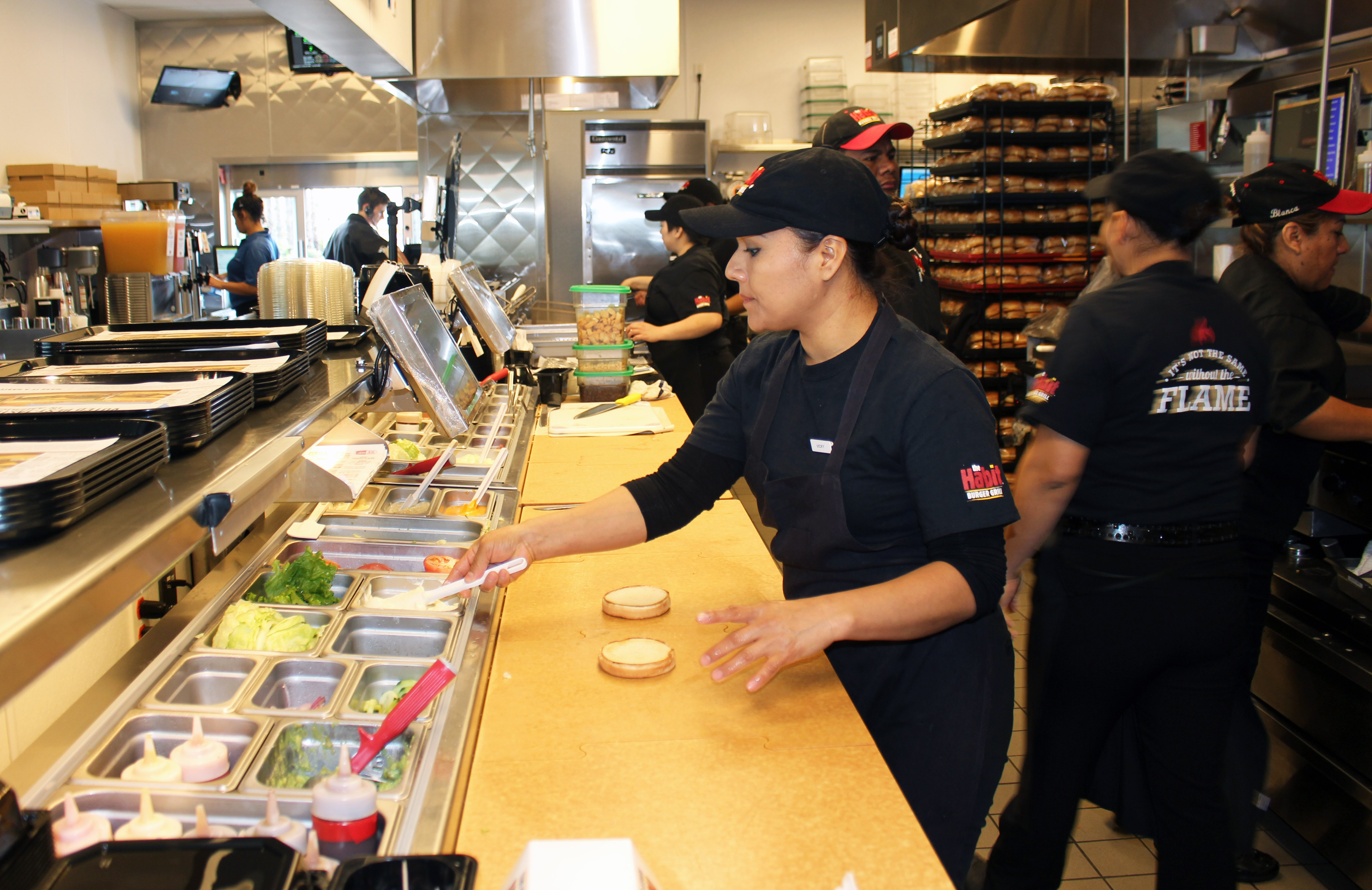 What makes the Habit Burger special? “Our people,” says District Mgr. Chris Folcka. “They believe in what we do.”

Just about any time you drive by the newly opened Habit Burger in Escondido, there is a long line of cars in the drive-through.

I think I know why.

The newest Habit Burger opened January 9 at the corner of Centre City Parkway & Mission. According to District Manager Chris Folcka, what makes the Habit Burger different from other burger restaurants is: “Our people focus on crafting the perfect burger.

Business Insider wrote in 2015: “Habit Burger is on fire. The regional burger chain beat out In-N-Out, Shake Shack, Five Guys, and McDonalds to take the title of best burger in America, according to a survey by Consumer Reports released earlier this year.”

In 2017 Huffington Post wrote: “If you’re a real burger aficionado, you might guess In-N-Out Burger, the regional chain with a national appeal. Whatever your assumption, you’d probably guess wrong. That’s because the country’s best burger comes from a chain you’ve probably never heard of, unless you’re from California, in which case you’d better have heard of it. According to Consumer Reports, the best fast food burger in America is from The Habit Burger Grill.”

So we know Habit Burger is the best. Why are they the best?  According to Folcka, “We score our patties to hold all the good stuff in,”  he says. “Our company culture is smiling faces. Our employees believe in what we do. Our cooks are chefs who craft the food. We believe in grilling it on the char grill. You can taste the difference.”

Entrees, such as the tri-tip for the Tri-Tip Steak sandwich or the ahi for the Ahi  Tuna Filet (which is sushi grade) are cut by hand and the foods (with the exception of the fries) are never frozen.

The company was born in Goleta, California, near Santa Barbara in 1969 where some brothers bought a burger restaurant and began to run it under their own philosophy of cooking over a char grill. Now, 50 years later, they have expanded to 13 states on both coasts. They are currently opening between 25-30 locations a year.  The company is listed on the Nasdaq exchange as HABT.

The restaurant celebrated its Grand Opening with a fundraiser for Escondido High School in which it donated 100% of the first day’s profits, or $2,600.

If you have a non-profit and want to raise some money, Habit Burger will do a fundraiser with your organization in which the organization gets 20% of the profits.

Even though the restaurant has a drive-through, the orders are still made to order, without the use of heating lamps or steam tables. “It comes right off the char fire,” says Folcka.  He explained that the company’s philosophy is “quality food and above and beyond hospitality. It’s all about great service. Our philosophy is quality first, speed comes second. We figure that people would rather wait an additional thirty seconds, rather than just be full after.”

I sampled several items. The Onion Rings were crunchy and tasty. The Sweet Potato Fries were not salted to let the subtle flavor shine through. The Tempura Green Beans were also outstanding. The French Fries were very good.

My favorite entrée was the Ahi Filet sandwich, which I got served on sourdough bread. The ahi was lightly browned, and slightly pink inside. You can get it rare, but mine was medium. It was succulent and juicy and I’ll definitely be back to have it again.

If you like to have your food delivered to you by one of the many myriad services, Habit Burger works with Door Dash, which can be ordered on the Habit Burger website. www.habitburger.com

Habit Burger has definitely put the other burger places in town on notice that they had better up their game significantly if they want to play in the same league. 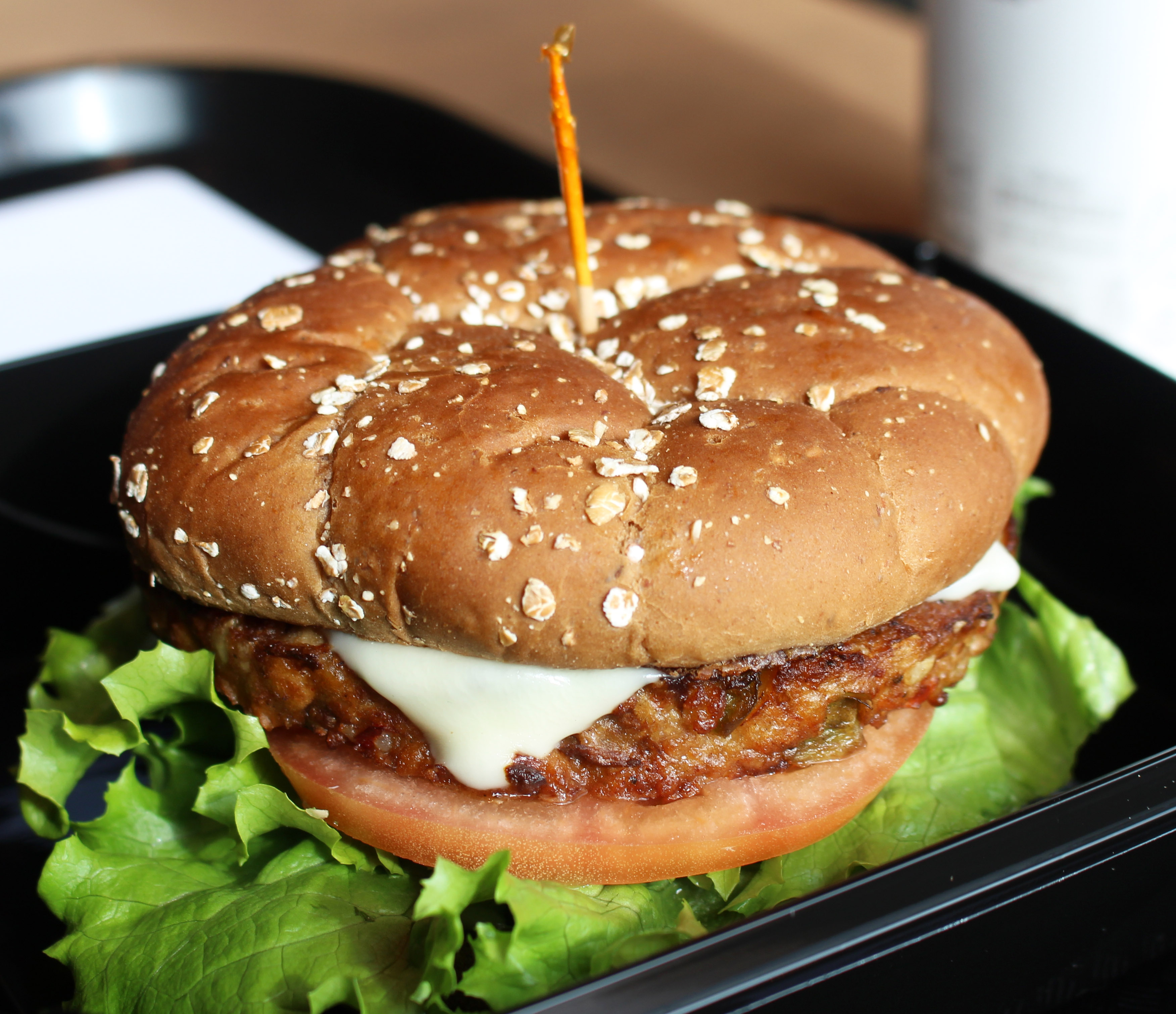 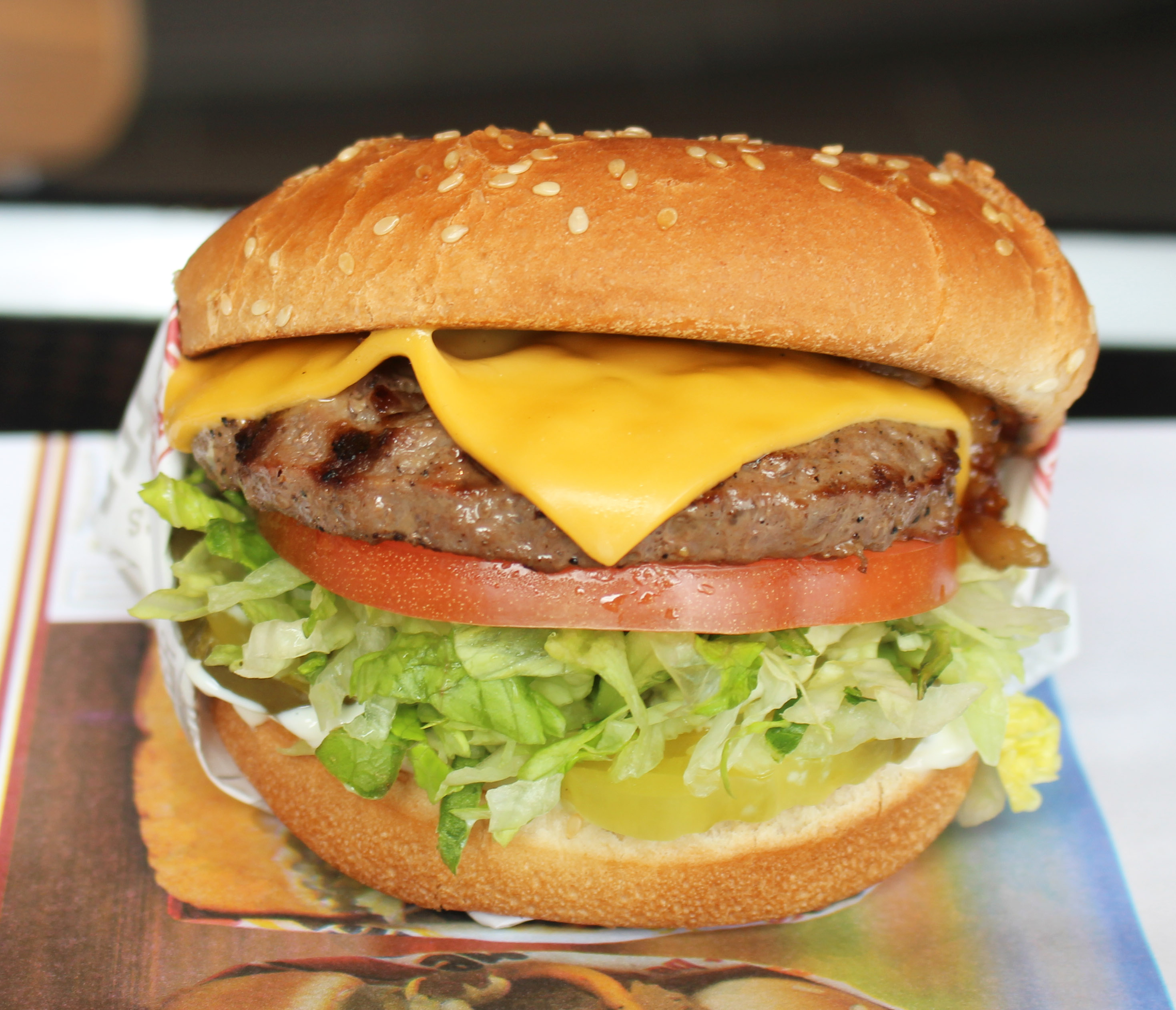 The succulent Charburger with Cheese. 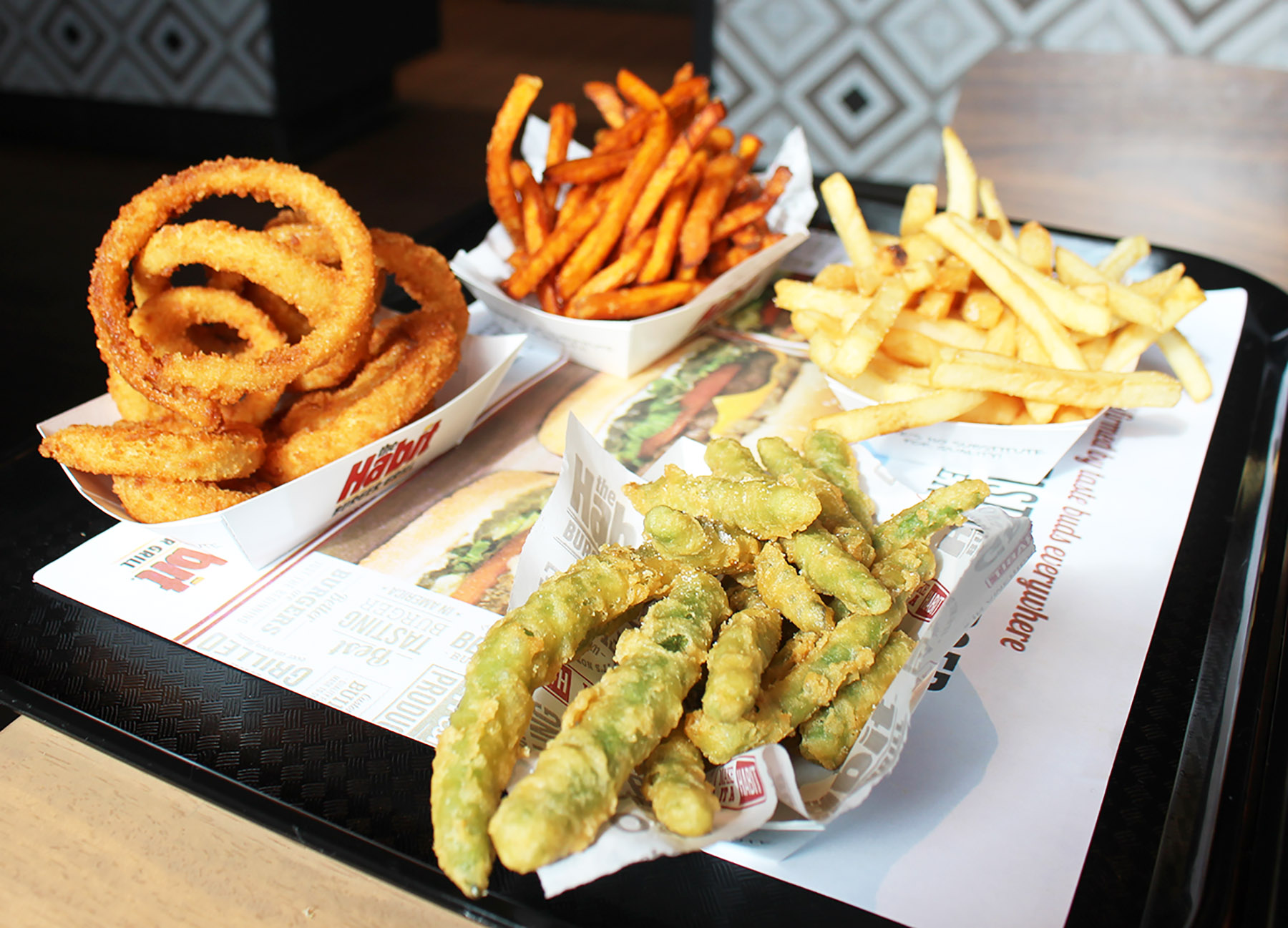 Hard to choose between these samplings of Onion Rings, Sweet Potato Fries, French Fries and Tempura Green Beans. So we tried them all! 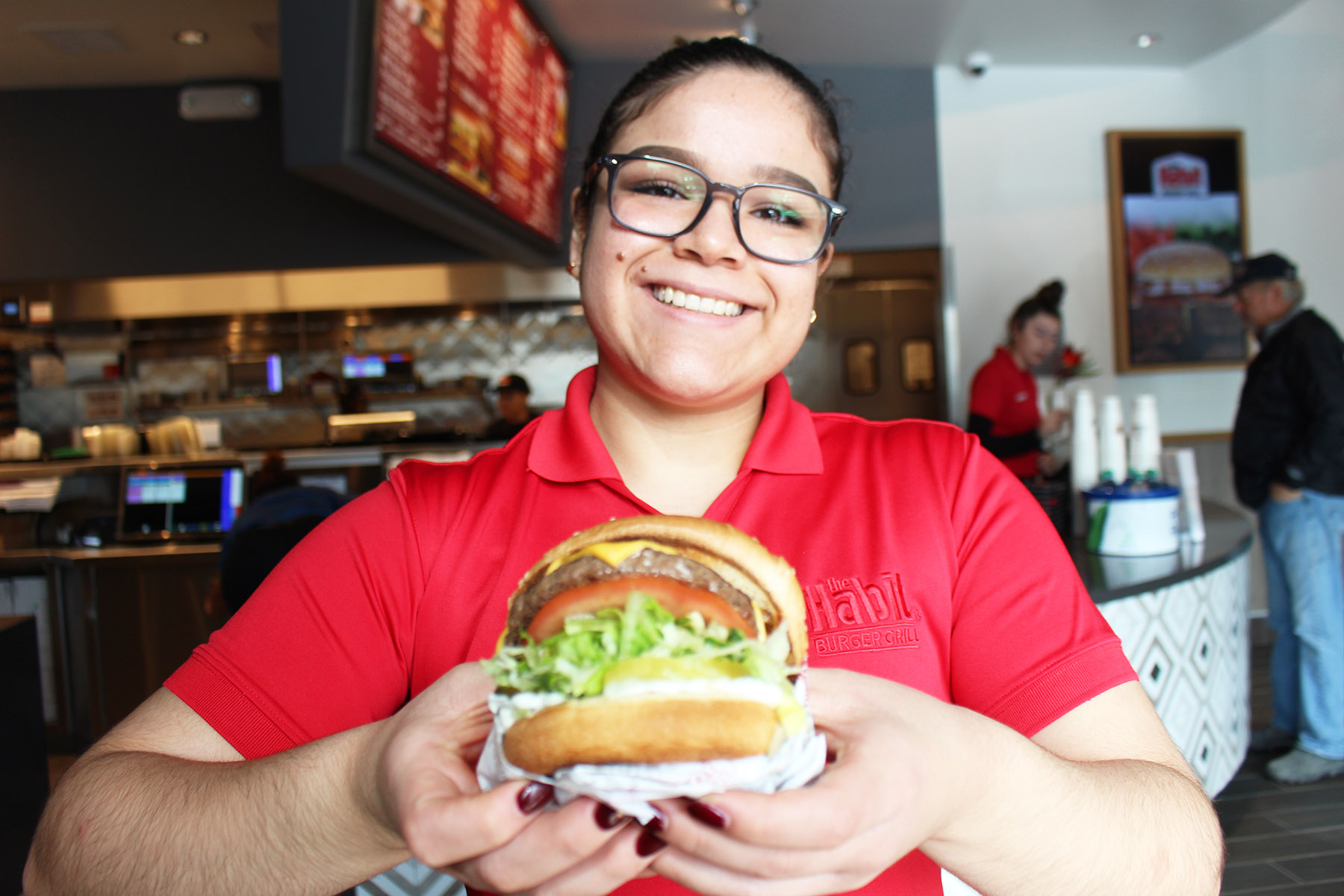 Michelle Zoza of Escondido Habit Burger with the restaurant’s signature burger, the Charburger with Cheese. 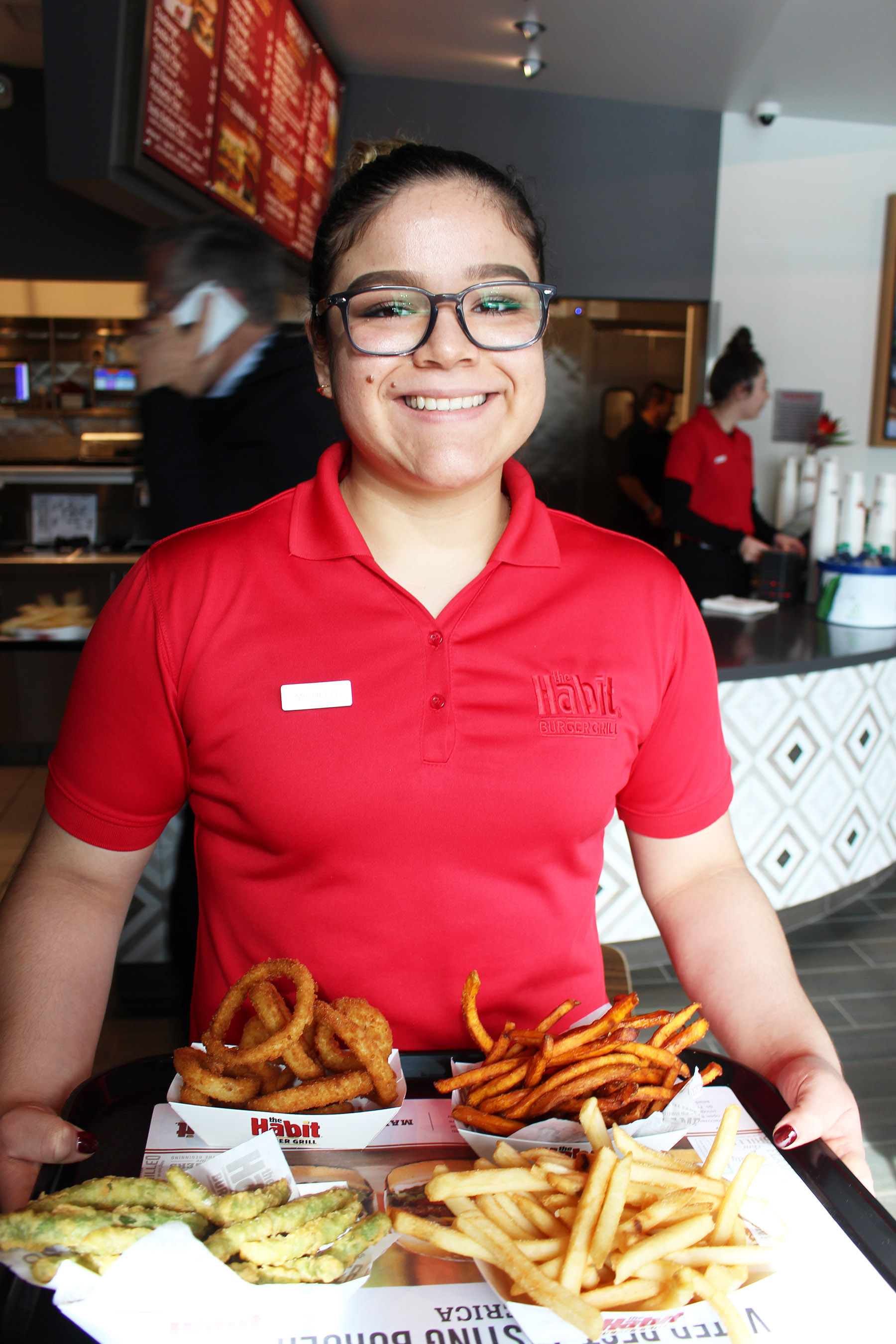