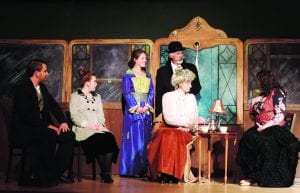 Titled “Passage Into Fear,” the play is set onboard a transcontinental passenger train traveling from Venice to Zurich, Switzerland during the waning days of World War I. An elderly woman, Mrs. Lillian Merriweather, boards the train insisting she knows of a sinister plot with vast international repercussions, then promptly disappears. Other characters include a young American woman on a final fling in Venice before returning home to be unhappily married, a pugnacious 7-year-old war orphan, a Member of Parliament and his wife, a Spanish gypsy who has wandered the continent most of his life, a sinister Indian doctor hiding an immense secret, and a ruthless German countess bent on achieving her evil ends no matter who gets in her way. The solution to Miss Merriweather’s disappearance ultimately has roots in understanding the very causes and history of the war itself.

The play was originally performed in partnership with CSU San Marcos and the San Marcos Historical Society and, most recently, at the San Marcos Civic Center and Patio Playhouse Theatre in conjunction with nationwide centennial observances of the Great War.