The Wooden Spoon: where comfort food is king 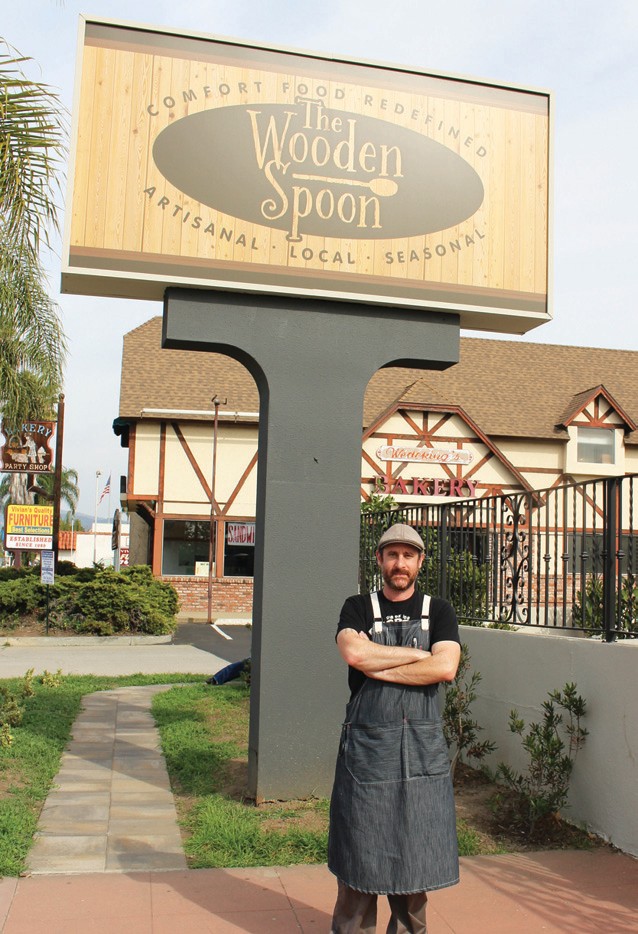 Restaurateur Jesse Paul in front of the sign for his eatery, which opens this week, amid much anticipation by passersby.

Comfort food is not exclusive to the American South, although that may have been where the term originated. Every culture where there is a grandmother waiting in the kitchen making something like chicken soup has comfort food.

“Comfort food just makes you feel good,” says Jesse Paul, who opened his first restaurant Tuesday in Escondido at 805 E Valley Pkwy after months of tantalizing potential customers with his sign that promised “comfort food redefined” along with “artisanal, local and seasonal,” foods.

These are all terms that will set the taste buds of serious foodies vibrating with anticipation and a little impatience. A day didn’t go by where someone walking on the street didn’t call out asking when the Wooden Spoon would be opening. It wasn’t Paul’s fault that it took four months to finally get the permits to open. Chalk it up to city regulators.

“The support from the community has been overwhelming,” says Paul.

But to return to the food: “Everything we serve will be recognizable in flavor but with new cooking techniques,” says Paul, who promises to use local produce, which means that his menu will reflect the seasons.

If you are familiar with the term “farm to table,” you have an idea on what Paul has set his sights to achieve, where you buy the food in the morning and serve it that day. They don’t freeze anything, except for ice cream, which they do make in house.

Paul is his own butcher, and if you are a pork lover, you may want to be lined up for the next time the Wooden Spoon opens its doors. “I love cooking with pig,” he confesses with a grin. He also loves seasonal produce and buying from local growers. “I want to support the local farms.”

Although the menu will vary depending on the variable of the seasons and availability of meats, it’s a pretty good bet that one 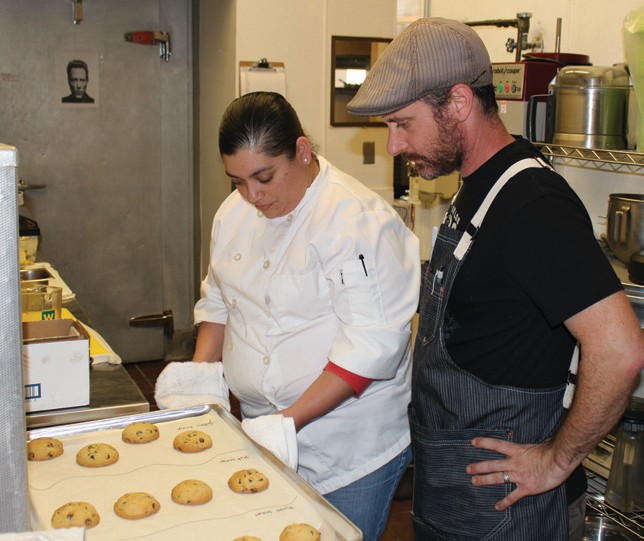 The Wooden Spoon will serve baked to order cookies and milk as part of their comfort food menu.

of the items on the menu the first week of operation will be pork roast, stuffed with homemade sausage and wrapped with smoked bacon, served with collard greens and grits. Did we say that Paul likes pig?

The menu will also likely offer meat loaf with mashed potatoes, homemade ketchup and baby carrots. Appetizers will include sweetbreads served with lemon aioli. The menu will also normally feature a salad and soup of the day.

Vegetarians and vegans need not despair because there will be delicious options for them, as well, such as blackened Japanese eggplant with green curry, cauliflower couscous and blood oranges.

They make their own pickles and sauerkraut. “Everything we do is made in house,” said Paul. “We are trying to be one hundred percent organic and GMO free.”

The Wooden Spoon is Paul’s first business and his first restaurant, although he certainly knows his way around some of the best kitchens in San Diego County. A chef for 18 years, Paul worked for seven years at the Vivace – Park Hyatt Aviara in Carlsbad, was the executive chef of the Star of the Sea Room at the Embarcadero and was also chef at the L’Auberge Del Mar and Top of the Cove in La Jolla.

The Wooden Spoon is definitely a family enterprise. Besides Paul and his wife Catherine they hired his mother to work in the front of the house and sister-in-law to wait on tables.

Let’s talk about prices. For such cuisine you might expect to say goodbye to a lot of green. In this case, however, you won’t. “Everything will be under $20,” says Paul. “You are not paying for the expensive china or the fancy uniforms. I can do the same thing they can do for half of the extravagant fees.