“The Producers”: another Moonlight triumph 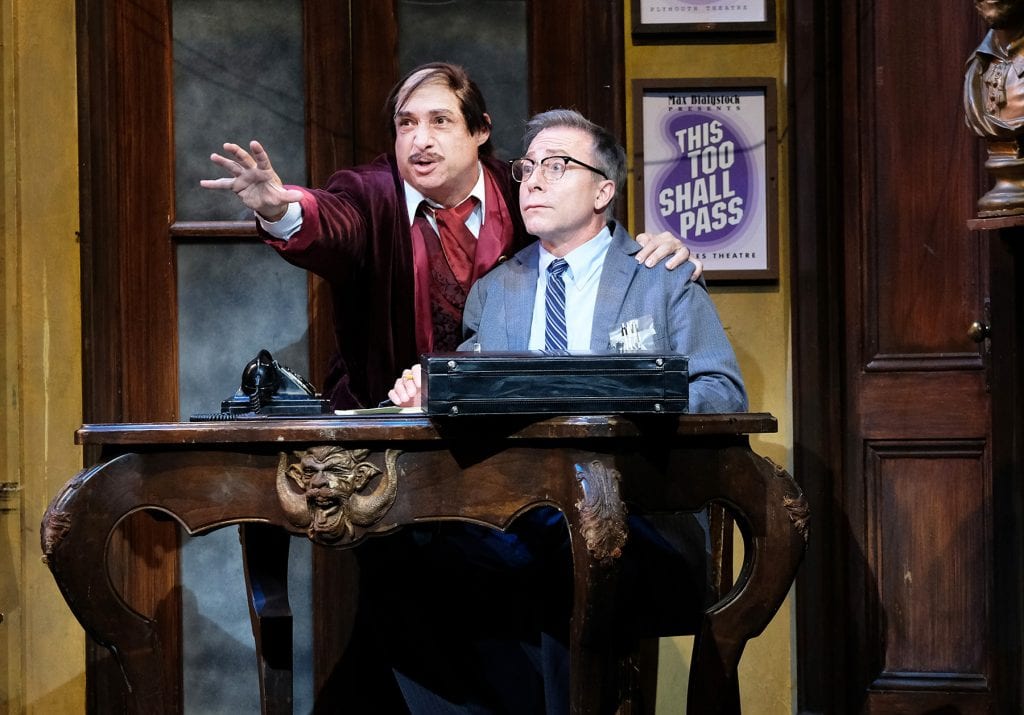 Max Bialystock, Jamie Torcellini, works hard to sell Leo Bloom, Larry Raben on his scheme to produce a show doomed to bomb—and get rich doing it.

Several days after watching the Moonlight Amphitheatre’s opening night performance of “The Producers,” the main theme song from the production, the tune “Springtime for Hitler” is still inhabiting my head. But not in a bad way.

“The Producers” plays now through June 29.

The show was great, of course. How could it not be? Especially since the director, Larry Raben—who also plays Leo Bloom in this production—originally worked with his idol Mel Brooks on the Broadway version of the musical around the turn of the Millennium. It was there that he first played Bloom—the extremely nervous bookkeeper who has a tendency to yammering panic attacks and always keeps a blue baby blanket close at hand to comfort him.

Bloom was given life in 1967 by the incomparable Gene Wilder, and the character was revived in the 2001 Broadway Musical where Matthew Broderick gave his own unique imprimatur to the part.

In the original movie, where Wilder starred with the legendary Zero Mostel as Max Bialystock, the only musical numbers were on the stage of the production of the fictional Broadway show that was supposed to be doomed to bomb. Where the two shysters plan for it to bomb because, as they hope, it will be so awful that audiences will run away from it.  That way no one will notice that they have walked away with hundreds of thousands of dollars from credulous but rich older women of “Little Old Lady Land” who Bialystock services in return for funds to put on his smelly productions such as “The Breaking Wind” and “Bialy Hoos of 1942.”

In the 2001 Broadway version songs and dance numbers were added, such as “When you got it, flaunt it,” which introduces the Swedish scene-stealing Ulla, played by Katie Barna, an actress so statuesque as to  make Lady Liberty in the New York harbor seem like a Muppet. She arrives to be the secretary at the new production company, and immediately turns both men into jelly.

In the Moonlight production Bialystock is played by Jamie Torcellini, who definitely channels the Nathan Lane version, and in fact somewhat resembles him. When Bloom shows up at his office to do his books and informs him that they are a disaster, he muses that it would be possible to make a financial killing if one were to deliberately put on a bad show that was doomed to fail.

In “I wanna be a producer” Bialystock convinces Bloom to leave his soul-crushing job and take a chance on success.

So they set off to find such a bomb. When they find a musical written by one of Hitler’s adoring minions, a loony character named Franz Liebkind (Luke H. Jacobs) who lives on the top of a skyscraper where he raises pigeons. Bialystock invites Bloom to smell and touch the cover of the script. “It’s the Mother Lode!” he says reverently.

They go off in search of directors and actors who will match the awfulness of the script.

But “Springtime for Hitler,” where Hitler is portrayed as a chump and a buffoon  and Nazis put on Busby Berkeley style dance numbers, turns out to be an unexpected success, which creates all sorts of problems for the boys.

The play is delightful, wicked fun that hasn’t lost an ounce of its satirical edge, even though the material is almost 60 years old.

The direction and the sets of this production are outstanding, as with most Moonlight productions.  Like me, you will find “Springtime for Hitler,” occupying your head for days on end. 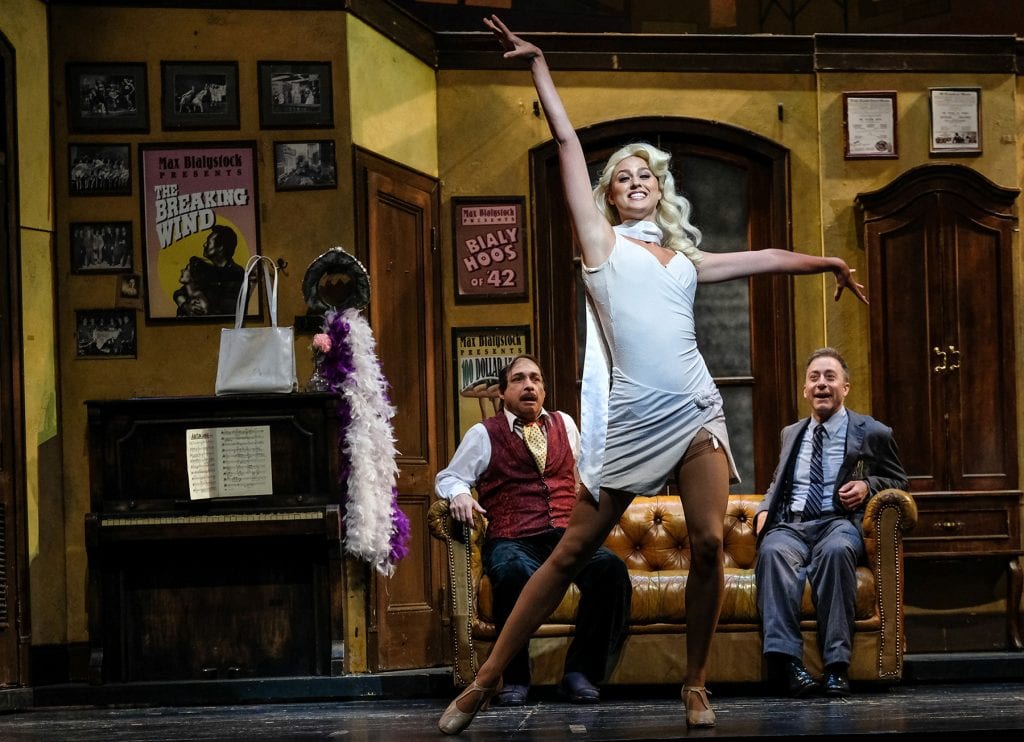 The Producers, Max Bialystock, Jamie Torcellini, and Leo Bloom, Larry Raben, are stunned as Ulla, Katie Barna, performs “When you got it, flaunt it.”