The Patriots hope to lead the league and reclaim CIF 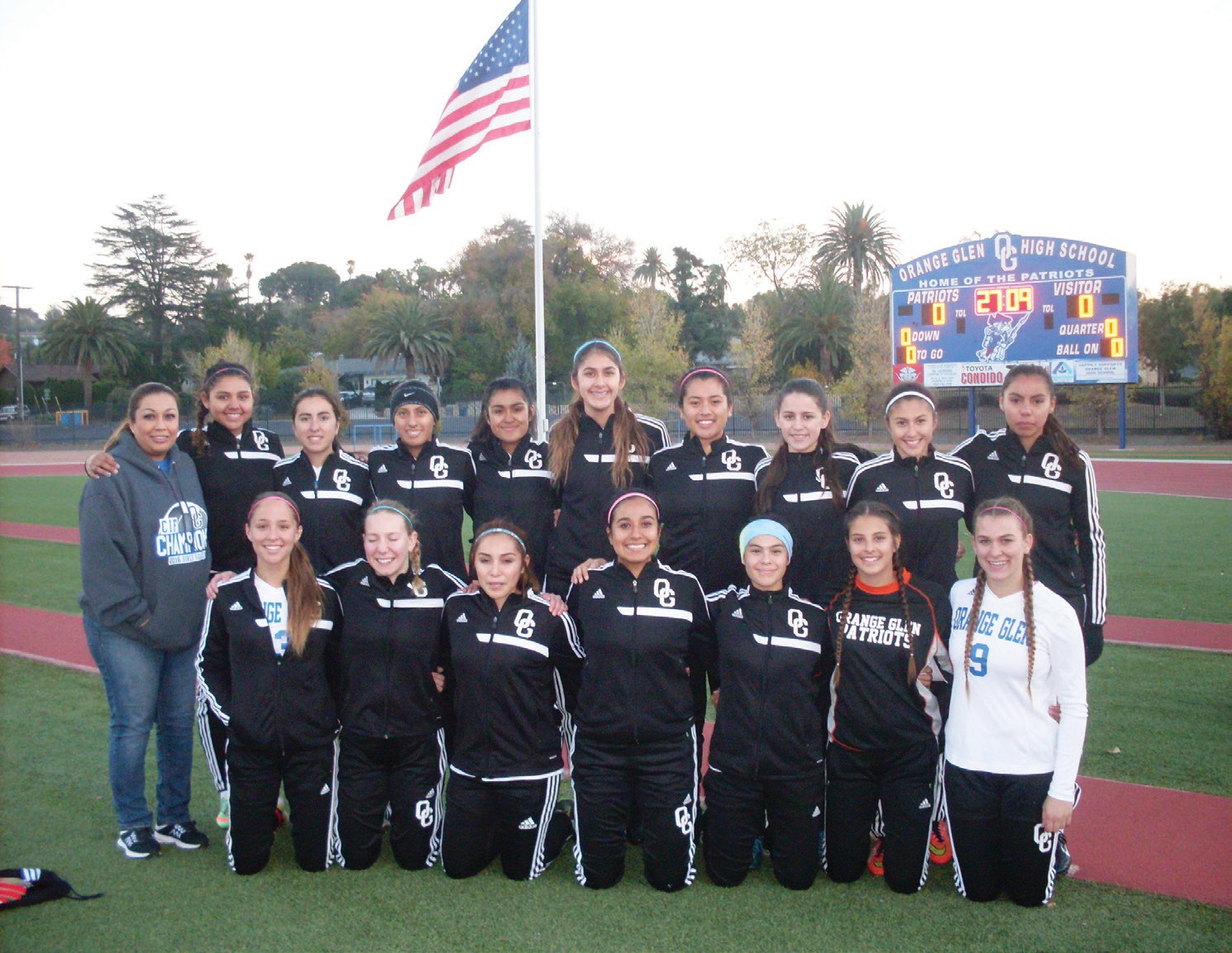 Orange Glen High School plans to dominate yet another season of girls soccer this year. With an assembled group of talented athletes and a dedicated coach, this season promises to be one of consistent victories.

Despite losing many of last year’s seniors, the Patriots remain hopeful that they will play stronger than ever this year. Bringing their wide array of talents, the girls hope to combine their individual strengths into a united and unstoppable team. Their CIF championship from last season still fresh in their minds, these athletes will not accept defeat. Using their speed, excellent communication, and high scoring percentages, their goal of becoming the league champion is entirely plausible.

Each member of this team maintains a confident position when it comes to their skill level as a whole. “We’ve got a good offense and our shots are more on target than in past years,” explains goalie Rocky Read.

The team credits these improvements partially to their excellent communication skills. They truly understand the importance of a team that not only contains many skilled individuals but also operates well as a unit.

Senior Briana Wintner explains that they are continuously working on improving their chemistry: “With a lot of new players sometimes the team can be separated between old and new.”

Noemi Ramos, another upperclassman, believes their team chemistry is consistently getting better, as they learn how to work together and communicate effectively on and off the field. Their desire to improve communication with each other demonstrates their determination to perfect every aspect of their game.

Coach Brenda Hernandez emphasizes the need to “sync everyone up together, and make sure they’re all on the same page.” As most of the girls play for different competitive teams throughout the off-season, it’s incredible how well they are able to come together and support each other even during preseason practices. Each young athlete is absolutely dedicated to being a part of the betterment of her team. Focusing on improving not only as individuals but also as a unit, they are working together to become stronger than ever. Their beliefs in each other’s abilities and the team’s capabilities as a whole are a big part of why they will be successful this year.

Another crucial asset is this team’s amazing movement on the field. The offense is experienced, quick, and aggressive. “They’re fast, they’ve got a lot of speed,” boasts Hernandez. Their “mile is under 6:30 as a team,” adds Alexia Bruzzi, a 4 year Varsity player. Bruzzi herself holds the record for the most goals scored, and hopes to defend that title this season. Many of the seniors this year, in addition to Bruzzi, will prove to be crucial members of the team. Hernandez firmly believes “this years’ ten seniors will step in the shoes of last year’s and make them, and all the alumni proud.” The girls also hope to not let each other down, each expressing a desire to focus and play hard in order to bring up the team’s overall abilities. A team that is so successful as a whole clearly has motivated individuals, whether old or new.

While team’s experienced offensive players continue to improve and focus on remaining motivated, the defense rests mostly on the shoulders of the younger members of the team. These new varsity members strive to join with the returners in almost entirely rebuilding the team’s defense, certainly no simple task. “We pretty much lost our defense,” Bruzzi sighs. After such a victorious season last year, it’s difficult to lose part of what made the team so successful and still be hopeful for this year. For the Patriots though, it seems they have no trouble remaining optimistic. Grace Bickford, one of the Varsity team’s strongest players for the past four years, is sure the team will be able to adjust and modestly hopes she can “play well for the team and help them out.” This positive mindset found so readily throughout the team will undoubtedly prove beneficial in overcoming the daunting task of forming a new defense.

Senior Daniela “Danie” Cruz explains the importance of going “into games with the right mentality” and “working hard because you don’t want to let your team down.” While there’s a lot of pressure to keep up the overall skill level of the team, the girls don’t want to get overwhelmed. Ramos stresses the importance of “not getting frustrated or mad” during games. For the seniors especially, it’s not just about winning the league or defending their CIF championship. They also want to focus on enjoying their last year playing with the friends they have grown close to over the years. While having a season filled with wins and new records is important to each of them, being able to enjoy this time is also a pressing matter. “It’s not only about working hard but also about having fun and taking it all in,” details Cruz. As long as they are putting their all into every game and maintaining a positive mindset, the year can be enjoyable as well as successful.

Each young athlete demonstrates a clear desire to be a valuable asset to the team. The girls bring everything they have to practices and games, combining their skills to form a truly talented team. Hernandez expresses that she feels “great about this season because for the first time we’re already strong at the beginning of the season.” She continued to explain that this is an important advantage because the girls will be able to “build on that” initial strength and become an even more intimidating force. Their quickness and aggression offensively will only continue to improve, while their determination and hopeful attitudes will undoubtedly aid in the reconstruction of their defense.