The Packards and Pierce Arrows are coming: Grand D’elegance, June 19 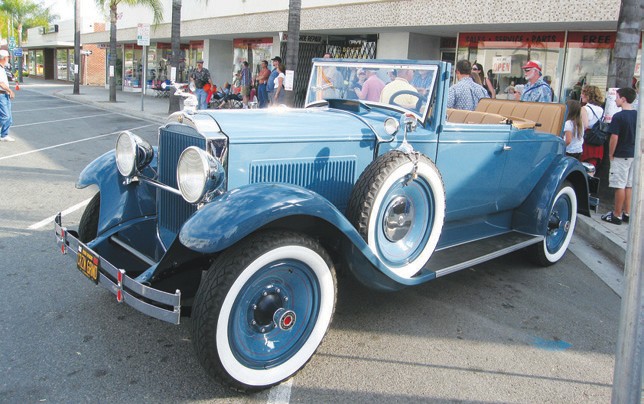 One of the nicest cars that will be featured at the June 19 Grand D’elegance is Karl Ramsing’s 1929 convertible coupe.

The Packards, once considered the finest car manufactured in America are coming to Cruisin’ Grand on June 19, in an evening dubbed Grand D’elegance by organizer Steve Waldron.

The San Diego Packard Club will bring 25-40 Packards and six to eight Pierce-Arrows and possibly a 1936 Cadillac. Two of the nicest cars they will bring are a 1929 Packard convertible coupe and 1935 Packard V-12 Limousine.

Waldron, who is always a walking encyclopedia of automobile history, notes: “The cars were manufactured until 1958 by the Packard brothers.”

The Packards will go on a parade, beginning about 5 p.m. “That will be quite a sight to see, those big Packards rolling down the street. We get Packards from all over Southern California and Nevada coming to this event.

He adds, “These cars are beautiful and elegant. There are a lot of features on those Packards of the 1930s that you will find on cars today. The headlights would turn when the wheels would turn. The cars had a cruise control option, and a speed option. The cars had this phenomenal engine, a six and an eight and cylinder model. They were big and heavy and had a phenomenal torque.”

Recently, said Waldron, he took a ride in an old Packard and “It’s a very impressive drive for a car that is eighty years old.”

The cars have been meticulously restored. “They were American designed and American built through and through,” he says.

Music will be provided by a DJ rolling out Big Band tunes, the Bel Rio Band, and a 60s rock band, Rudee T.

Waldron says attendance, “has been incredible! I’ve been taken aback at how many people have been coming to this thing. Opening night has always huge and then it backs off. Not this year! It’s been big crowds every Friday. Quite exciting. It’s taken us off guard in a good way. It’s been exceptional.”

Packard Motor Car Company was founded by brothers James and Ward Packard in 1899 in Warren, Ohio. The idea to build their own car originated from their purchase of an 1896 Winton. They had many problems with it and complained to the owner, Alexander Winton, on multiple occasions about the quality of the car. Winton grew tired of their complaints and finally said: “If you can build a better motorcar yourself, build it.” That’s exactly what they. From the beginning it was their goal to build the highest quality automobile possible. The company grew quickly and they moved it to Detroit in 1903.

During the 20’s and 30’s, Packard set the automobile quality standard in the U.S. and led the industry until after WW II. Their sales slogan was: “Ask the man who owns one.” During the 20’s, the top quality vehicle makes in the U.S. were “The three P’s: Packard, Pierce-Arrow, and Peerless. Cadillac was a distant fourth. In the thirties Packard became known as America’s Rolls Royce. For nearly 60 years, Packard reigned unchallenged as “The Soft Spoken Boss of the Road” – the supreme combination of all that is fine in motorcars.

Packard felt the Depression and in 1935 began offering a line known as “Junior Packards.” These were still high quality cars but priced below $1,000, thereby allowing more of the buying public to afford one. The Junior Packards were very successful and saved the company from the same fate (bankruptcy) experienced by Peerless and Pierce-Arrow during the thirties.

Cadillac and Packard became equal in quality reputation in the late 40’s and Packard sales slowed in the 50’s. In 1954 Packard merged with Studebaker and became the Studebaker-Packard Corporation. Studebaker was in poor financial shape and the company could not afford to build two lines of cars. In 1956, the last Packard rolled off the assembly line. For the next two years, the company made a car named a Packard but was really a Studebaker with Packard taillights, headlights, and special trim. Referred to by the public as “Packard-bakers”, the last of these cars were built in 1958.