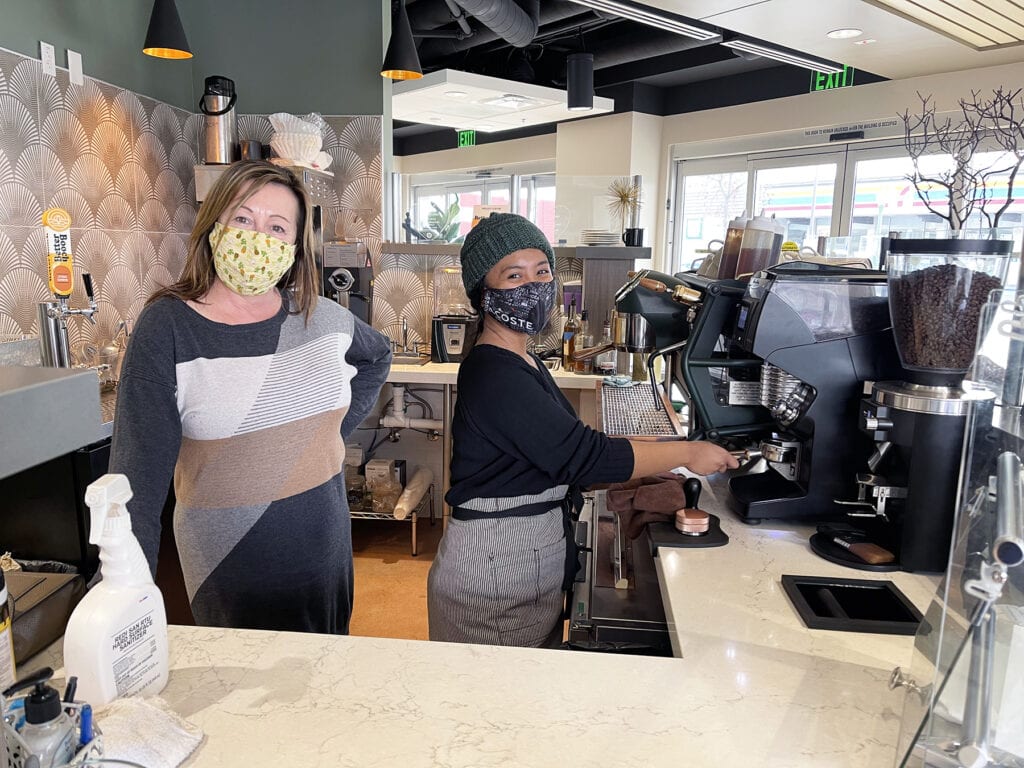 You might call the story of the Manzanita Roasting Co. a romance. Girl from San Diego wine growing family meets chef/ sommelier from Canada. They fall in love; together they start a high-end coffee roasting company. And, of course, brew happily ever after.

The company is owned by Samantha and Weston Nawrocki and operates at the floor level of The Grand, the newly renovated former Ritz Theater at 301 E. Grand Ave. It is not connected to the New Vintage Church that owns the space, and is their landlord.

Samantha and Weston met on Twitter at a wine forum and never thought they would actually meet face to face. For a while they met up at cities up and down the West Coast for various culinary adventures. “I’d never had specialty coffee before,” she recalls. “I was so fascinated.” Eventually they decided to marry and open a business together: “Let’s open a coffee roaster!” they said.

It opened for business in November. Its “mothership” is at the Bernardo Winery, which is the family-owned winery that has been in Samantha’s family for four generations, since 1927.

The Escondido location is a few minutes’ walk for the Nawrockis, who live in Old Escondido.

“I love Grand Avenue,” Samantha Nawrocki told me when I dropped by their location for a cup of coffee. “For our second location I wanted to be within walking distance.”

Manzanita is a specialty craft coffee venue, where they source and roast their beans. “We do it all,” she said. “We source from little farms from the ‘Coffee Belt,’ [roughly the area of the Earth between 23.5 degrees N and 23.5 degrees S latitude] with consensual ‘direct trade.’ We source from mom and pop operations who can’t afford ‘fair trade’ or to have the ‘organic’ certification. We prefer that to the big farms.”

Such farms are “organic by design” and like a “global farmers market,” as Nawrocki calls it. She and her husband chat with these growers on a regular basis using Skype, Facetime etc.

Americans have a reputation—among Europeans certainly—for liking their coffee beans overly roasted, if not burned. And then adulterating it with lots of sugar and cream and flavorings to hide the burnt taste. Not for nothing is Starbucks referred to as “Charbucks” among coffee afficionados. Manzanita Roasting Co. offers an alternative to the Americano style of Joe. You might almost call it the anti-Starbucks.

“The American palate has grown darker and darker and has gotten used to it darker,” Nawrocki told me when we sat down and I decided to try the house blend as a cappuccino. Using sugar is one way to counteract that dark roast taste. Kind of like adding simple syrup to your cabernet—ack! At her suggestion I tried it without sweetener, to let the full flavors of the bean come through. It was quite delicious that way.

“We’re purists,” she said. “When you get a really good bean you want to keep it naturally sweet and complex. That’s where a light and medium roast comes in. That’s where the bean is happiest and at its most flavorful. You want to taste the flavor notes that come from the farm.”

If you are making a cappuccino, you don’t want to steam the milk too hot, or it will steam the sweetness out of the milk. When you do add the milk, you want that signature pattern in the latte foam to stay intact down to last drop. 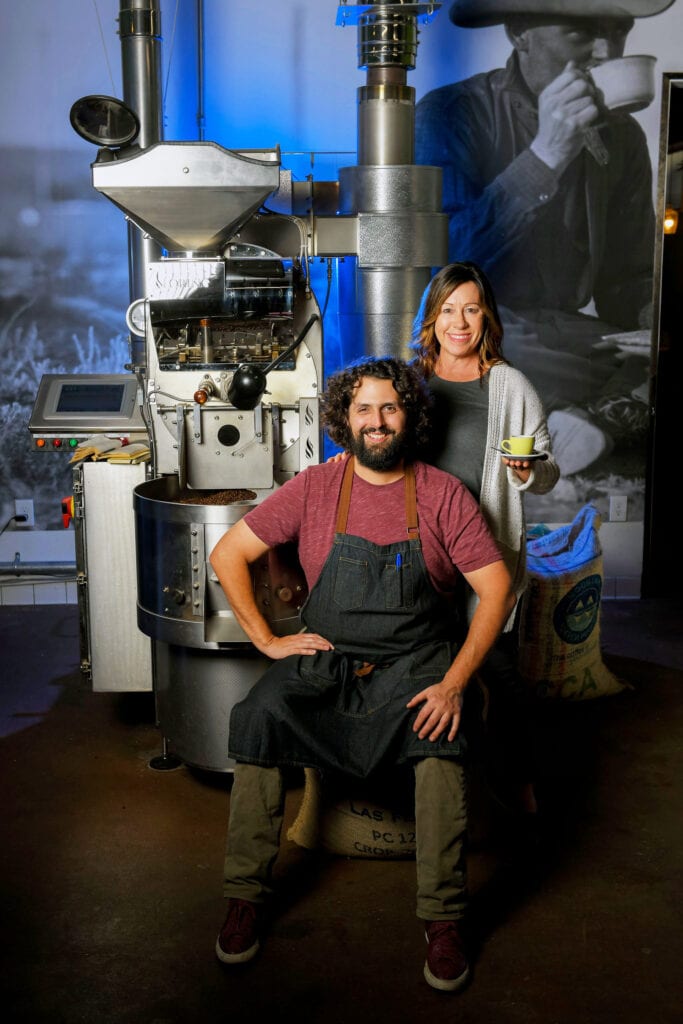 Samantha and Weston Nawrocki with their “Tesla of roasters.” “His roaster is his girlfriend,” she says with a laugh.

Weston Nawrocki brought the sensibilities of a sommelier and chef to the selection and roasting of high quality beans. They first opened a roaster in Rancho Bernardo in 2015 and only then a café. They have won several national coffee awards, including a national championship in 2019,  “competed nationally in cupping and roasting” scored 90 plus on their coffees and in 2017 was named on of Thrillist USA 21 Best Roasters in the United States. Thrillist wrote of them: “Coffee geeks love to quote statistics that coffee has more flavor compounds than wine, but rarely does that power fact sway a sommelier to trade their grapes for beans. Manzanita is one such company where a somm jumped ship and dove into the coffee world, partnering with his wife (another wine professional) to start Manzanita in North County San Diego.”

Nevertheless, says his wife, “He’s pretty humble. When they married in 2014 they decided to invest in an expensive roasting machine. The really good ones start in the six figure range.  Weston insisted on the best. The one they bought puts out zero smoke and low emissions. It is “The Tesla of coffee roasters” and is “a workhorse.” She added, “His roaster is his girlfriend!”

“We’re kind of nerdy,” she explained. “We are trying to be as good for the environment as we can.”

Weston hasn’t completely abandoned cooking, and they may eventually open a restaurant, probably in San Marcos.

They offer the coffee drinks you might expect, including drip coffee of the day, single origin pour over, espresso, Americano, cortado, cappuccino, lattes, mochas, etc. They make a point of saying, “We don’t make blended coffee drinks and make all of our drink flavors with the real ingredients.”

And yes, they have decaf, but they frown at the chemical process often used. “We only work with the Swiss Water process,” said Samantha, “because we don’t want people to put bad things in their bodies. You can drink it all day long because it doesn’t lose its flavor.”

For those who don’t want the top of the line coffee— you know, the half asleep commuter who needs a caffeine buzz as he stumbles in from the street, they offer the Mudinyereye, the one concession to dark roast lovers. “Everything else stays light to medium, in the sweet spot.”

Every time they acquire a new bean, Weston tests “until he finds the right roast time.”

The café is very popular, especially in the mornings. Manzanita Roasting Co. is very health conscious and asks customers to responsibly socially distance—so often the line winds out the door and onto the sidewalk. 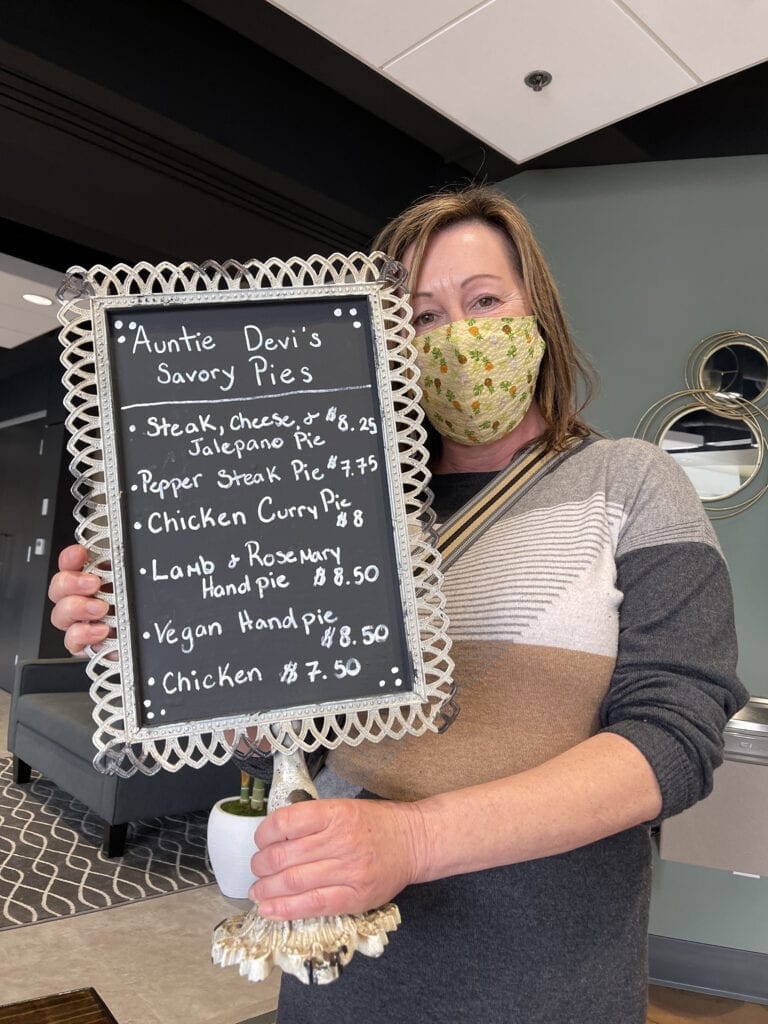 The most popular blend is the house blend, the “El Gaucho” about which their website says: “El Gaucho, there’s nothing subtle about it, just rich chocolatey deliciousness in a cup. It’s a blend of three beans, Guatemala, Ethiopia and Colombian and it’s ready for anything. Espresso, Drip or Cold Brew Bring it On.”

They carry plenty of things to enjoy with your cup of coffee, including pastries from “Over the Moon,” Bread & Cie,” Ti’s Kitchen,” which bakes gluten free, and Aunt Devi’s Savory Pies, which include Steak, Cheese and Jalapeno Pie, Pepper Steak Pie, Chicken Curry Pie, Lamb & Rosemary Pie, Vegan Hand Pie and Chicken Pie. The more popular run out quickly in between deliveries, which happen on Tuesdays.

They also have breakfast sandwiches, such as the Egg, White Cheddar and Bacon on Sourdough English Muffin and the  Egg, Cheddar and Veggie Sausage on Sourdough English Muffin. They also have Avocado Toast with Pickled Onions and Microgreens on Levain Bread and the Fyord Lox with Caper Dill Cream Cheese and Microgreens on Levain Bread.  I tried the latter and it was an easy-on-the-go version of Lox & Bagels, but with a slightly different flair. Very tasty!

Manzanita Roasting Co. presents a very welcoming, very open face to the world. It’s easy to just wander in. “We don’t take ourselves that seriously,” she says. “But we take our roasting very seriously.”

To find out more, visit their website, Manzanitaroast.com—which you can also use to order your food or coffee ahead—email them at info@manzanitaroast.com or call 858-376-7335.

One thing we can be sure ofHawthorne Country Store celebrates Chicktopia with peep showForgotten Barrel Winery: Ready when things reopen