‘The Man Who Came to Dinner’ coming to Welk’s 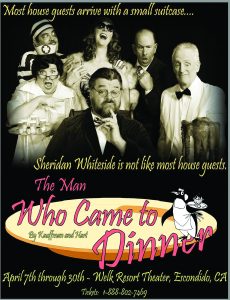 Premier Productions is presenting Randall Hckman as Sheridan Whiteside in the classic Kaufman and Hart comedy, “The Man Who Came to Dinner.” The play will be performed at Welk Resort Theater April 7-30.

The play is set in the small town of Mesalia, Ohio in the weeks leading to Christmas in the late 1930s. The exposition reveals that the famously outlandish New York City radio wit Sheridan Whiteside (“Sherry” to his friends) is invited to dine at the house of the well-to-do factory owner Ernest W. Stanley and his family.

But before Whiteside can enter the house, he slips on a patch of ice outside the Stanleys’ front door and injures his hip. Confined to the Stanleys’ home, Whiteside is looked after by several professionals: Dr. Bradley, the absent-minded town physician, Miss Preen, his frantic nurse, and Maggie Cutler, his faithful secretary.

This mad-cap comedy stars San Diego theater veteran, Randall Hickman as the irrepressible Sheridan Whiteside. Tickets may be ordered by calling the box office at 1-888-802-7469.