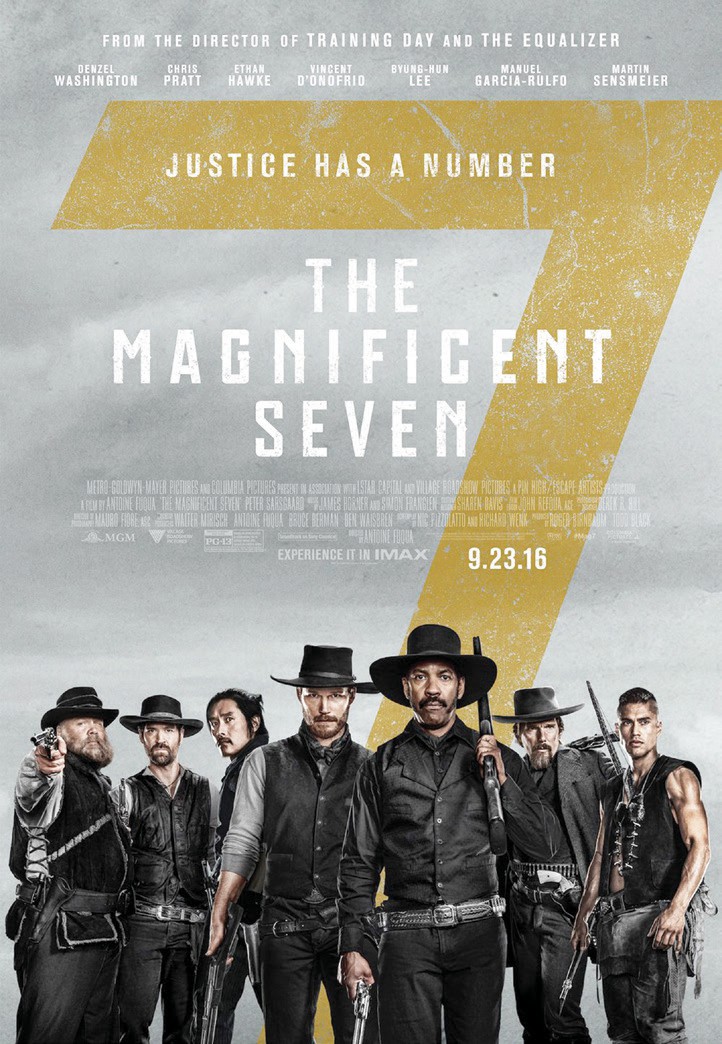 The new version of “The Magnificent Seven” (a remake of a 1960 Western that I have not seen, itself a remake of Akira Kurosawa’s “The Seven Samurai,” which I have) is one of those movies that starts off looking award-worthy, but gradually loses steam until it’s nearly unwatchable by the end. There’s no one point where it really drops the ball, it just consistently fails to capitalize on its impressive early scenes.

Those early scenes involve evil mining tycoon Bartholomew Brogue storming into the quaint town of Rose Creek and making everyone an offer they can’t refuse: sign over their property for a measly $20 or be wiped off the face of the Earth. He murders a few outspoken townspeople to prove his point. One woman (Haley Bennett), the widow of one of the victims, decides that the town doesn’t need to placate Bogue, they need to eliminate him. She hires passing bounty hunter Sam Chisolm (Denzel Washington) to assemble a team to go to war with Bogue.

Chisolm rustles together a ragtag posse. There’s talented slacker Josh Faraday (Chris Pratt), war hero Goodnight Robicheaux (Ethan Hawke), knife-favorer Billy Rocks (Byung-hun Lee), persuadable criminal Vasquez (Manuel Garcia-Rulfo), Comanche outcast Red Harvest (Martin Sensmeier), and legendary tracker Jack Horne (Vincent D’Onofrio). Together, the Seven of them can do Magnificent things, like wipe out the Bogue henchmen keeping an eye on Rose Creek. They let one go tell Bogue, so in a few days he and an army of underlings can lay siege to the town.

I have to question this strategy. Why let Bogue know that the town is going to fight back? Why not wait for him to come on his own with minimal security? Or attack him at his house or somewhere en route? One Bogue henchman suggests that the Seven only did so well initially because they had the element of surprise. Why not save that element of surprise for Bogue? Because it wouldn’t allow for an appetite-whetting ac- tion sequence in the middle of the movie, that’s why.

Actually, the mid-movie action sequence is better than the grand finale. It’s the first time we get to see the Seven in action as a unit, we don’t know quite what to expect, and the surprises and spontaneity do make it more exciting. The Seven have good chemistry, whether they’re fighting, preparing, or just sitting around eating dinner. All of these characters have to potential to be interesting, but the movie reduces most of them to interchangeable honorable fighters who are good with occasional wisecracks. The only two who get any real development are Washington and Hawke, and their arcs are entirely predictable.

Eventually we do get to that big final action sequence and it’s a total mess. It’s impossible to tell Bogue’s men and armed townspeople apart, so I constantly found myself asking “That guy who just got shot, good guy or bad guy?” Bogue has a “secret weapon” that he should be using much earlier in the battle if not straight-up from the outset. Bad guys in the middle of a shootout decide to gloat instead of getting the job done, which of course leads to the good guys making a comeback. At least one death scene is ridiculously dragged out so the actor can ham it up. Worst of all is that faceless, uninteresting characters spend so much time shooting at each other that it just gets boring.

There are good things about “That Magnificent Seven.” The settings are beautiful, with majestic sun-scorched mountains everywhere. The banter and jokes are funny and the characters seem rich and riveting when we first meet them. But the film does hardly anything to flesh them out once they’re introduced, and we care about them less and less as it goes along. These Seven heroes may be “Magnificent,” but their movie sure isn’t.

“The Magnificent Seven” is rated PG-13 for extended and intense sequences of Western violence, and for historical smoking, some language and suggestive material. Its running time is 132 minutes.