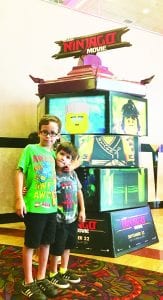 Are you a Legoland season pass holder? Then perhaps you were invited to the pre-screening of “The Lego Ninjago Movie.” At 6 p.m. on the night of the special showing, families lined up at Edwards Stadium 18 in San Marcos. Children frolicked around their parents as they waited for the movie, scheduled to begin at 7 p.m. Kids could be heard complimenting each other on their Lego T-shirts. There was a sense of camaraderie amongst families with strangers striking up conversations about their visits to Legoland.

The Lego franchise has evolved with the times by delivering products relevant to the present. By reintroducing characters from the past, they’ve created a way to connect the kids with their parents. Through video games, they’ve repurposed the simple Lego blocks. With app driven robotic toys, they’ve embraced education. Like the blocks, Lego has built a brand which helps to bring families together.

The warmth and wit of martial arts actor Jackie Chan helps set the tone for the movie. Teenaged Master Builder Lloyd, aka the Green Ninja plots to save the city of Ninjago from the villainous Garmadon. Under the guidance of Master Wu, Lloyd and his five friends embark upon an adventure which leads to self-discovery. Their newfound power encourages them to reclaim the peace of Ninjago.

The tension between Lloyd and his father Garmadon is both humorous and realistic. Their relationship suggests the importance of parenting and forgiveness. The movie also spotlights the significance of embracing the acceptance of individuality. The Lego blocks themselves became symbolic of the building blocks of life.

Throughout the movie, we are reminded of the infinite ways in which Legos can unlock creativity. The vividly colorful imaginative spaceships, characters and structures transported you into an inspirational world. The humor of the movie had attendees laughing with each other. Feline lovers alone would enjoy the movie for obvious reasons. If I were a movie critic, ten stars wouldn’t be enough. Therefore, I have to refer to Nigel Tufnel’s amplifier because this movie goes to eleven.