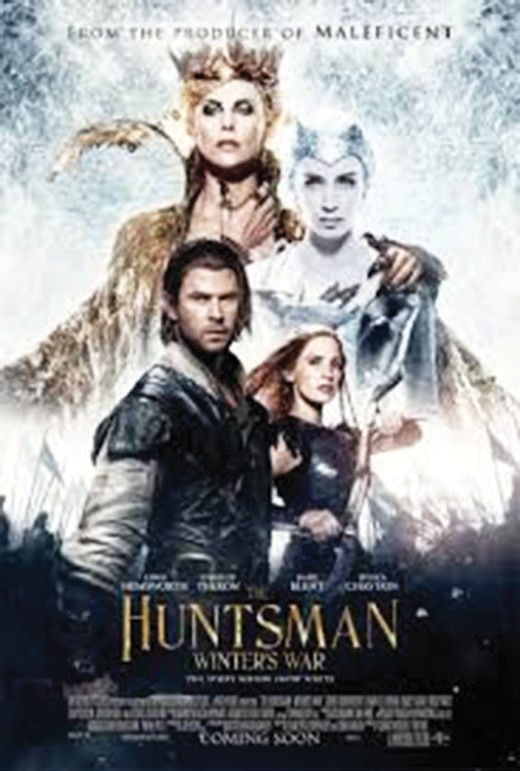 When I see an unnecessary sequel, I’ll often wonder what the studio was thinking. I’m not talking about the huge franchises where any kind of new installment is basically a license to print money. I’m talking about unwanted se­quels to movies that don’t have a fan base clamoring for more. Obviously I can think of a few motivating factors – greed mixed with a lack of imagination – but what makes studios think that they have a franchise on their hands when the first movie wasn’t exactly a franchise-launcher? In the case of “The Huntsman: Win­ter’s War,” I actually don’t have this question. I know ex­actly what they were thinking.

2012’s “Snow White and the Huntsman” had decent box office ($155 million do­mestic), mostly because of the Snow White name, but it wasn’t a very well-liked mov­ie. The consensus seemed to be that Charlize Theron was great as the villainous Queen Ravenna, Chris Hemsworth was barely passable as Eric the Huntsman, and Kristen Stewart was awful as Snow White. There was a lot of neg­ativity attached to Stewart be­cause of her association with the oft-maligned “Twilight” franchise and gossip about her having an affair with the film’s married director. “The Huntsman: Winter’s War” makes the conscious decision to keep Hemsworth and Ther­on, but remove Stewart from the equation to see if the fran­chise can succeed without its biggest albatross. Of course, it’s also losing the Snow White name, but it has a plan to pull people in with some­thing possibly even more ap­pealing.

The new film serves as both prequel and sequel. We see Eric grow up in the king­dom of ice queen Freya (Em­ily Blunt), sister of Queen Ravenna. Love is forbidden in Freya’s kingdom (because she has an icy heart, natural­ly), but Eric can’t help falling in love with his fellow soldier Sara (Jessica Chastain). Freya catches the couple, and Eric sees Freya have Sara killed before he himself is left for dead. But of course he sur­vives to participate in “Snow White and the Huntsman.” A new conflict arises when the evil Magic Mirror goes missing from the conspicu­ously absent Snow White’s kingdom. Whoever gets their hands on the mirror can take over any kingdom they want, including Snow White’s. Eric is tasked with retrieving the mirror, and he gets help from an old flame, but guess who tries to freeze that flame away. Also, the mirror is personified by Ravenna, power-hungry as ever.

As an action-adventure movie, the film is dull. There’s one memorable finish to a fight with a horned op­ponent and the rest is all stan­dard swords, sticks, arrows, and fire. The blows are rarely impactful and the subpar spe­cial effects don’t help. Where the movie succeeds is as a ro­mantic comedy. Hemsworth and Chastain have really good flirtatious chemistry and it’s a shame Chastain hasn’t been used more in the film’s advertising. Also fun are Eric’s dwarf sidekicks (Rob Brydon and Nick Frost). Eventually the band adds two fe­male dwarfs (Sheridan Smith and Alexan­dra Roach) and they make for two more cute couples whose bickering makes the film funnier than it has any right to be.

The equation for “The Huntsman: Winter’s War” is “Snow White and the Huntsman” – Kristen Stewart + Jes­sica Chastain + Emily Blunt and a lot of “Frozen”-style imagery. On paper, it’s a winning formula. In practice, it’s just okay. The movie doesn’t succeed with the things that it’s pushing (the action, the ice, the disappointingly bland villains), but it does succeed with some of the things it’s holding back (Chastain, the dwarfs, the humor in general). I’d advise you to go into this movie expecting to laugh. Maybe you can laugh at things that are supposed to be funny, maybe you can laugh at the things that aren’t (I think Hemsworth is going for a Scottish accent, but Crikey, he’s not pulling it off). Just don’t go in expecting to be thrilled, or you’ll be left in the cold.

“The Huntsman: Winter’s War” is rated PG-13 for fantasy action violence and some sensuality. Its running time is 114 minutes. Contact Bob Garver at rrg251@nyu.edu.