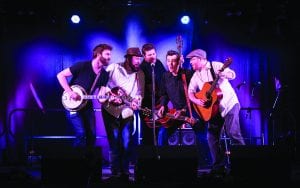 The Hellbenders in action.

Bluegrass powerhouse super group, the HillBenders, bring their raucous take on a classic to the stage when they present Tommy: A Bluegrass Opry on January 21 at the California Center for the Arts, Escondido.

When you think Pete Townsend or Keith Moon, the words “bluegrass” and “banjo” don’t really come to mind, but that’s just what award-winning bluegrass maestros The HillBenders aim to fix.

Back in 2015, The HillBenders alongside producer Louis Jay Meyers, had a dream to cover The Who’s classic rock opera using a guitar, mandolin, banjo, upright bass, and dobro. What followed was an album RollingStone called one of the thirty best country albums of 2015 describing it “as awesome as it is audacious, a fully satisfying album.”

Bursting into the public eye on season seven of the hit show America’s Got Talent, the HillBenders have taken bluegrass by storm. They’ve won several competitions including the Telluride Bluegrass Band Competition and the National Single Microphone Championships. Their infectious hooks, rock sensibilities, and genuine love for classic bluegrass, make their live shows a spectacle that can’t be missed.

Using just a banjo, mandolin, guitar, upright bass, and dobro, the HillBenders have been able to push the boundaries of the classic Americana sound into a new millennium of fans.