“The Grand” is alive again 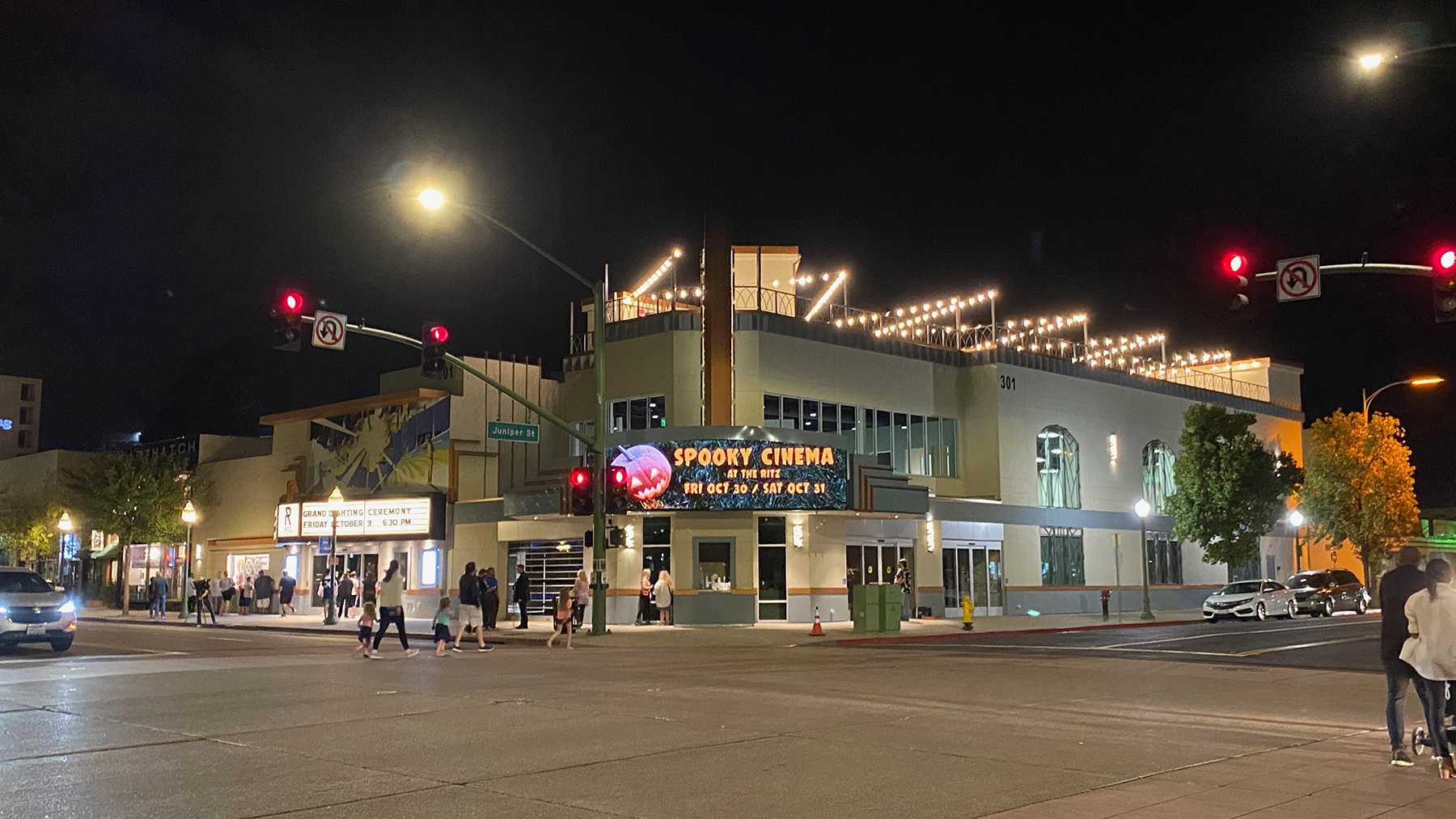 A grand view of “The Grand” just after the lights were turned on Friday that shows its changeable marquee and the rooftop lounge.

A couple of years ago Pastor Tim Spivey of the New Vintage Church speaking at the groundbreaking of The Grand said he hoped the restored Ritz Theater was “defibrillated to once again pulsate with life.”

“The Grand” will be, of course, a church. But it will also be a gathering place for Grand Avenue’s rich cultural life and will eventually host films.

Friday night it looked like that heart was pumping with health and vigor and that it might just help spark a renaissance of Grand Avenue as a crowd of about 300 gathered at the corner of Juniper & Grand at the Garden Gazebo to celebrate.

Spivey spoke again Friday night. He talked about some of the features that are visible in the new building, such as the display case, which contains all original items for the theater. Such as old film reels, parts of the original seats and motors from the old projector.

Above the marquee is the mural that the city requested the church hire artists to paint. “We wanted to make a contribution to the art scene,” said Spivey.  So they hired storyboard artist Chandler Wood and contemporary American artist and actor Darren Le Gallo, who is, incidentally, the husband of actress Amy Adams. Together they painted a mural employing the theater’s art deco theme.

Inside “The Grand” are more that 500 seats, “and one of the best sound systems you will find anywhere,” said Spivey. “We also have a very large movie screen and a stage.” The building has 477 seats on the bottom, 100 in the mezzanine.

One unique feature is the rooftop lounge where visitors will be able to gather as groups—with food and drink service provided. This space can be rented for companies and used for rooftop cinema. “We’re going to do church services up there,” said Pastor Spivey. He continued, “On the second floor we have a black box theater. On the bottom will be the Manzanita Roasting Company, an elite coffee house, owned by a local family.”

Spivey urged the crowd, “We want you to come, drink your coffee, see your movies, go to church. We hope you will avail yourself.”

The pastor called the members of New Vintage Church, “America’s most flexible church. They have been bounced around. Thank you for being willing to take this journey. You could have made this a miserable space for everyone. Instead you made it awesome!”

Spivey recalled when he first presented the vision for The Grand before the city council five years ago. “My goal was that five years from now people would say that’s the best thing that ever happened on Grand Avenue,” he said, and added, “Consider yourself invited indefinitely.”

The theater will start showing films the Halloween weekend. Soon the Manzanita Roasting Company will move in.

The church held its first meeting on Sunday after the grand opening. “We’re test driving this thing,” Spivey told the crowd.

At 7:05 the lights of The Grand came on to a large cheer from the crowd.

Mayor Paul McNamara declared, “This is really one of the greatest things, one of the most innovative things I have seen in my entire life.” He continued “This group, under the leadership of Pastor Tim has taken an iconic building of Escondido and repurposed it and at the same time saved it. I think people from around the country are going to come here and say ‘We should do something like this.’ It’s incredible! I’m really pumped and I hope you are too!”

Photos by David Zumaya, of My San Diego North County 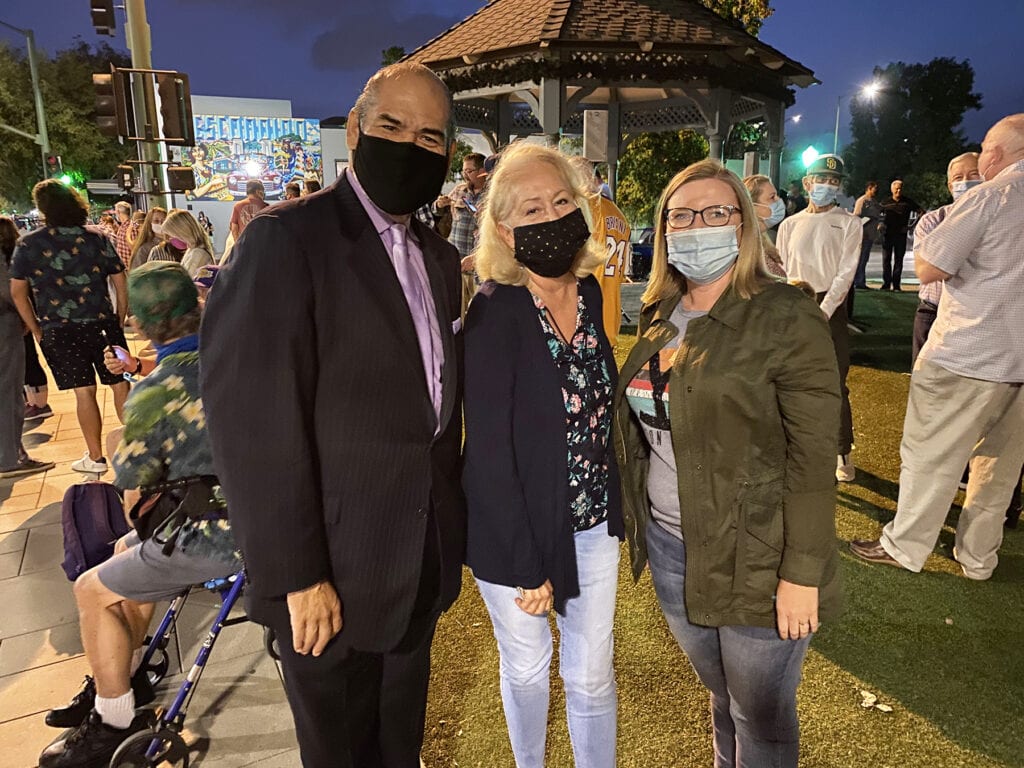 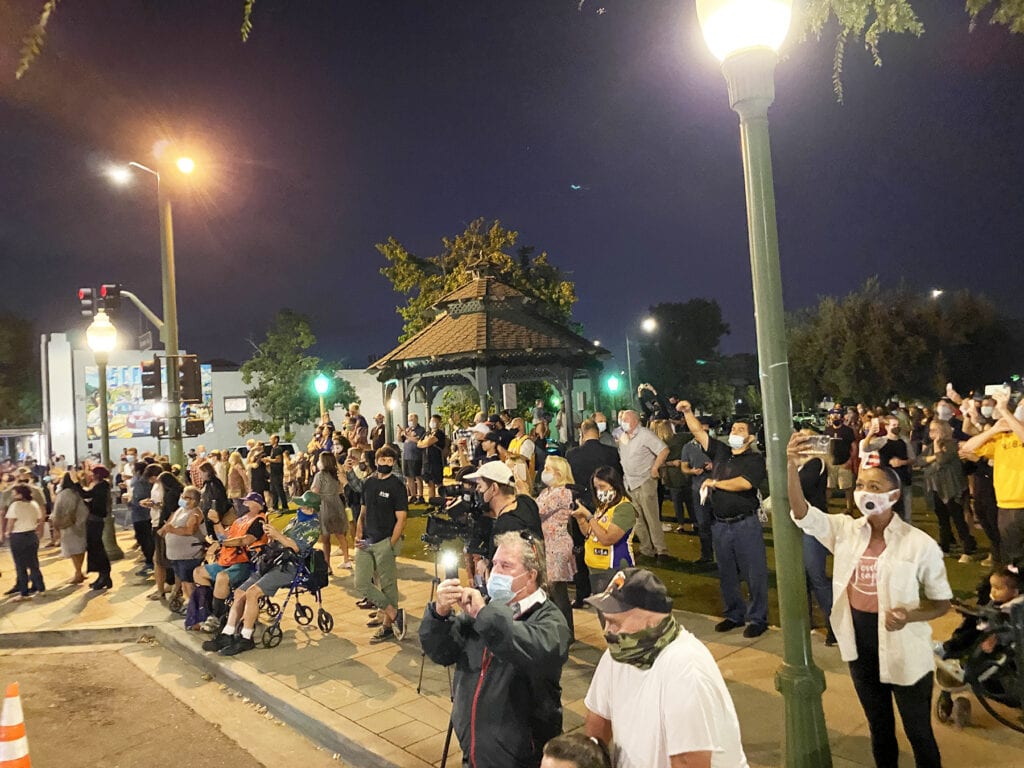 The 300 or so attendees of “The Grand” celebration Friday snapping pictures of the structure from across the street. 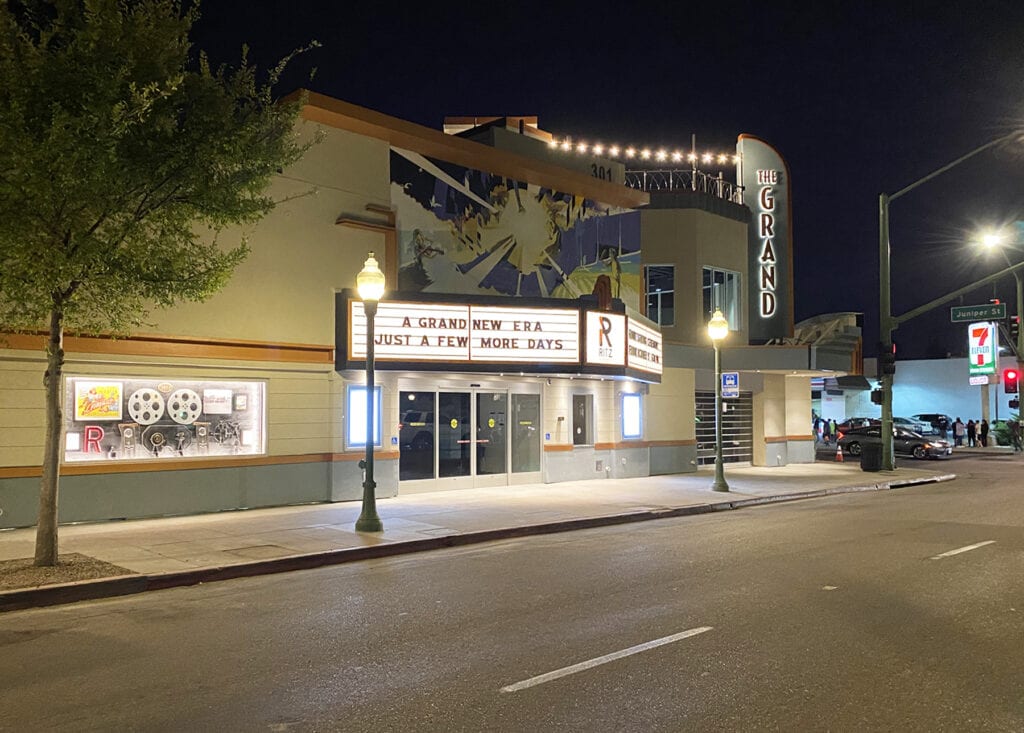 This view of “The Grand” shows the display case with memorabilia from the original Ritz theater, including old film reels and the Art Deco mural that was painted by storyboard artist Chandler Wood and contemporary American artist and actor Darren Le Gallo. 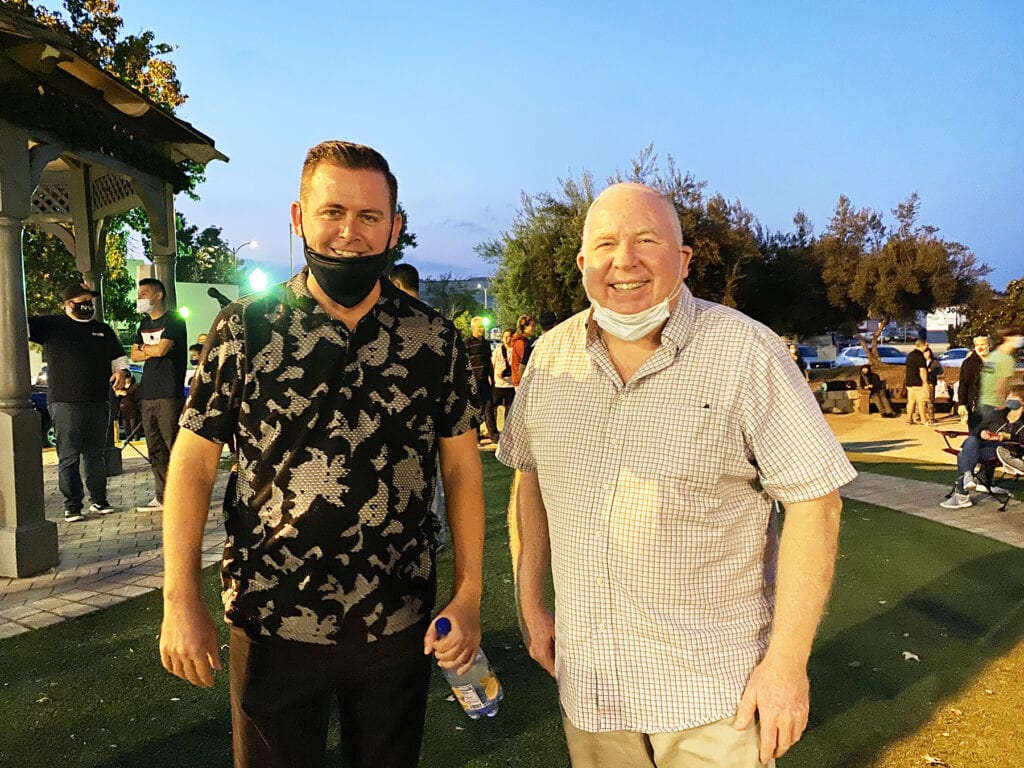 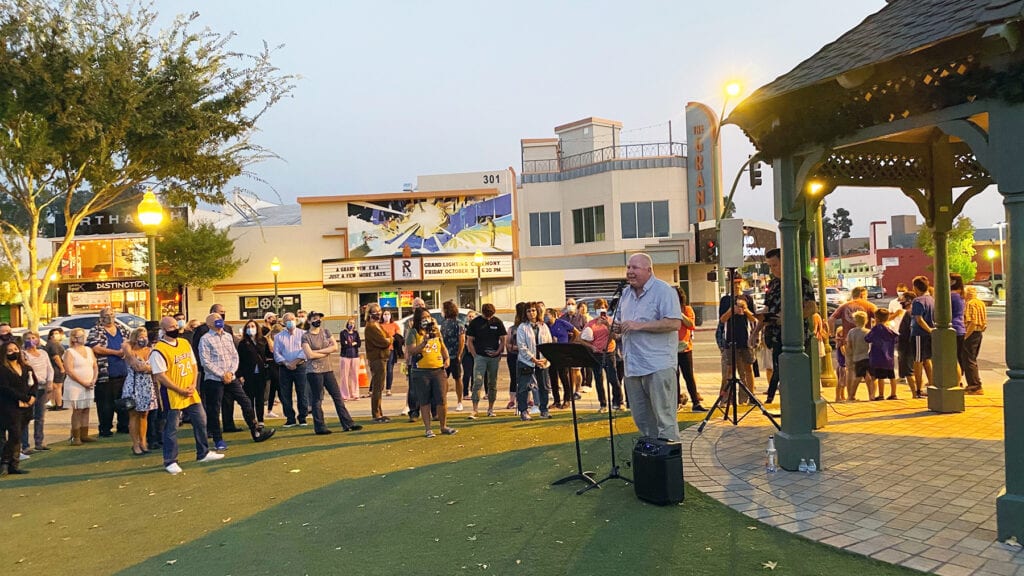 Mayor Paul McNamara speaks at the twilight gathering just before the lights were turned on at the new “The Grand,” the renovated old Ritz Theater. 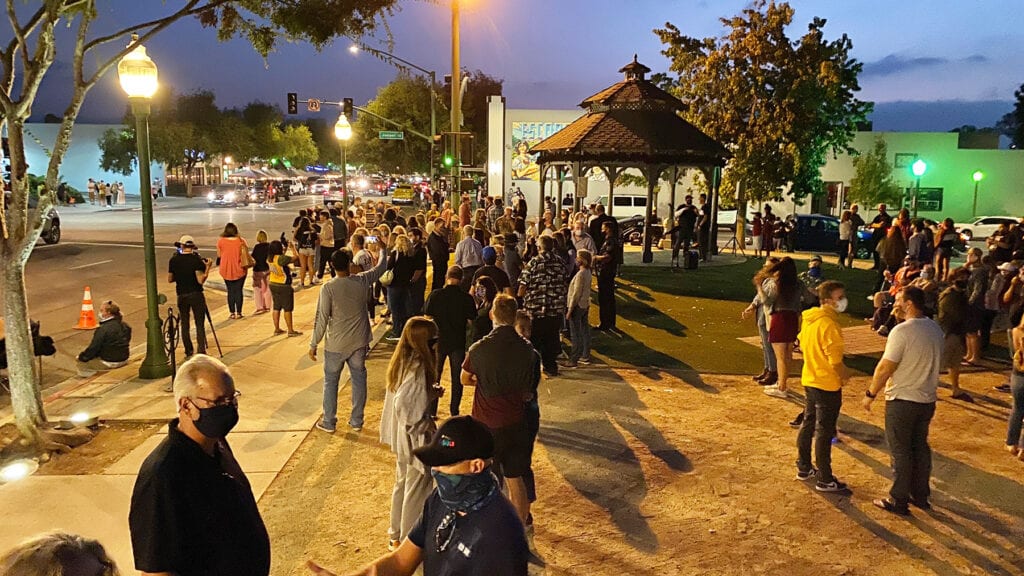 3 responses to ““The Grand” is alive again”