The eclipse: the greatest event you shouldn’t look at (with the naked eye) 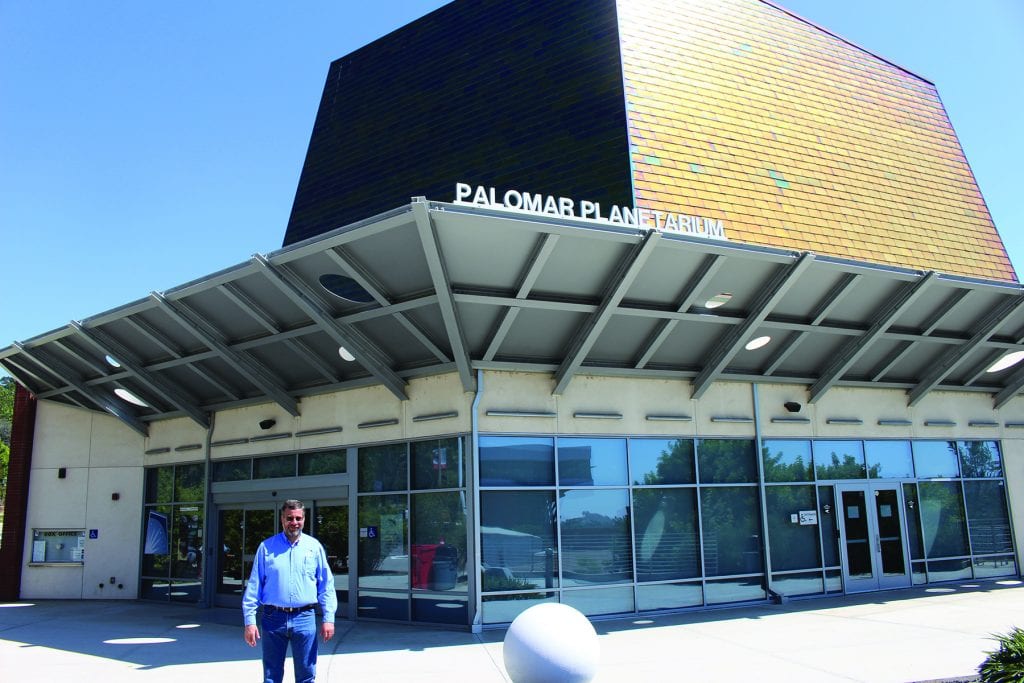 The Palomar College Planetarium at five years old is the most up to date planetarium in California.

Millions of people in North America will be making the trek north to one of the states with optimal viewing of the August 21 total solar eclipse that will take place in in the midmorning.

Just because you won’t be able to see a total eclipse here in San Diego county doesn’t mean you can’t join billions of people in watching part of this rare solar display.

We caught up with Scott Kardel, assistant astronomy professor at Palomar College, and also assistant director of the college’s planetarium. He’s planning on joining the teeming masses heading for the eclipse later this week. He kindly took out time from his day to talk about the event, and to give some good advice on the best way to view it —and to warn about what not to do, which can be boiled down to this simple maxim: do not look directly at the sun, no matter what, without proper viewing glasses. You could lose your eyesight if you do.

If you don’t have viewing glasses, which at this point are very difficult to obtain before the event, you have some choices. You can poke a pinhole in a piece of cardboard or paper and focus the image onto a piece of white paper. You will see the image of the moon taking a bite out of the sun. This, by the way, is the same principle used in cameras.

You can also build a box viewer, and once again safely see the image.

“Whatever you do, don’t look directly at the sun without protection of eclipse glasses,” said Kardel. “We all know that we shouldn’t directly look at the sun, but because during an eclipse ‘something’ is happening, we have the urge to look up. Don’t do it. You could suffer permanent damage.” 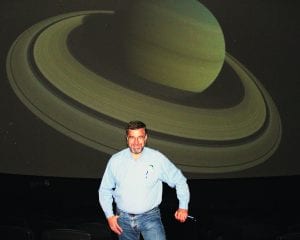 Scott Kardel in the Palomar College Planetarium, with the image of Saturn in the background.

Moreover, you won’t know you are being damaged because you won’t feel any pain.

The only time you can look at the sun during a total eclipse is when the moon completely covers the sun, and for about a minute, you can see the corona emerge in all its silvery glory.

But don’t get excited. That’s not happening here in Southern California. Better stick to the box viewer, the glasses or, as Kardel suggested, “you can even use a cheese grater or a colander” to create images.

Or position yourself under a leafy tree and watch hundreds of little images of the sun project onto the ground.

Kardel explained that optimal viewing for the eclipse will be a narrow band about 75 miles wide that will stretch across the continent and includes Oregon, Idaho, Montana, Wyoming, Nebraska, Kansas, Iowa, Missouri, Illinois, Kentucky, Tennessee, Georgia, North Carolina and South Carolina.

That band will actually be the shadow created when the new moon passes between the earth and the sun; a rare enough occurrence that until fairly recently in human history it was regarded as divine intervention, usually because Man had done something wrong.

A lunar eclipse, which happens far more often, is when the shadow of the earth is projected onto the moon, creating an eerie but beautiful orange glow.

You can encounter celestial wonders almost every Friday night at the Palomar College planetarium, which has screenings at 7 & 9 p.m. The cost is $6 with discounts for students and seniors.

If you want to watch our interview with Kardel in its entirety you can easily do so without leaving the state by visiting the Facebook page of our sister publication, The Valley Roadrunner.