“The Conjuring 2” is an OK choice 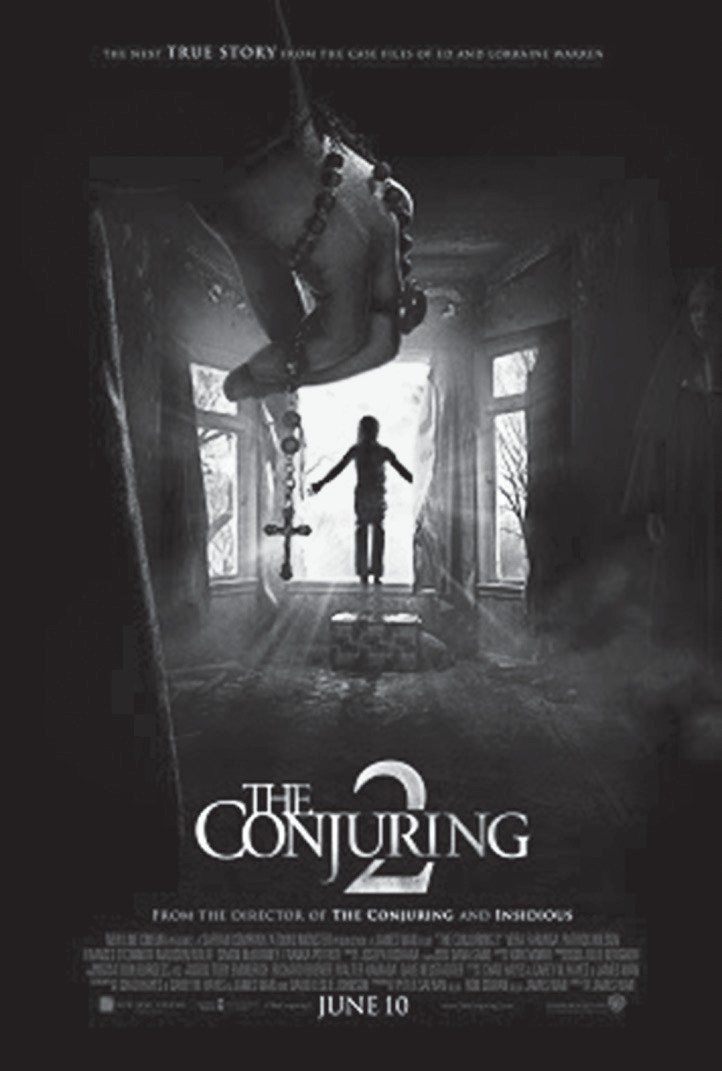 I didn’t really understand the appeal of 2013’s “The Conjuring.” Or rather, I didn’t understand the appeal of “The Conjuring” specifically. OK, that clap­ping game was nice balance of silly and scary and the possessed doll Annabelle was effective at ripping screams out of the audience’s larynx (I didn’t see her spin-off, but I heard bad things). But mostly I saw it as just another haunted house movie. “The Conjuring 2” is pretty much the same way: some cheap scares, some genuine scares, but little to make it better or even distinguishable from dozens of other horror films just like it.

We catch up with paranormal inves­tigators Ed and Lorraine Warren (Pat­rick Wilson and Vera Farmiga) as they finally investigate The Amityville Hor­ror. Lorraine takes an out-of-body trip around the house following in the kill­er’s footsteps. She shoots people with an invisible gun in this sequence, which is almost entirely responsible for the R- rating in what is otherwise a surprising­ly tame horror movie. Toward the end, she sees the cause of the massacre: a de­mon dressed up like a nun. A few days later, Ed paints a portrait of the demon nun. The nun continues to haunt Lor­raine. This is the kind of movie where you think, “Maybe get rid of the creepy portrait, Lorraine?”

Way over in England, another haunt­ing is taking place. Janet Hodgson (Madison Wolfe) was messing around with a spirit board and now strange things are happening. She’s waking up in rooms she didn’t go to sleep in. Toys and furniture are moving around on their own. Ghastly faces are appearing out of nowhere telling her to get out of the house (confession: this got an embar­rassing vocal reaction out of me). And Janet is talking in the voice of a 72-year- old man who died in her house. What’s her mother Peggy (Frances O’Connor) to do? Reach out to every paranormal investigator she can find, of course.

The Warrens show up and spend the rest of the movie contending with the possessed Janet, the old man, and the demon nun. The film does what it can to keep us guessing where they’ll pop up next. Sometimes they’ll jump into frame. Sometimes the cameras will cut away to something else, and when it cuts back, the baddies will be there. Anything to be startling, because that’s really all the film can do. The ghost and demon faces are scary for about a sec­ond, which is fine when we get them for a second at a time. But when the camera lingers on them for an extended look, it becomes clear that they’re bad CGI.

The film is based on a real-life inci­dent, though it’s probably taking a few liberties because, well, it’s a ridiculous horror movie with demons and so forth. It would be nice if there was a little more ambiguity as to who was really causing all the spooky stuff. Was Janet crazy? Faking? Nope, we see the ghosts and de­mons, it must have been them. Though the film is nice enough to stick to the ac­tual body count.

“The Conjuring 2” does some things right. There’s a creative scene where Janet transforms into the old man and back again in the course of a conversa­tion, but the camera is on Ed and she’s just a blur in the background. I like the comedy spots where kids, then adults, then “tougher” adults freak out over the strange goings-on. And yes, I’m a suck­er for some of those jump scares, even the cheap ones. If you’re in the mood for a haunted house movie where things go bump in the night, “The Conjuring 2” is an OK choice, just not an outstanding one.

“The Conjuring 2” is rated R for ter­ror and horror violence. Its running time is 134 minutes. Contact Bob Garver at rrg251@nyu.edu.