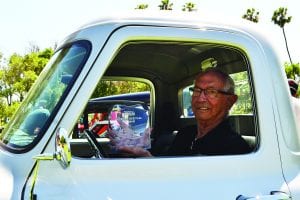 Harold Meziere shows off his Best of Show trophy.

The show raised funds for the Escondido History Center. 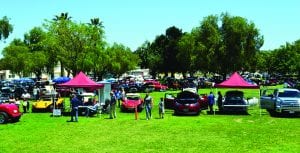 The car show spread over a good portion of Grape Day Park.

Stacey Ellison, executive director of the history center gave credit where credit was due: “Karl Strauss and the Sunrise Rotary hosted our beer and wine garden! Big thank you to them. BIG thank you to:Toyota of Escondido (Signature Sponsor), Ford of Escondido, Chrysler Powell, and Finishmaster were our sponsors.”

This year’s honoree was Bruce Meyers of Meyers Manx.

Bruce Meyers, a Valley Center resident, is the creator of the “Meyers Manx” a little recreational vehicle that has been delighting car lovers since 1964. His is the story of how innovation married art. You might know it better as the dune buggy: a fiberglass body matched to a VW Beetle frame. 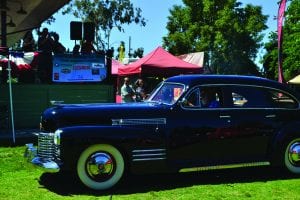 The winner of the People’s Choice Award was 1941, Cadillac: Tom & Pat Hamlin. Photos courtesy of the Escondido History Center.

Meyers is a natural artist. He attended art school in Los Angeles and Chicago where he excelled at drawing life figures. Later, he made a living building fiberglass boats, tools, and then cars. An artist with the mind of an engineer, Meyers married his love for art, the beach, and cars by creating the Manx fiberglass body.

This exciting little car is synonymous with the 60s. Even if you knew nothing about off-road vehicles, you would recognize the dune buggy. The Manx just emanates “FUN!”

It wasn’t until he was in his mid to late 30s, after working in boat design and even serving in the Navy during WWII, that Meyers developed the Manx.

He modeled, engineered, created the molds, and manufactured the Manx. He knew instinctively that he had something special and applied for a patent. That might have been the catalyst of an epic story crowned by an exploding interest in off-road recreational vehicles, but sometimes fate has a funny way of playing with a foregone conclusion.

Meyers’s patent was challenged in court. His patent for the Manx body was denied and overnight, manufacturers began pumping out cheap reproductions of his design. 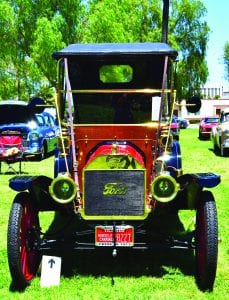 A 1911 Ford Model T, one of the prized exhibits at the annual car show.

For many years, the sight of these copycats aggravated, Meyers. Each new product infringing on his design felt like a little death. Then, in 1994, he was invited to Paris, France, to celebrate the 30th anniversary of the dune buggy.

Meyers was asked to lead a parade of several hundred copies, but the thought turned his stomach. Jackie Morrel, who had asked Bruce to attend, looked him in the eye and said something that changed his outlook. He asked him  to look into the faces of the many people his design had brought joy to. He reminded Meyers that he was rich with love because he had given recreational vehicle lovers something that was unique and beautiful. He was finally able to make peace with this part of his past.

Bruce Meyers’s career has been punctuated by a number of highs and lows. For instance, in 1967, he and his crew set the record for Baja racing. In 2017, on the 50th anniversary of the NORRA Mexican 1000, Meyers was invited to Baja to celebrate that momentous event. 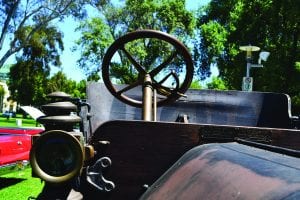 The Most Unique award went to the 1909 EMF Touring Car, owned by Mac MacPherson.

Nowadays, Bruce Meyers builds a new line of custom Meyers Manx bodies for clients. His office is littered with memorabilia reflecting his decades in the business of fun. Magazine covers, photographs, model cars, posters, and so much more depict the iconic buggy Bruce Meyers gave to the world. Visit Meyer’s Manx at meyersmanx.com/