“Anne of Green Gables” In Escondido 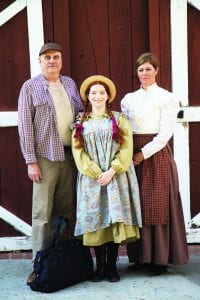 Some members of the cast of “Anne of Green Gables.”

What a great combination; early 20th century classic story and an evening enjoying an authentic English Tea.  That’s what you will have when you see The Project 413 production of “Anne of Green Gables,” at the Grand Avenue Tea Room.

A mixture of young and experienced regional theater talent bring to life L.M. Maude’s timeless story. Set in early the early 1900’s, “Anne of Green Gables” is about an older brother and sister Mathew and Marilla Cuthbert (Jim Clevenger and Renee Grandola) who send away to the “asylum” (known as an orphanage today) for a “ young boy” to help with chores on the Edward Island estate of “Green Gables”.   However, something went amiss in the communication. To Matthew’s surprise and Marilla’s open chagrin, the young boy turns out to an 11-year old Anne Shirley (Anna Bahen), from Nova Scotia. Anne is red haired, pale skinned, but very sober about her appearance, “Now you see why I can’t be perfectly happy!  I can’t imagine that red hair away. It will be my lifelong sorrow.”

While Murrilla insists that Anne should be sent back because “she will be of no good to help out with the chores.”  However, Matthew sees Anne’s great qualities and retorts, that Anne’s staying, “might be good for her.”

So sets the stage for the story to unfold about this young, imaginative, loquacious, opinionated, brash, but brilliant orphan girl who slowly wins the heart of her new town and makes life-long friends with her caring, love and loyalty. In the end, when a heart-attack takes Mathew, Anne gives up a college scholarship to devote her life to the town that adopted her to the very woman, Murrilla, who wanted to send he back to the orphanage.

Through series of quick vignettes, Director Katie Burlington (North County native and community theater veteran) with the able Dramaturgy assistance of Chelsea Robinson, takes us masterfully deeper into the story, entertained throughout by the very talented and comedic 16 year-old Anna Bahen.  Jim Clevenger (Mathew) is believable as the steadfast Mathew who continues to see the good things about Anne, despite the on-going doubt of his sister Marilla.  Stirring the plot is the town busy body, Rachel Lynde (Heidi Bridges) who declares that Anne “talks entirely too much for a little child.”  In the second act, the story closes with several scenes centered on Mathew’s declining health and then dramatic death. The play closes with the very touching scene where Anne comforts Marilla with the news that she will not go off to college and will stay with Marilla and teach locally.  Touched by Anne’s love and loyalty, Marilla finally opens her heart to the little red-headed girl she had openly rejected years earlier.  This was definitely tissue time.

The Grand Ave Tea Room (145 West Grand Ave., Escondido) is the perfect venue for a play set in the early 20th Century Canada. It is an intimate setting, with the play unfolding within a very few feet of you while you enjoy an authentic English Tea.

“Anne of Green Gables” runs through Sunday, September 24, with performances on Thursday, Friday and Saturday evenings, a Sunday matinee and early evening performance. The price of admission includes not only the wonderful performance but also the delicious English Tea.

For performance information and tickets, contact the Grand Ave Tea Room at 760-233-9500. Seating is limited so get your tickets early.

One response to “The 413 Project at the Grand Ave. Tea Room…”