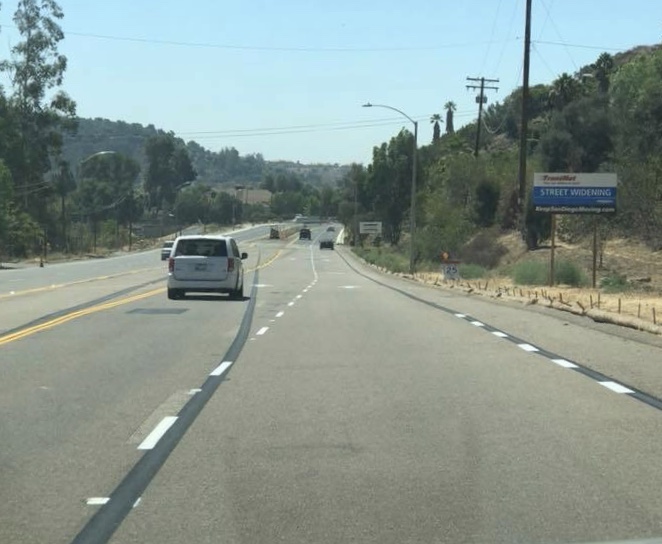 Road hell just came to an end for the thousands of people who use East Valley Parkway at the bottom of the Valley Center Grade on a daily basis—and especially for those who like to visit the casinos in Valley Center or Bates Nut Farm on the weekend.

Friday morning all four lanes of the E. Valley Parkway improvement were opened to traffic by the City of Escondido, which first started work on the project about a year ago.

And for the first weekend it was as if a forearm had been suddenly removed from our collective transportation windpipe and we could inhale giant big gulps of freedom to move! That noise you hear is the barbaric, joyful yawp of relief from motorists.

Julie Procopio, the city engineer, told The Times-Advocate Friday morning, “It’s open now. We have two lanes in each direction that will be available during non-working hours, on weekends and after 4 p.m. on weekdays.”

She added, “We will keep the two lanes open to the extent possible even during working hours. So if they have work that doesn’t, they will keep. This will make commutes helpful, particularly with afternoon peak hours. And it will help on the weekends, and we know in late September and October we have traffic up to Bates Nut Farm. Our goal was to get thee lanes open to alleviate that situation. We are excited to be able to do that.”

Procopio added that it was good that the full year of traffic gridlock created by the widening “hadn’t been for nothing. Obviously, this one year -period will allow us to experience alleviated traffic for year and years to come. A little bit of pain for extended good.”

She said the contractor has about ten weeks of work left. “The majority is landscaping and a good portion can be done without any lane closures. Over the next six to eight weeks they will be finishing striping, paving, and the median as well.”

The city engineer added, “You’ll notice that a portion of the median has not been completed. That needs to be planted. Once that is complete they will put the entire paving over the entire street and stripe it. After that it’s just landscaping.”

The project has stayed within its approximate $9 million budget, which includes $6.9 million for actual construction and the remainder from right of way acquisition and design. The Rincon tribe contributed $800,000 of the cost.  “We’re grateful for that,” said Procopio. “It fully funded the project.”

Asked if they encountered anything unexpected, Procopio said, “You expect the unexpected. Rarely do you go through a project without it. On this project we did encounter a few underground utility conflicts on a couple of storm drains systems that needed to be redesigned.”

Just because the project is ALMOST complete, doesn’t mean it is complete, and motorists need to remember that for their safety and the safety of the workers they need to drive slowly through the construction zones.

“We’d like to encourage folks to drive slowly through the construction zone,” said Procopio. “We still do have construction workers out there. Observe the reduced speed limit so we can keep everybody safe.”