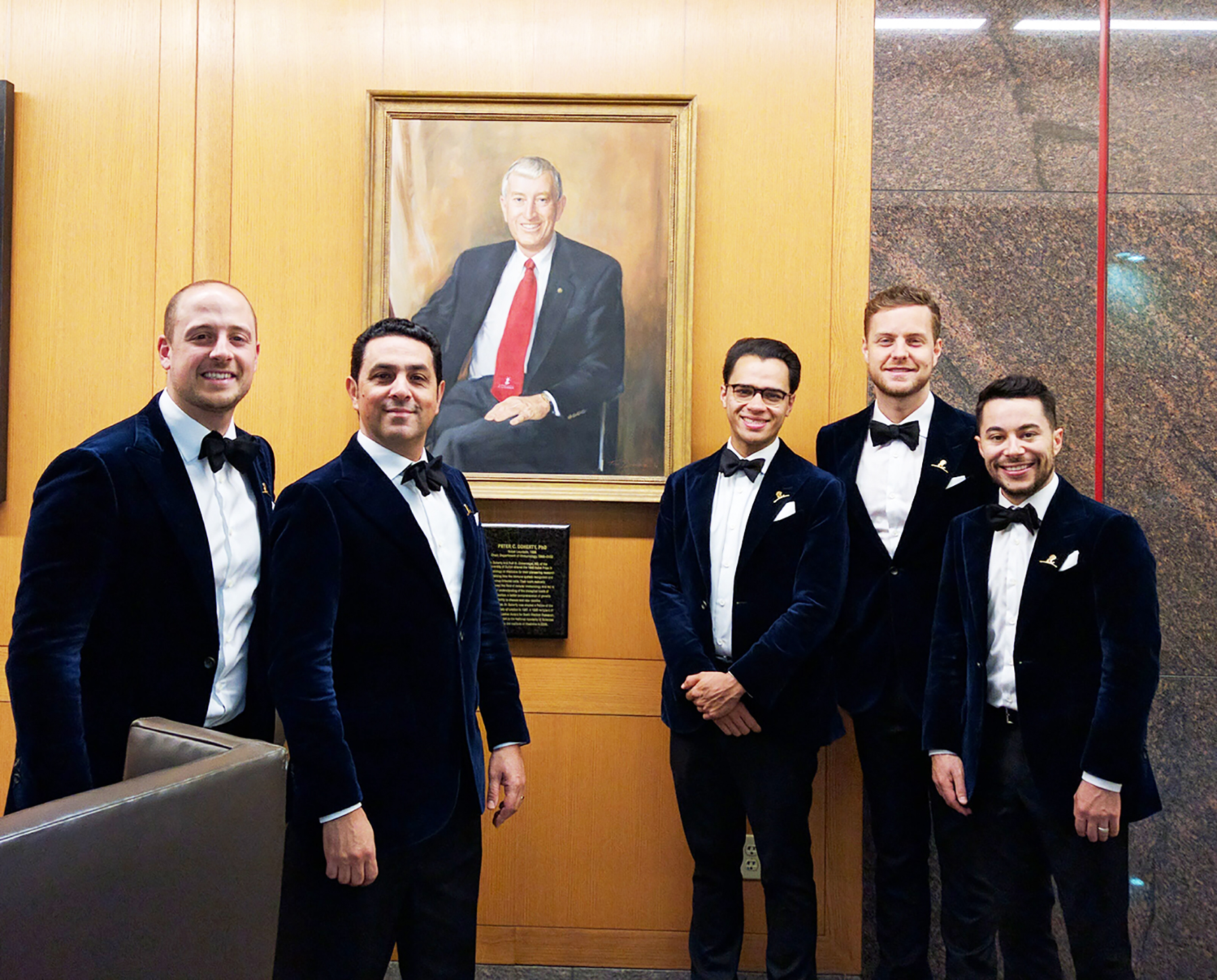 Some of the Ten Tenors standing before the photo of famed Australian St. Jude doctor and Nobel laureate Peter Doherty. St Jude Children’s Research Hospital is the beneficiary of the group’s U.S. tour this year.

The Ten Tenors, Australian vocalists who have backgrounds in Opera, Pop and Rock, will be performing music from their hit album “Home for the Holidays” at the California Center for the Arts, Escondido’s Center Concert Hall on Friday, November 30 at 7:30 p.m.  The appearance is part of a 38-location tour.

They will perform such traditional and contemporary favorites as “Joy to World,” “Sleigh Ride,” “White Christmas,” and many more.  Tickets start at $35.

All the net proceeds from their album will benefit St Jude Children’s Research Hospital.

I interviewed Michael Edwards, one of the Ten Tenors, who talked about the group’s tour of the U.S. and their returning engagement at the Center. Edwards calls the center a “very interesting venue that is remarkable for its versatility and that it can be configured in many different ways.” Earlier this year they performed “Wish you were here,” at the Center.

Edwards said, “We try to appeal to as many people as we can. One thing we try to do is celebrate all aspects of the tenor voice, rather than just opera. We are high energy. We want to have a great time. Expect the unexpected with our shows.  There will, of course, be lots of Christmas music. We love Queen so that will be in there for sure.”

Edwards talked about how the group came to want to raise funds for St. Jude’s.  “When we launched the album in Australia, we wanted to do something special,” he said. “We partnered with Children’s Hospital Foundation in Brisbane. Then, when we were touring the U.S. in 2016, we wanted to do the same thing but for a local level.”

They found St. Jude. “We are really proud to associate and align with them,” said Edwards. “I think it’s a really worthy cause. We were affected by visiting the hospital itself. One of the things that resonated was that while sad things happen at St. Jude’s it’s a place of hope and of discovering how to help sick children. When they are there with their families, its free. It’s something that is an inspiration and we wanted to get behind it.”

Net proceeds for every copy of “Our Christmas Wish” sold in the U.S. will go to St Jude Children’s Research Hospital, which is leading the way the world understands, treats and defeats childhood cancer and other life-threatening diseases. The Ten Tenors’ record sales have already raised over $1 million for the organization.

St Jude Children’s Research Hospital has an ongoing alliance with the music community through “Music Gives to St Jude Kids.” That’s a natural fit with the Ten Tenors’ commitment to focus their charitable efforts on children’s programs.

Spending as much time as they have in the U.S. “one of the great things is you end up in places you would never end up in if you weren’t touring,” said Edwards. “I love Kansas, where I absolutely fell in love with their barbecue. That’s my kind of vibe.”

Naturally, I suggested that Edwards try one or two of the fine barbecue establishments in the Hidden City when they return next week.