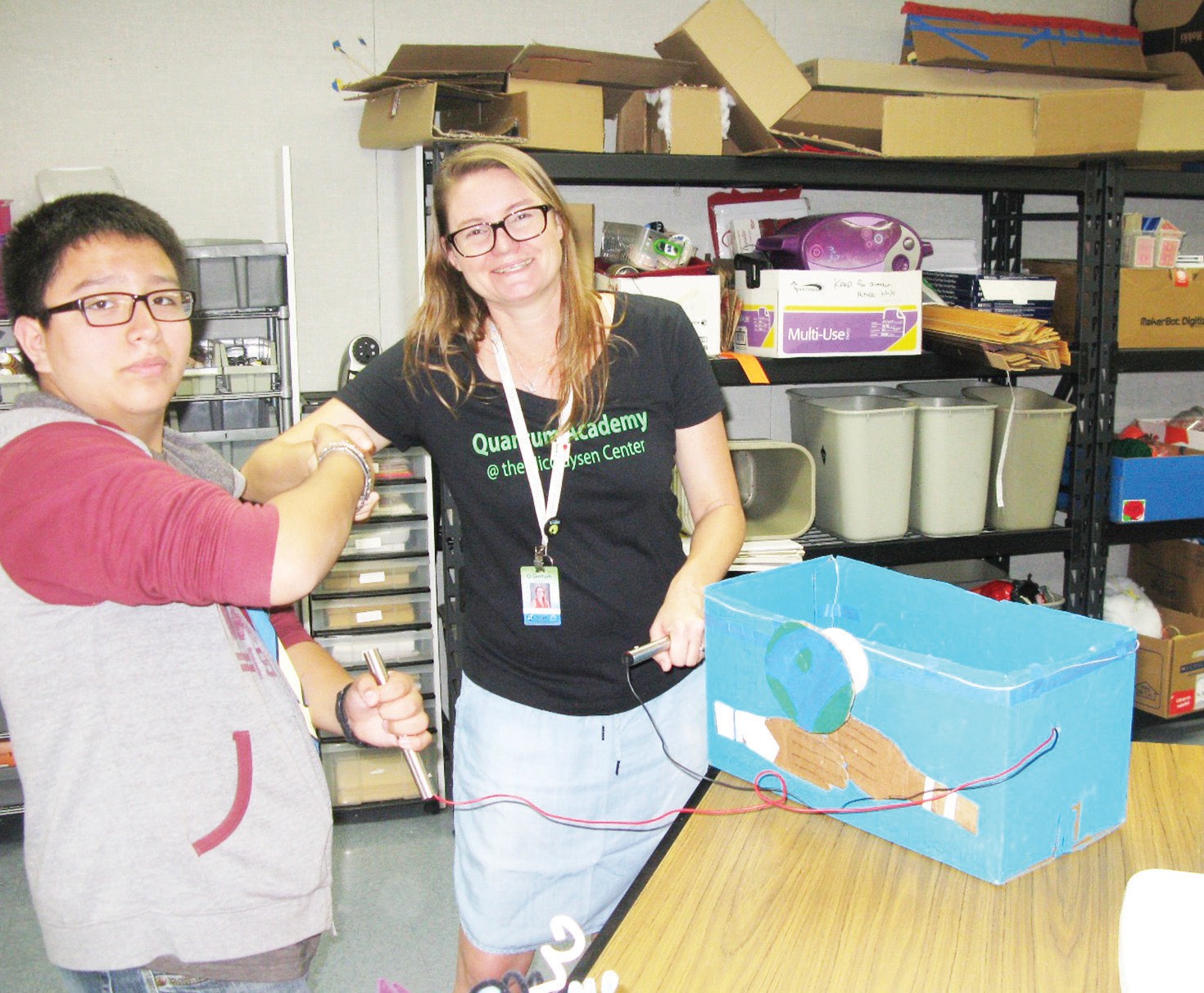 On a trip to Quantum Academy in October, I witnessed a gathering of students and educators who were flying drones the size of dinner plates with four propellers in the large, air- and light-filled central room of the school. My mission was to interview an award-winning teacher, Vanessa Miramontes or “Ms. M” as everyone calls her.

Last week I returned to the charter school to be greeted by Jo-Ann Fox, who is this year’s winner of the Innovative Technology Award from the Classroom of the Future Foundation.

Principal Ted Kirkbride and Jo-Ann brought me to Ms. Miramontes’s classroom, where we were approached by sixth-grader Samantha Galvas, who held a sign that said “Greeter.” She greeted us and asked if there was anything she could do.

This was the first hint that something strange and wonderful is happening in this school of the future, where students take the initiative in what they want to learn.

Ms. Fox selected a student, Jose Julian Sanchez, 12, and we repaired to the technology workroom at the back of the school. There Julian showed us his project, an engineering and art project of a pair of hands shaking. It was inspired by the class project theme of creating world peace.

“We have choice-based classes that students get to participate in … Mon- days through Thursdays for the last fifteen minutes of the day,” Ms. Fox said. “We call that time Explorer Time and Element Time,” Fox said. The teachers pitch ideas for future classes to students, who will decide on which of the proposed classes they want to take.

Fox prompts Julian to speak, asking, “What comes next Julian?”

Julian: “We pick three of our favorite choices and then Ms. Fox selects which one for everyone to take the classes.”

Whatever happened to the Three Rs? How can these students have input on what they are going to study?

Fox says to the T-A reporter, “We adopt our classes based on what our kids want. So this was an Explore class. To Julian: “Do you remember what it was called?”

Julian then demonstrates his Explore project. A blue cardboard box has two painted cardboard hands pointing toward each other. He hands me a small aluminum pipes wired into the bright blue box. When I take it and Julian takes his and we shake hands, the hands on the both start shaking each other, mechanically, wildly. I can’t help but laugh. “How does it do that?”

The young scientist, also a sixth-grader readily tells me how it works, that our bodies are water-based conductors that complete the circuit that causes the handshakes for peace.

He told how he worked out the bugs in the system with the help of another teacher. He had to work on getting the hands to look like they were shaking instead of flopping around at first and he wanted them to come to a stop in a neutral position.

With a little prompting from Ms. Fox Julian tells us about his current group’s project, which will have robots mimicking events of the Olympic Games. Julian’s project is on boxing.

“I’m in Olympics with Lego Mind Storm. It’s more like little bits but with Legos,” he says.

Ms. Fox: “We have another group 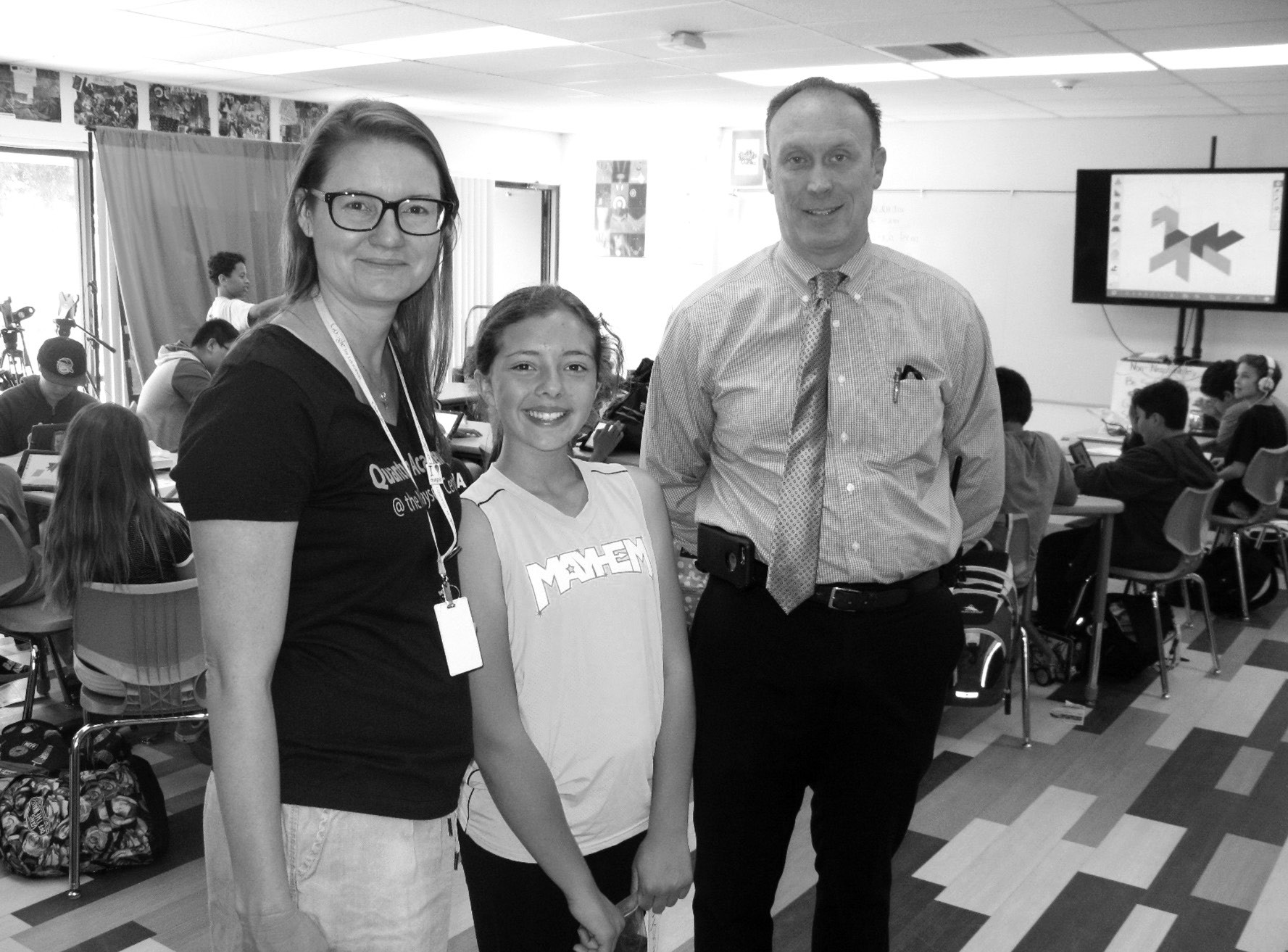 Jo-Ann Fox, greeter Samantha Galvas and Principal Ted Kirkbride gave a hands on briefing about education of the present and future at Quantum Academy last week.

that is going to do some (robotic) organized swimming, but these robots will not work in water so we can’t …”

Julian: “They will if you use Spheros … you can …”

Fox: “Yeah, I guess the Spheros we could swim in water …

Julian “Or you could put some of them in something waterproof.”

Fox: You see! Push-back, I love it! That’s taking an idea and taking it to a bigger level. It’s a positive ‘yes-and’ where you have an idea and instead of saying it’s not possible you say ‘yes-and.’ ”

Later, Ms. Fox shows a project that has cardboard dolphins, whose tails wiggle, in a net made of colorful pipe cleaners, another engineering plus art project using the little bits.

“That’s STEAM learning, Science, Technology, Engineering, Art and Math.” Those are the subjects upon which Quantum Academy is based,” she says.

She grins as she shows a class project that involves creating a golf course for the Spheros. It’s a long, undulating fairway in cardboard that pleases her.

“This was one of our students who was actually reluctant. He didn’t want to be in this class, it wasn’t his first choice. Now he’s fully engaged, I can’t get him to stop,” she says.

Principal Kirkbride says, “It’s about adding a challenge. They become problem finders. Jo-Ann has them look for problems and then start solving them too. She’s adding a challenge that lets (the students) know there are a lot of problems in the world that need to be solved. So they can learn how to jump in and help creatively.”

Cardboard is an important commodity for the young STEAMers. “I’m hearing the kids now saying things like ‘that’s a good piece of cardboard.’ So I know we’ve done our job when they start analyzing cardboard quality,” she says.

Ms. Fox also brought her students into a nearby county-run Medical Therapy Unit to visit disabled children. To expose them to real-world problems she had them interview staff and patients.

“They were learning about things they had never heard about and they didn’t know life was the way it was for some of the other kids,” she comments.

Students brainstormed an event called The Quark Arcade (the Quark is the school mascot) using what they learned in the interviews. They created games that wheelchair-bound kids could do: ingenious cardboard-based arcade games, pinball, under- and overhand beanbag tosses, and invited kids, parents and staff from the facility to Quantum Arcade Night. The handicapped and their families loved it.

“So, if school is what we design to facilitate that product, that learning, who are the closest people to design that product? Our teachers. So it kind of goes up from the bottom in our school. Our students have an influence on learning. Our school is where that happens. … and part of that innovation is getting out of the way to let that innovation happen.”

Ms. Fox will receive her award at Future Foundation’s 13th Annual Innovation in Education Awards, to be held in the Shiley Theater at the University of San Diego on May 25.