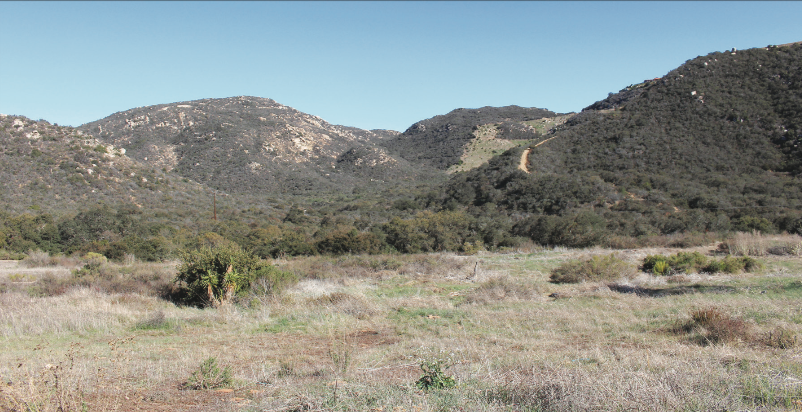 Last week I took a tour of the 1,209 acres where Newland Communities proposes to build 2,135 homes in seven neighborhoods that will mainly be hidden from each other, and from the view of motorists along the I-15 corridor.

We began our road trip on a frontage road that runs past the AM/PM that operates just off Deer Springs Road & I-15. This part of the development that is closest to I-15 is also where the 81,000 square feet of community and retail services, including a grocery store, and a pharmacy, will be built. This will probably be a welcome arrival since many of the I-15 Corridor communities are miles from such amenities.

I have driven on rough roads before. My cabin on Palomar Mountain is at the bottom of one of the roughest dirt roads that ever a Jeep traversed. These roads were in the running for that kind of rough, and there were times that I wondered if our trip might end with a broken axle. But, if Newland’s plans comes to fruition later this year, as they hope, the roads could become very smooth indeed within a couple of years.

Newland Sierra incorporates the Spanish word for mountain, and the project is planned to take advantage of the mountainous terrain that motorists along I-15 see every day when they drive along the freeway. However, from the freeway no homes will be visible.

The project, which bills itself as the first “carbon neutral” development (it is apparently in competition with Lilac Hills Ranch for that title. Whichever project that gets built first, wins.) will be spread out in seven distinct neighborhoods, that will be laid out so that, for the most part they won’t see each other. And from the standpoint of not making much of an impact on existing developments, their neighbors won’t be able to see them much either.

The flavor of the month among developers is the notion of zero impact on the environment (a ludicrous idea on its face, but an altar at which those who build homes are forced to worship lest the state of California sit on their collective neck.) The Newland people do it very well, with homes that will all have enough solar panels that they will supposedly contribute more to the grid than they subtract from.

The development will have bike-sharing, including a fleet of electric bikes that will be maintained for common usage. All the street lights, community buildings and facilities will be solar powered—along with electrical charging stations for those who have electrical vehicles. If you don’t have an electrical vehicle I suppose you will still be allowed to buy one of the homes, but your neighbors will think worse of you.

At any rate the developer takes its “environmental stewardship” quite seriously and brags that it will be setting the “new green standard for sustainable communities in San Diego County.”

As long as they are addressing the County’s housing shortage I’m willing to forgive a little virtue signaling.

At the end of the two hour trip around the land that will someday be transformed into one of the largest developments in the area I promised myself that someday I will take another road trip to see what Newland Sierra has wrought. It should be very impressive. And I already know that the scenery will be spectacular.

7 responses to “Taking a drive on the wild side: visiting the site of the Newland Sierra development”