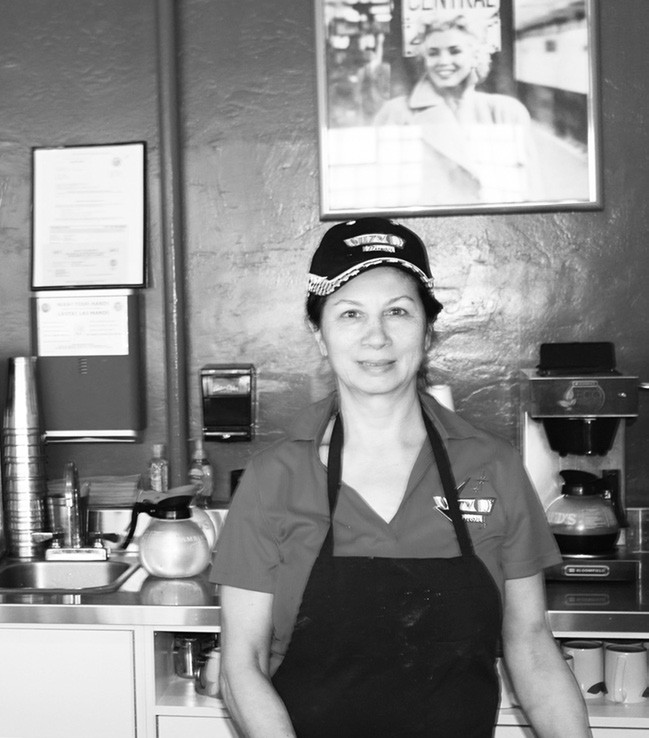 Suzanne Iseminger is the owner of Suzie Q’s Diner in Escondido. Look out for her homebaked cinnamon rolls on weekends.

Looking for biscuits and gravy like your grandmother used to make, only better? Or fried pickles? Do you have a hankerin’ for country fried potatoes made from fresh spuds? If so, then we may have found your new favorite place.

Suzie Q’s Diner, located at 258 E. 2nd Ave. (corner of Juniper & 2nd) in Escondido, offers classic diner fare amidst a fun atmosphere of the 1950s and 60s. It’s family owned and operated at a highly visible location that has seen several iconic establishments over the years such as the old Metaphor Café.

You’ll find menu items such as the Ricky Ricardo (two eggs scrambled with chorizo, jalapeños, tomatoes, onions and cheese with jalapeño hash browns), 50s style burgers such as the Bobby Sox Burger, the John Wayne (a quarter pound beef patty with barbecue sauce, cheddar cheese, fried pickles and onion straws) and the Big Bopper (a double patty with sautéed mushrooms and onions, topped with Swiss and American cheese). All the burger patties are made from fresh hamburger meat hand patted.

There are sandwiches such as The Hop, the Hound Dog, the Mickey Mouse Club Sandwich and the Mickey Rooney and the Marilyn, (which is made with grilled marinated chicken breast with bacon, avocado and Swiss cheese on a whole wheat bun).

Yes, there is a Suzie! Suzanne Iseminger has been in the restaurant business for 35 years, at so many restaurants that one might easily lose track of them in the telling. She has also been in the catering business. She worked at the Del Mar Champagne French Bakery for ten years. She was also chef and caterer for the Eurest Compass Group, which provides corporate dining. Suffice it to say that she knows her way around a kitchen and that you as the customer will benefit from it. Add to that the fact that she is obviously a true “foodie” in that she loves to talk about food and its preparation. You’ll find her in the kitchen in the back of the restaurant on most days.

Suzie Q’s opened on December 21 of last year. After three months in business it’s easy to tell what the most popular menu items are. They include the Biscuits and Gravy, made from an old family recipe using Jimmy Dean Sausage and bacon fat; served on homemade biscuits 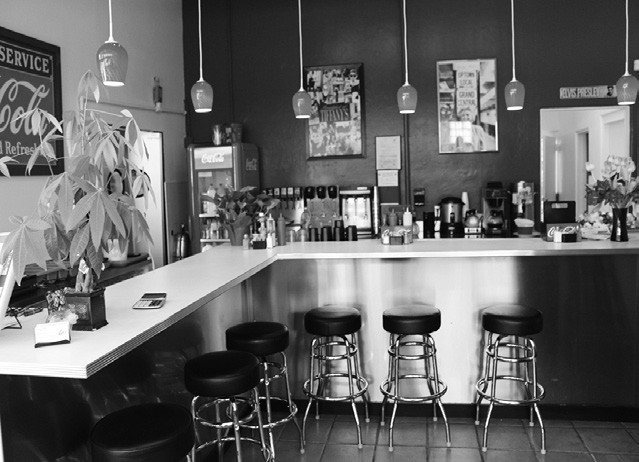 The decor of the diner is classic 1950s style. You almost expect to see a Bobby Soxer go swinging by!

and full of flavor.

The Country Potatoes are made using fresh potatoes, peppers, onions and garlic. The chicken breasts are fresh and marinated. For the fish and chips they use fresh fish (never frozen) breaded with panko.

“I’m soon going to add corned beef and hash,” says Iseminger. “It will be made with fresh corned beef, hand grated and with a little bit of milk added. It’s sooo good!”

She adds, “We stick to the traditional fare of the 1950s. Most diners don’t do this.”

Everybody loves the fries at Suzie Q’s, and customers try to figure out what gives them their particular flavor and crispness. The secret is ranch seasoning and seasoned salt. Oops! The secret is out!

Many of the burgers are topped with fried pickles and deep fried onion straws. The onion rings that you can order on the side are made with beer batter.

Iseminger makes most of her own sauces, salsa and dressings. When I interviewed her she was adding a big screen television and some big speakers to enhance the 1950s atmosphere of the place. “One complaint was that it was too quiet,” she said with a smile. “We’ve got an old juke box, but people wanted the period music blasting a little bit louder.” The TV will be tuned to, what else? popular shows of the period and old movies.

There are some special menu items on weekends, including special soups and fresh cinnamon rolls.

There are no reservations at Suzy Q’s, but plenty of seating, including seven tables outside so you can enjoy Escondido’s lovely mornings, afternoons and evenings.

Q’s, but plenty of seating, including seven tables outside so you can enjoy Escondido’s lovely mornings, afternoons and evenings.