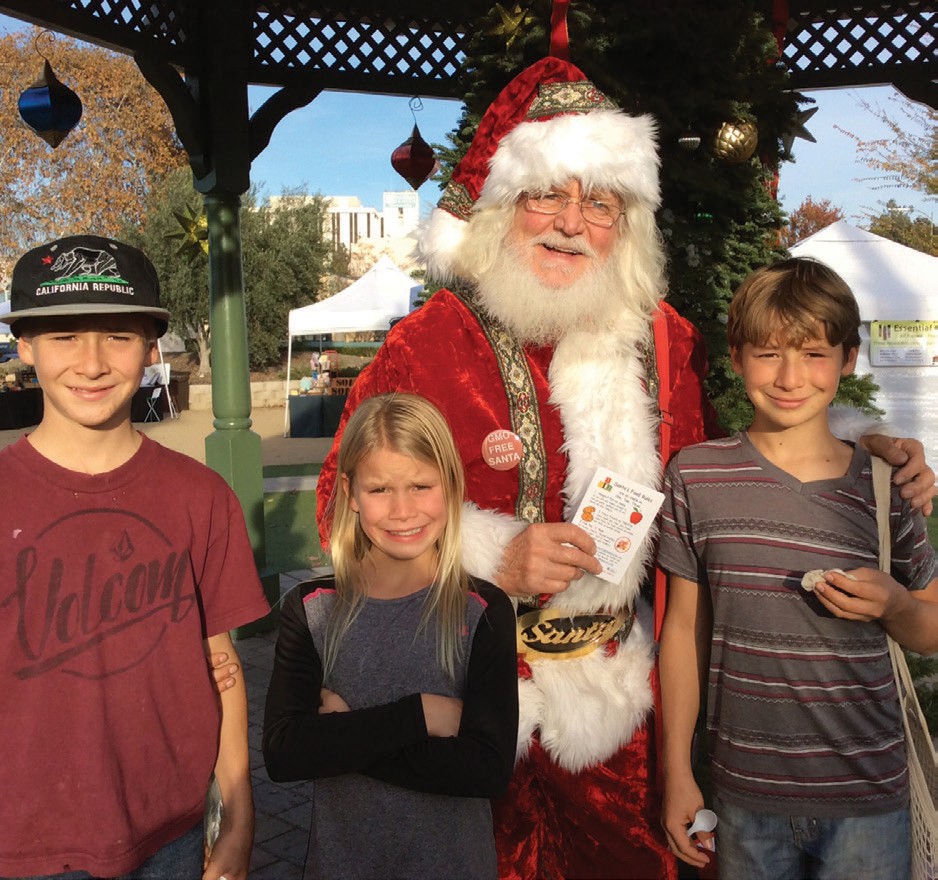 Santa with three health conscious youngsters he met at the Escondido Farmers Market.

Santa Glen, the member of the Real Santa’s United (RSU) to end Childhood Obesity had called in telling Sustainable Santa he could not be at his post as a Healthy, Happy Santa in the Escondido Farmers Market, held each Tuesday 2:30–6 p.m. in the park at the corner of Juniper Street and Grand Avenue.

Filling in for him, thought Sustainable Santa (hereafter called SS or just Santa), would give SS a great opportunity to assess how Santa Glen was doing with regard to the mission of the RSU to present their program intended to switch America’s children OFF the Fast, Junk/Snack and Processed “food” in favor of eating “Real Food” – the type available at Farmers Markets.

To Santa’s delight, virtually every family approaching Santa, as he took up his position atop the small hill next to the Christmas Tree under the Park’s Gazebo, had not only been given one of the cards containing Santa’s 3 Food Rules – rules designed to wean kids off the unhealthy fare many now consume – but they all said they had “successfully answered all the questions.”

Questions? What questions? Santa thought. So he asked. “The ones where Santa asked us to name three vegetables in each of the six colors on his ‘Eat the Rainbow’ chart”- came the answer.

Some said they had trouble with the Orange color – answering “an orange” only to be coached that an orange is a fruit, not a vegetable. Plus it is full of “natural sugar” the Santa had told them – so “eat that orange – don’t drink it” Santa Glen had admonished the kids – reminding them that the fiber in the orange is also important to consume.

For others, the Whites were challenging. Cauliflower had been the prevalent answer. And onions. Few had remembered that turnips and parsnips were also important choices.

“Of course,” thought SS, Santa Glen had spent his career teaching 3rd Grade. How clever of him to turn the Real Santa’s United’s push to have kids “Eat the Rainbow” into a quiz.

SS continued to pose for 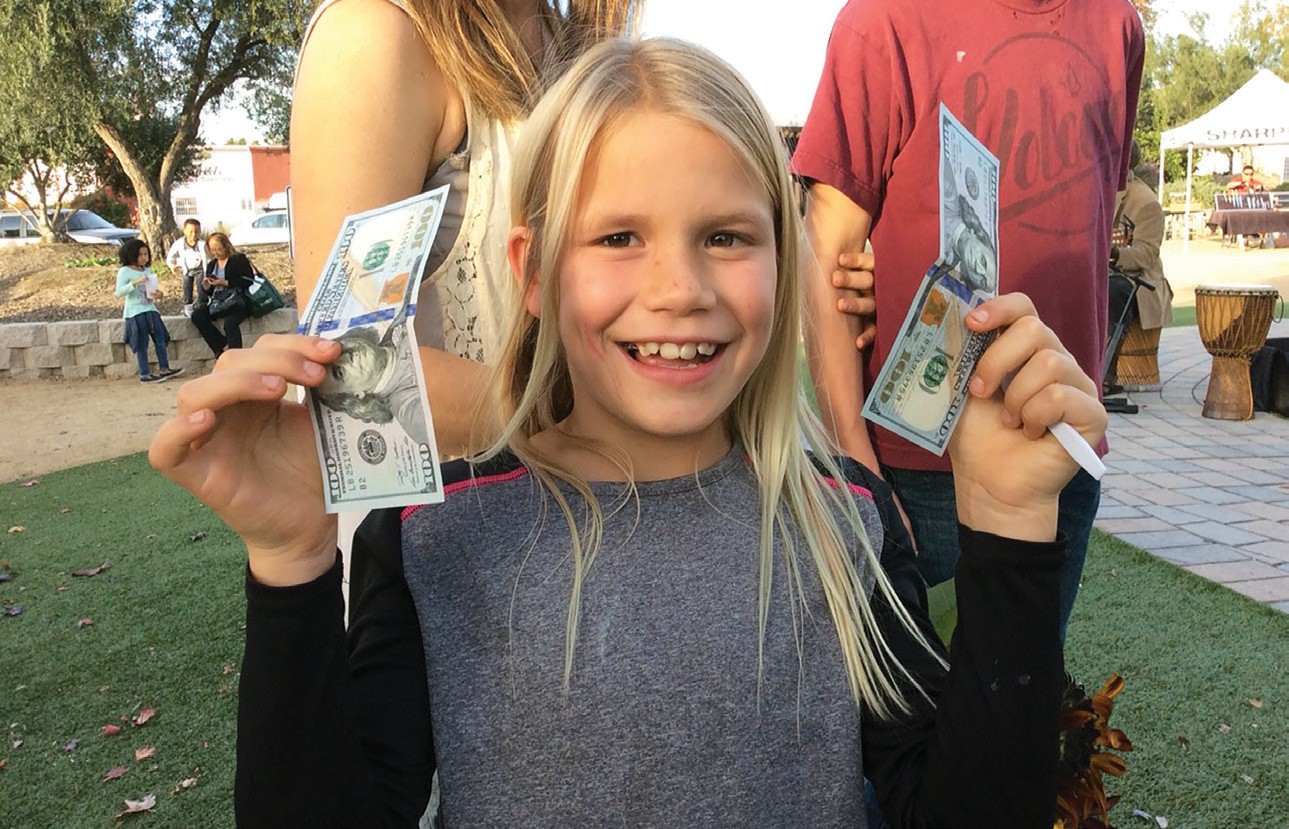 One of the children shows off the $100 bills that were presented to her and her two brothers by members of the Escondido Police Department, upon recommendation by Santa.

pictures with the children, which the parents happily took with their cellphone cameras.

Then up stepped a trio: Two older brothers and the younger cute blond sister. They seemed bored with the prospect of taking that picture, but Mom was insistent. That was until Santa produced the “3 Food Rules” card. Santa began reviewing the logic of Rule #1 designed to get kids to STOP eating snacks without thinking: “If you’re hungry eat an apple” goes the rule. “What!… you don’t want an apple? – Well if you’re not hungry enough to eat an apple, then perhaps you are not really hungry – and the thought will pass.”

“We know that,” said the trio. “Mom taught us that years ago.” Then one by one, as Santa started to discuss Rule #2 and 3, the kids would finish his sentence. They knew all the rules cold – and lived them. They want on to delight Santa with stories of how they helped Mom make batches of Kombucha (fermented green tea with enormous probiotic value) and how they never microwaved food but prepared it in a wide variety of nutrition conscious ways.

Santa told them they were the most up-to-date kids he had ever met, and surely they would spend their life living the RSU’s goal of helping children be “Healthy, Happy and Fit for Life.” Mom took the picture; they took the Food Rules card; wished Santa “Merry Christmas” and walked away.

Within seconds Santa was approached by two uniformed Escondido police officers. They were on “assignment” from the Police Chief to find some children deserving of receiving a “special gift” donated by a “Secret Santa” in Escondido. Did Santa have any suggestions?

Santa pointed to the trio and their mom who were now less than 10 yards way. “Reward those who know and follow the rules of good nutrition,” said Santa. Role models like these kids deserve a “special gift.”

The officers hailed the foursome and pulled out their note pad as if they were going to write them a ticket! They asked their names, what schools they attended, and if they were to receive some money – donated by a “Secret Santa in Escondido 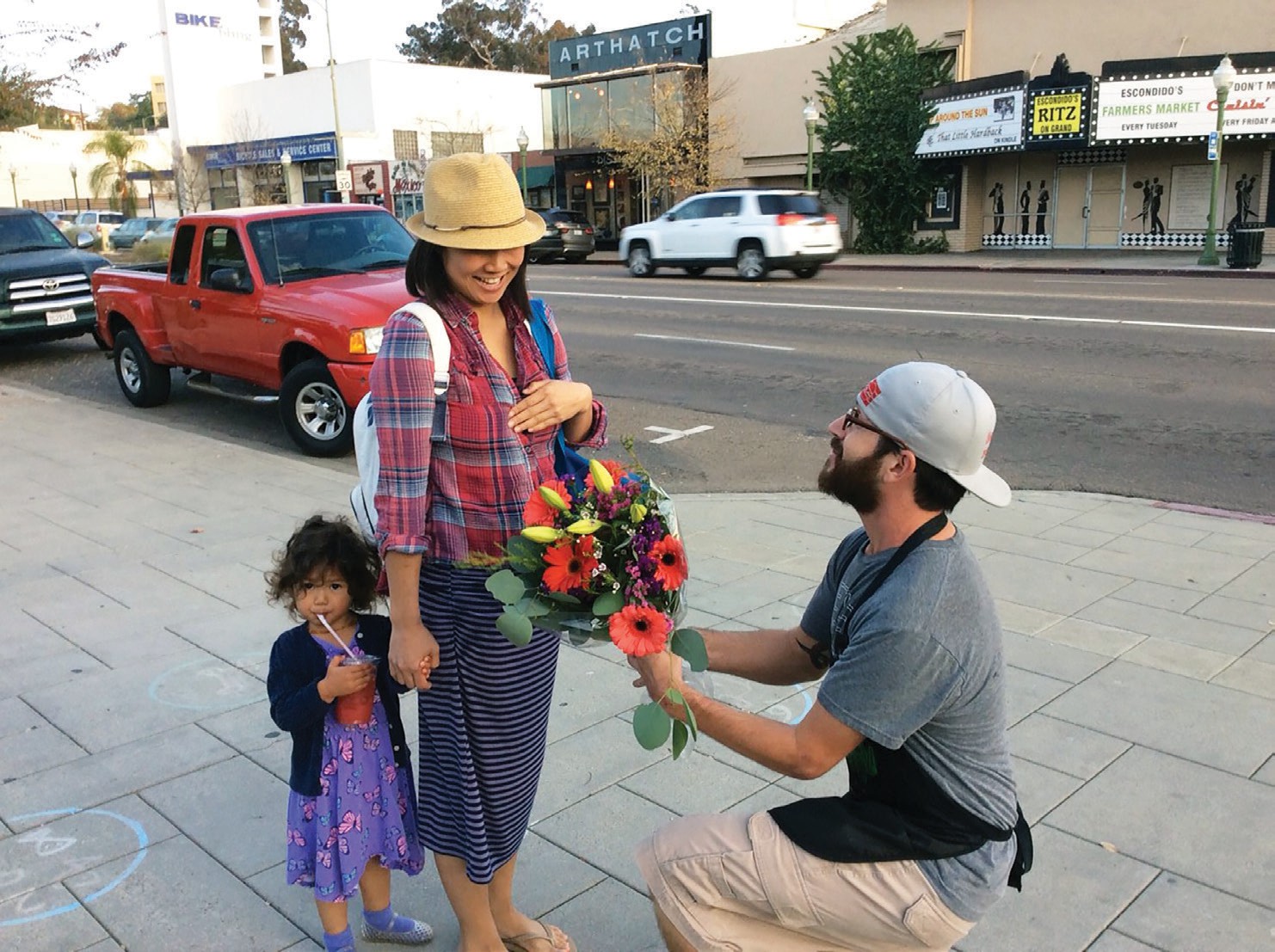 Daniel (known to locals as “Dan the Man”), makes his flower bouquet pitch on his knees.

– known only by the Police Chief — would they use it responsibly?

They assured the officers they would — and the taller of the two policemen produced two $100 bills, handing them to the children – who quickly agreed to divide it equally.

The little sister took custody of the two bills.

They talked more with the officers, then off they went – delighted with their reward for their responsible eating behavior and their following a sustainable lifestyle.

The officers thanked Santa for his assistance, and then they too disappeared from the park.

What a glorious community Santa Glen lives in, thought Sustainable Santa – filled with responsible kids, generous “Secret Santas” and friendly police, with whom Santa did discuss the 3 food rules, which the officers promised to post in the “break room” at the police station.

Under interrogation, the officers admitted that Rule #2 – “Treat Treats as Treats – don’t make those special occasion foods like cookies, donuts, and bagels a daily or weekly affair.” – They had to admit that this rule “was not routinely followed.”

If they did post the rules on the police headquarters wall, Santa promised to “not write up” the members of the Escondido Police Department and put them all — on his list reserved for those who don’t “Eat Real Food” and indulge in too many snacks. That’s the list you don’t want to be on – and that’s just the facts!

Santa went on with his evening at the Escondido Farmers Market – meeting and greeting more families and friends – most of whom had already been schooled on healthy eating – by Santa Glen,

Daniel (known to locals as “Dan the Man”) is an icon in Downtown Escondido. He is always filled with JOY, not just at Holiday time, but 365 days a year. He patrols Grand Avenue in his “Beat the Bench” hat – referring to his habit of often eating at the “Burger Bench” restaurant on Grand, less than a block from the Farmers Market. “The food is great and I love eating there,” Daniel told Santa, but then you have to walk the city or you will 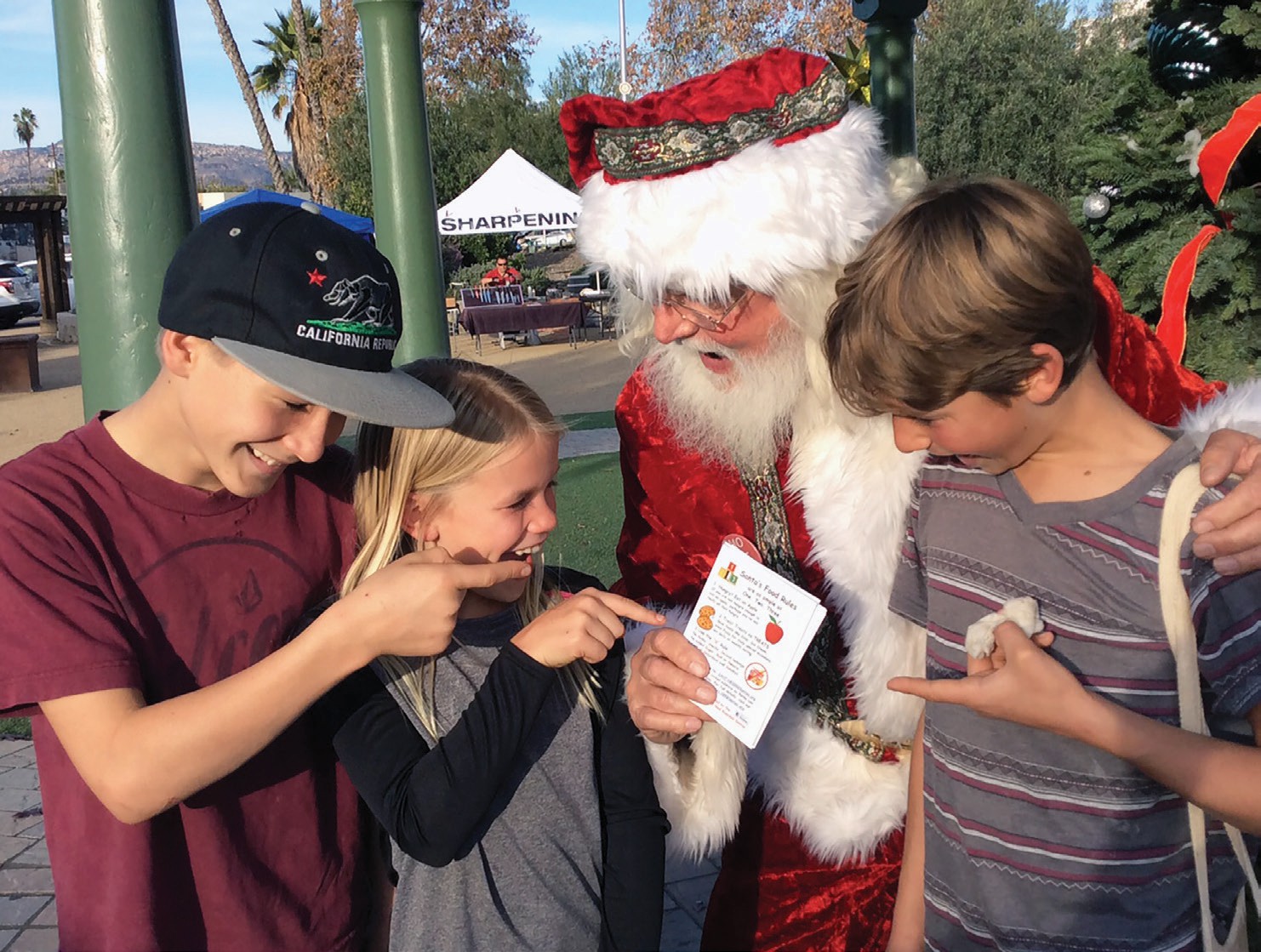 Two brothers and a sister demonstrate their knowledge of Santa’s 3 Food Rules.

be wearing their fare – thus his “Beat the Bench” hat reminder.

During the Market Daniel works for one of the fresh flower vendors where he roves the street with bouquets in his hand.

His sales pitch is both respectful and effective. He reminds the prospective customer, who may not have thought of buying flowers at the market, of their beauty and freshness – but he does this on one knee, as if he were about to propose marriage.

It always works, and he returns to the flower stall to get another arrangement – and off he goes again.

Between market days Daniel does a variety of important tasks as a volunteer to the City.

Sustainable Santa had met Carl Garlick and his very health conscious wife Dana the week before at a Santa meet-n-greet sponsored by Green Thumb Nursery of San Marcos (one of the many sponsors of the RSU). In his retirement years Carl runs a knife sharpening service at farmers markets and at other locations around San Diego County.

At Green Thumb they had talked about the “mission” of the Real Santa’s United – to change the message and the image of Santa from one which promotes mindless consumerism and consumption of unhealthy foods, which most certainly includes the added sugar in items like ‘’candy canes” – to a Santa who promotes kids eating a healthy diet and living a sustainable lifestyle.

In that effort, Green Thumb Nursery provides packets of seeds which the North San Diego County Healthy Santas give to the children visiting their Farmers Markets, urging them to plant a garden. This year there are 7 Healthy Happy Santas in 12 Farmers Markets in San Diego County alone. Elsewhere in California, the RSU Santas obtain seeds from their local nurseries, all of whom get “recognition” for their support of this “Healthy Children’s Initiative.”

Dana Garlick wanted a copy of Santa’s “Eat the Rainbow” Poster to post in the “lunch room” at the billing office of the hospital where she works. Even at a hospital she encounters the same abuse of “Rule #2 Treat Treats as Treats” where bringing cookies and donuts into work is 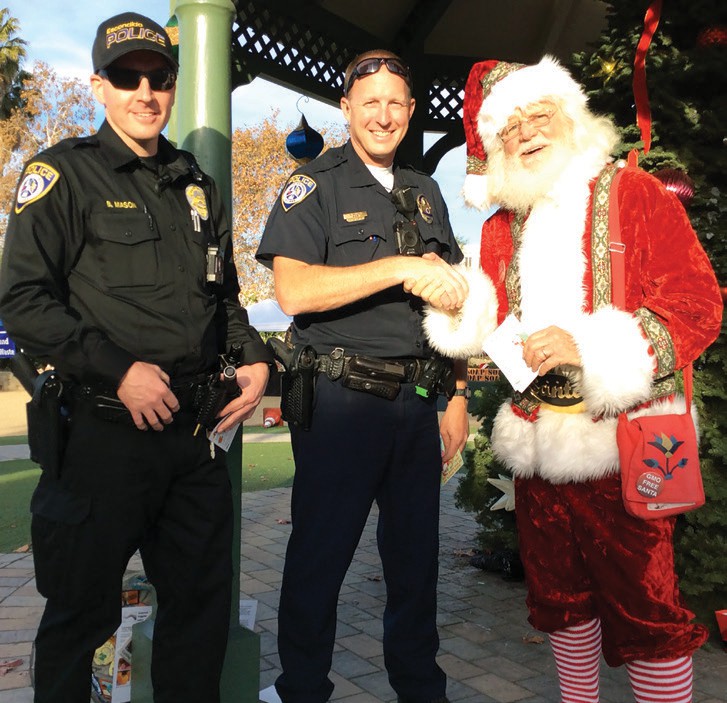 Santa gives a recommendation to Escondido police officers about some kids who deserve to be recognized for their good eating habits.

a common practice – same problem as was encountered by the Escondido Police Officers. She hoped Santa’s admonishment to follow his 3 Food Rules would change some of her colleagues’ behaviors.

Carl recalled how he and his brother had encountered a “stink breath” Santa back in the 1960 and promised to bring that picture to the Escondido Market.

With great flourish, at the Escondido market, Carl left his knife sharpening tent to show Santa the treasured family photo with Carl seated on the right looking to his Mom with a “get me out of here” stare. Meanwhile his brother exhibits a “stank face” as he dissolves from the breath of the “real bearded Santa” on whose lap both were seated.

While most Mall Santas do practice proper hygiene, there are some important differences between them and the members of the Real Santas United, where in the Farmers Markets the Healthy Santas go “bare-handed” rather than wearing gloves which can pass germs, viruses and bacteria between kids visiting their lap. The RSUs apply an Aloe based hand sanitizer to their hands between each child in an effort to promote good health.

The Real Santas United also NEVER wear a padded pillow to enhance their stomach to fit that “Coco-Cola Santa Image” of the FAT guy in the red suit with the White cuffs = Coke’s colors.

The Real Santas United are there to “Stand UP” to the advertising blitz of the “ill-health” providers – and not just “Stand BY” and watch the tsunami of ill-health driven by the deplorable “American Diet” continue.

That is one of the many reasons why parents now bring their children to the Farmers Market for that holiday picture with Santa – making the Farmers Market their Christmas shopping destination of choice – a place where “Health and Happiness” truly Lives!

Chris Moats, the manager of the market, which is operated by the Escondido Arts Partnership, kicked up her heels with joy at the fact that the Tuesday night market is becoming the preferred destination for Christmas shopping – not just for healthy veggies but for clothing, cosmetics, and other unique artisan gifts not available in the mall.