A joint survey by SANDAG and Caltrans will help those regional agencies identify integrated transportation solutions that enhance the way people travel throughout North County. It might also help them come up with ways to spend Joe Biden’s infrastructure bill funds, i.e. your tax money.

The more people who participate and the more diverse groups participate the more likely that the plans will represent the needs of the community.

SANDAG (San Diego Association of Governments) and Caltrans in association with the North County Transit District, and all the cities along the corridor that stretches from I-5 along I-15 to Hwy 76 and Hwy 78 are developing the Comprehensive Multimodal Corridor Plan.

“We want to look at transportation as a system in that area and figure out how to make the system work better, both now and in 2050 as technology changes,” said Kosup. “How do people move around, where do they want to go? What is working what isn’t working for them.

The survey will remain open until April 30.

The North County Comprehensive Multimodal Corridor Plan virtual engagement hub is a great, one-stop shop to learn more about the project and stay up-to-date on engagement opportunities such as surveys and public meetings. It includes an interactive map feature, where the public can provide specific feedback using virtual pins on a map of the North County study area.

A Comprehensive Multimodal Corridor Plan (CMCP) is a detailed blueprint for how people will get around a specific area of San Diego County and is required for our region to be eligible for certain state and federal funding and grant opportunities, including SB 1 funds.

The North County Comprehensive Multimodal Corridor Plan is expected to be completed by late 2021.

“We want to find out what works for them. What are their priorities? How would they like to move around and what are the barriers to them moving about in a clean, green manner?” said Kosup.

Historically, he said, agencies plan their infrastructure separately.  The idea of the survey and other methods of keeping track of people, such as monitoring where cell phones go, is “to follow them as they leave the house and go about their day.  How do you put all that together and make that an effective trip.”

Collating this data is a mixture of technologies. “Through technology we have a better understanding of where people are headed,” said Kosup. “It’s not detailed information, and it’s not tied to individuals, but as their phones move around that is one insight to knowing where this herd is going. How long does it take them to get there? We can capture some of that information from cell phones, through engagement, public meetings and surveys. This survey is the first of many,” he said.

Scarlett added, “The survey is underway. We started the process last week. It’s going to go through  April 30.” The survey is in both English and Spanish.

The Virtual Engagement Hub, with its interactive map, allows people to drop in comments of areas of concern. “It is one way we can get feedback from the community and what is important to them transportation wise. So we can capture their needs,” said Scarlett.

He added, “Everyone has different needs. We want to be as broad-based as possible. There are different demographics and age groups. They all have different transpiration needs. Some are going to the doctor, or to school. Or to work. When we talk about system, it’s vehicles, transit, the Sprinter, sidewalks. We’re trying to get the broad base of transportation.”

They are going after a virtual “laundry list” of stakeholders, said Scarlett, such as Cal State San Marcos, Palomar College, Palomar Health and community based organizations. “We presented the CMCP to these groups to get initial feedback and to access what their needs are.”

They also have a technical working group with representatives from each of the cities, as well as county representatives and representatives of North County Transit District. “We meet with these folks monthly and for the stakeholder group we meet quarterly,” said Scarlett.

They meet with representatives in tiers. “The general public is the third tier and that’s where this survey is important,” said Scarlett. “We want to get the message out that this is a way to provide input. Anyone who is in the corridor or travels into the corridor is someone we want to answer the survey.”

The survey is totally anonymous. No name or address is requested. Those taking the survey can pass on answering some questions. But, it is important to know that answering questions such as age is important in determining who uses certain forms of transportation.

They want as many results as possible. “It’s about getting diversity of answers,” said Kosup. “We have 400-500 responses so far. The more insight we get the better. Four hundred is not overly representative.”

Asked whether Caltrans will be going after some of the “infrastructure” funds in the bill now being debated in Congress, Kosup answered, “We hope that we be very competitive to go after these new funding sources coming on line at a federal levels.”

Meanwhile SANDAG is looking at revising transportation for the entire region, a process that was begun with its publication of “The Five Big Moves,” which is a regional transportation plan.

“This is an element of that,” said Kosup. “What in this subregion are the specifics, getting into the details that address the specific needs. The people in Chula Vista are different from people in Escondido.”

It also includes on-going projects such as improving transit stations, improving coastal bike trails, which are underway but need to be completed, said Scarlett.

Kosup added, “This area continues to grow and we need to serve those new customers. We know the new customers get frustrated spending too much time in traffic. We also have climate change requirements and statewide requirements to reduce vehicle miles. To get people out of their vehicles and how to we make things competitive. We need to make transportation cleaner and fairer for all. So all people have access to where they want to go.”

Scarlett added, “This gives the community a chance to shape the future of transportation around them.”

You can find more information about the North County Corridor here or visit sandag.org/CMCP to learn about the other corridor plans. 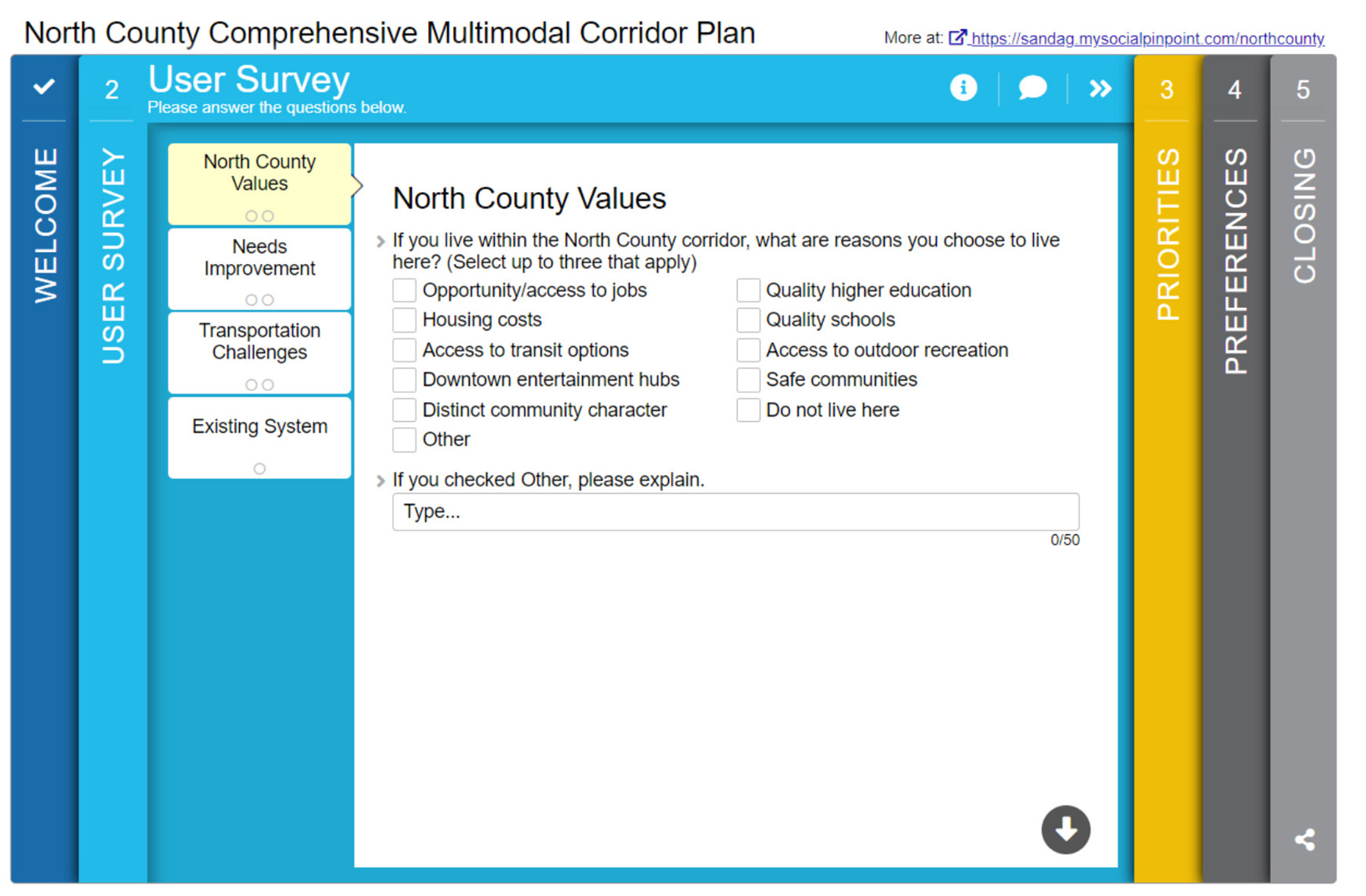 A screenshot of the survey that Caltrans and SANDAG hope that thousands of people will take.

One response to “Survey may identify N.C. traffic solutions for 660K people”