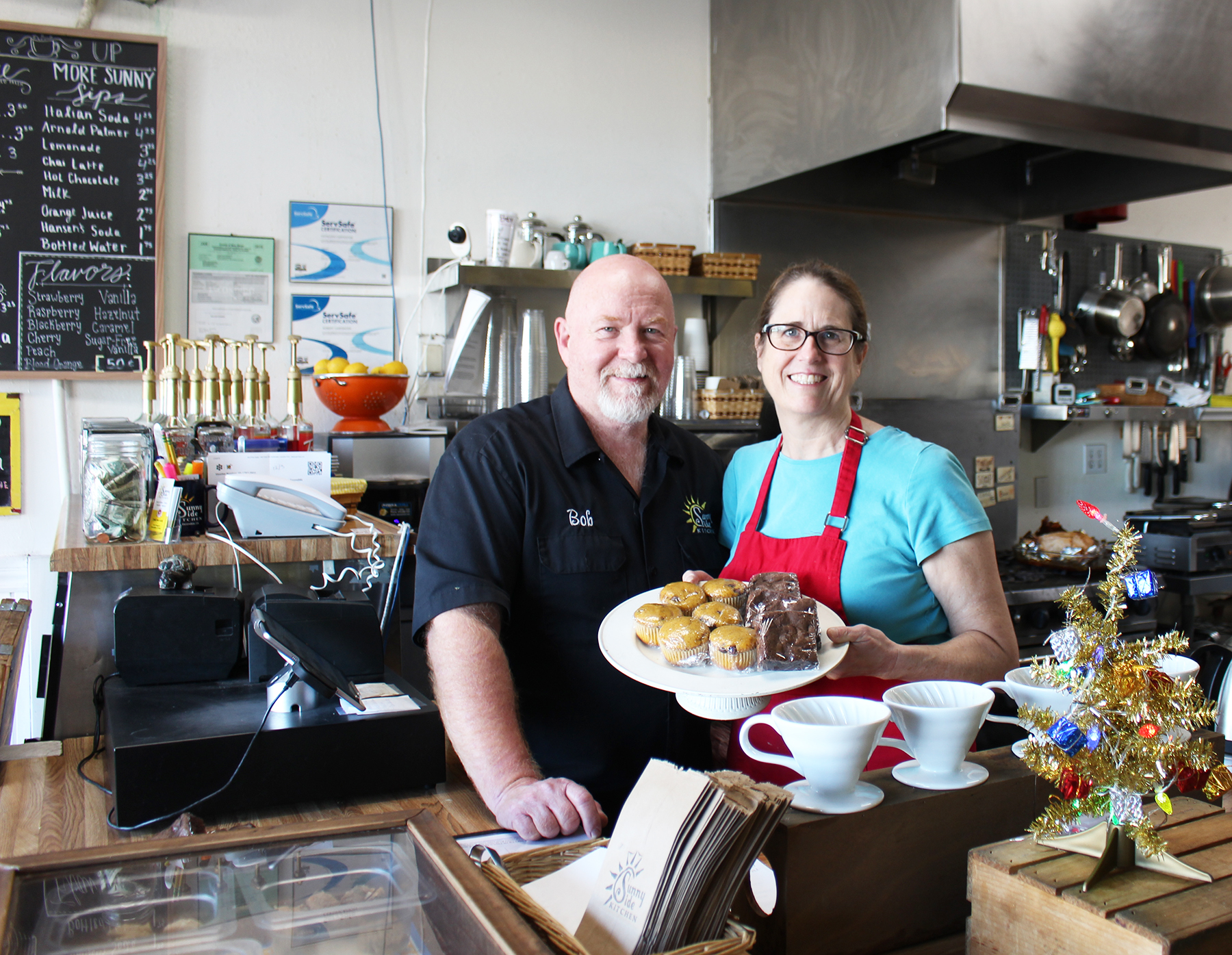 Bob & Kate Carpenter behind the counter at Sunny Side Kitchen, a place where everything is made from scratch and special orders are “no problem.”

Bob & Kate Carpenter have been the proud winners of Yelp’s “Top 100 Places to Eat” for two years running. Once, you might say it was good fortune. Twice and the Carpenters, owners of Sun Side Kitchen must be doing something very, very right.

In 2017 they were 51st in the list of eateries to visit and the following year they moved up to 45th place. That’s 45th in the U.S., not California or San Diego County. “We were surprised because we thought that once we got on the list that people would look at us with a more critical eye,” said Bob Carpenter, who, with Kate, has operated the small restaurant at 155 South Orange St., between Grand and Second Avenues.

In addition, the “Top Rated” service, which is an aggregate of a number of reviews, has ranked Sunny Side Kitchen No. 2 in California.

Sunny Side specializes in breakfast and lunch items, both served all day, and centered on panini sandwiches and the soup of the day. There’s just one soup each day, and if that soup isn’t your cup of tea, you should probably stick to a salad or panini. But don’t forget to try their bite-sized cookies!

Their signature menu item is the Tuscan Chicken Panini, made with oven-roasted chicken (hand shredded so you only get the best parts), homemade roasted tomato aioli, tangy sun-dried tomatoes and fresh spinach.

Another worthy menu item is  “The Works” Breakfast sandwich, made with egg, cheese, bacon and avocado. Have that for breakfast and you won’t have any hunger pangs before lunch.

There’s no excuse not to know what the Sunny Side Kitchen will be offering this week because you can sign up for their weekly email blast, which will clue you in on what to expect each day. They strive for seasonal offerings.  “If we know it’s going to be cold, we’ll make a hot soup that will reflect that,” said Kate Carpenter.

Because they get a lot of tourists who are in town to visit the Safari Park and other local attractions the Yelp reviews help immensely.

“We do everything all day,” he said. “Like the meatloaf sandwich. If someone like a nurse is getting off an all night shift and wants that, we do it. We try not to say no to people.”

Most of their sandwiches start with cheese. They use a fresh Parmesan for the outside of the panini with Havarti and Munster on the inside. The artisan sourdough comes from San Diego bakery Bread & Cie. Coffee is roasted locally by Carlsbad-based Origen Coffee Roasters. Lemons for their lemonades come from the farmers market and avocados are delivered by local growers.

In February Sunny Side Kitchen will have been open at its brick and mortar location for four years, although they had been selling cookies at the farmers markets since 2012. Its location is a little funky, with one way streets running on either side of the little side street where it sits. Which means that, if you go to Sunny Side Kitchen, you probably went looking for it, rather than simply stumbling onto it.

“We think it’s our customers service that keeps people coming back,” said Bob. “We’re a small place and people get to know us and we know them. They see us in the back making their food. There’s no anonymity.”

The demographics of their customers is largely women between the ages of 25-45, which is similar to those who frequent your local Starbucks. With a major difference: “Our customers are people who want a small mom and pop place where they can see you making the food,” said Kate. “They like watching us build the sandwiches.”

“Most importantly,” added Bob, “They want to support local businesses.”

“We try to feed people what they want and what they need,” she added. “We have a huge population of gluten free customers or vegans, or people who say, ‘My kid doesn’t like this. Can you make it without that?’  She added with a smile, “We can make it YOUR way. Since we are creating everything by scratch it’s not a problem.”

He added, “We are attracting nice people. People are coming her looking for us. We know this because it’s not the kind of street that encourages people to just come across us.”

Here’s a story that illustrates how the Carpenters approach their food: A couple months back Kate and Bob went to a restaurant in Carlsbad. Bob said “This is the best cinnamon roll I’ve ever had!” Kate looked at Bob a bit sideways and said “Oh REALLY!” The next weekend she made a batch of cinnamon rolls and they were very good. The next Saturday she improved the batch and they were excellent. The third Saturday, with more improvements, Bob proclaimed, “THESE are the best cinnamon rolls I’ve ever had!” Sunny Side Kitchen has been making cinnamon rolls (Saturday only) ever since. They will be a seasonal thing, however, so get one to see for yourself before the end of the year.

The Carpenters have have been doing a lot of corporate catering. Kate told me, “We recently made 80 cold sandwiches for a training meeting in town. And we regularly have companies that buy for the entire office. Calling ahead assures everything is done on time.”

The Sunny Side Kitchen offers hot panini, cold sandwiches, salads, soups, cookies, craft coffee, specialty drinks. They serve breakfast and lunch in a casual, dine-in or take-out atmosphere from 6:30 a.m. to 2:30 p.m. Monday – Saturday. You can call in your order at 760-294-4450. Web site is www.SunnySideKitchen.com. Email is SunnySideKitchen@gmail.com. Order for delivery at www.MyHungr.com.