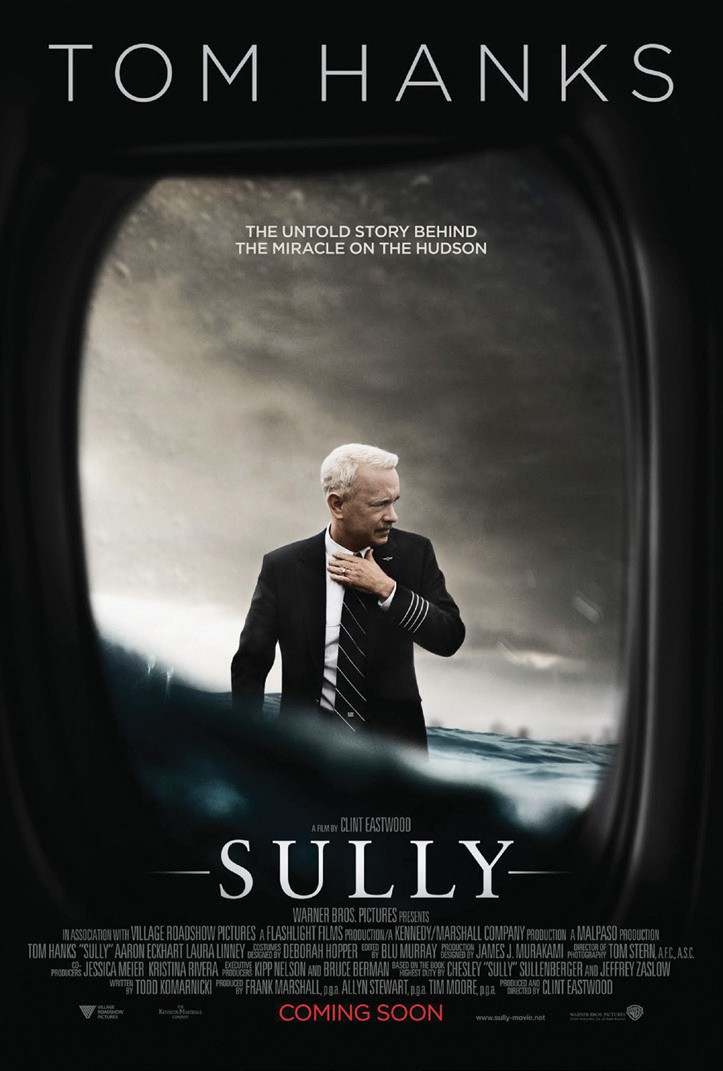 “Sully” tells the story of eponymous pilot Chesley Sullenberger (Tom Hanks), who on January 15 2009, after a dual engine failure in midair, landed a large passenger aircraft in the middle of the Hudson River. The landing was rough, unconventional, and controversial, but it saved the lives of all 155 passengers and crew on board. Though there were many heroes that day, including First Officer Jeffrey Skiles (Aaron Eckhart), Sully was proclaimed the biggest hero of all.

The film officially takes place a few days after the incident, as Sully is being hailed a hero, but is also facing an investigation from an inquiry board that seems unfairly antagonistic. He’s forced to relive the events of that day several times, and we are shown the incident three times in flashbacks. The first is interrupted by a cut to air traffic control, so we miss the most interesting parts. The second time is from the point of view of the passengers as they frightfully went through the near-death experience. And the third time is from Sully and Skiles’s point of view in the cockpit. I would have switched the second and third versions. Sully and Skiles are experts at keeping cool, which is certainly comforting, but it doesn’t make for the best movie climax.

It’s that version where we see the passengers surviving and being rescued that makes for the most exciting sequence in the movie. You are guaranteed to share in their fear and confusion. Knowing that everyone will be safe eventually doesn’t so much detract from the suspense as it makes it more bearable. Actually, the impact is one of the less scary parts of this sequence; maybe because it’s so quick, maybe because you’re probably over-prepared for its intensity. But the really nerve-wracking part is what comes next, the passengers actually being rescued from the plane. They have to go out onto the wings and a few inflatable surfaces that aren’t going to hold up for long, plus a few make the poor decision to just swim for it. Oh, and the whole thing takes place in January, so hypothermia is also a factor.

Sadly, someone made the mistake of thinking that this sequence alone doesn’t fill the film with enough danger. We are therefore subjected to a number of dream sequences in which Sully loses control of the plane and it crashes into the buildings of New York City. This is a cheap way of getting a reaction out of the audience, plus it makes this film’s release so close to 9/11 even more inappropriate. By the way, there is one line of dialogue that compares the incident to 9/11, and I found it to be in poor taste.

Watching “Sully,” memories of other Tom Hanks movies are bound to come up. His plane goes down, like in “Cast Away.” He guides his crew through a crisis, like in “Captain Phillips.” He’s inserted awkwardly into historical footage, like in “Forrest Gump.” That last one is an unwelcome distraction. We see the Hanks’s version of Sully being interviewed by the 2009 version of David Letterman and boy is it clear that the scenes were filmed seven years apart. You wouldn’t think it would be that hard to smoothly add him to such recent footage, but the task was apparently beyond this film’s capabilities.

I’ve been doing a lot of complaining about “Sully,” but it’s actually quite a good movie. The parts that need to be done well are done well, and Hanks is a workhorse as always. He’s able to find the right balance of calmness and urgency; a lesser actor would likely overdo the former at the expense of the latter. This movie makes a few inexplicable, at times unforgivable mistakes, but overall it’s competent. Maybe focusing on its competence is boring, but like Sully himself, it needs to be given credit for what it does right.

“Sully” is rated PG-13 for some peril and brief strong language. Its running time is 96 minutes.