Stone Brewery unveils a new menu and it’s a doozy 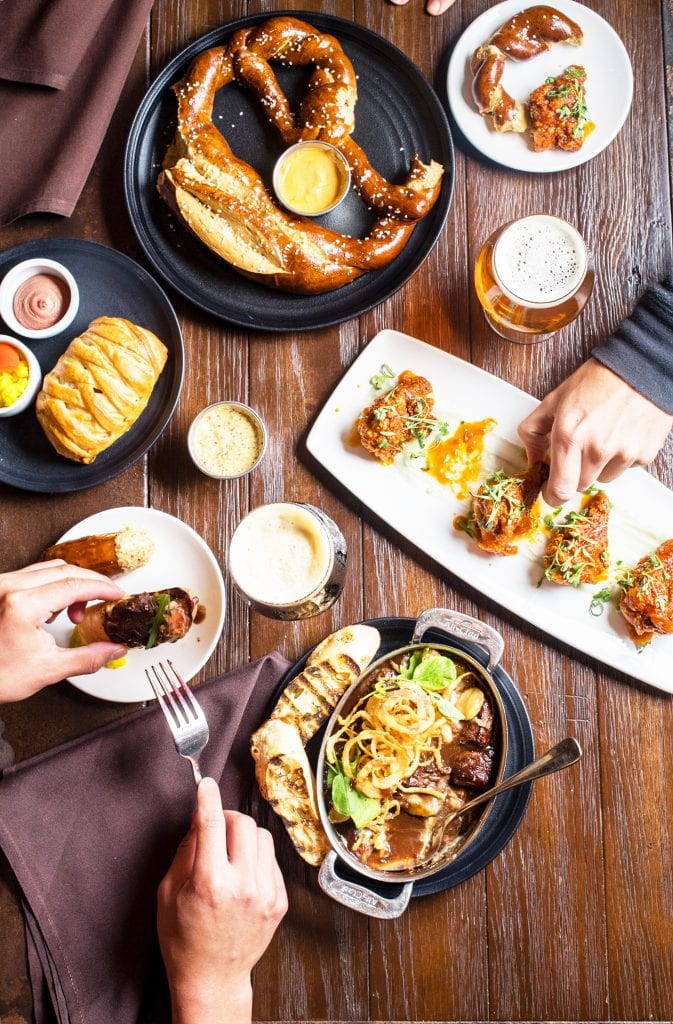 Both of us are dedicated “foodies,” although Dave makes no affectation to being a great cook like Jamie is. Dave can make scrambled eggs without burning them—most of the time. Nevertheless, we both know what we like—which is almost in any style, as long as it is superb!

If a couple of words could be used to describe how the new menu is different from the old one, it might be that it isn’t snooty or high-toned. It’s very vegetarian-friendly and certainly not blah. The flavors are distinct and vie for your attention.

Or, if only one word will do, let Stone provide it: “Approachability. We heard our food was pretentious.” Which, of course, is not what a brewery famous for “Arrogant Bastard” ale was aiming for. It is also affordable. You don’t have to take out a second mortgage or hock your Harley to have lunch or dinner here.

Yet the new menu didn’t skimp on quality and refused to get away from Stone’s original premise when it opened in 2006. That of eschewing “the industrialized food system [that] had traded quality and character for ease of production . . .”

Stone added a sizeable number of shareable plates that include Sausage Wellington, Yellowfin Ahi Poke “Nachos” and Jidori Chicken Wings. Plus a large selection of street tacos such as the Ensenada FIsh Taco, Yucatan Pork Taco, the Carne Asada Taco and the Taco De Calabacitas.

As Jamie observed, “From the moment you open the heavy wood doors to Stone Brewery, to when you are seated on their gorgeous patio surrounded by luscious mature plants, you feel like you are transported to a secret hideaway that is sure to be a delight. I have been to Stone on numerous occasions for things such as the now famous fundraiser Stachetoberfest and also just for a quick adult beverage on a warm summer night. This lunch was by far the best food that I have had there since its opening.”

Stone does have an amazing vibe. For one thing, it is expansive. Almost like a retreat. For another, no TV’s to distract from the enjoyment of good food and conversation. It takes a certain confidence in the quality of your food to focus so much attention on it. And Stone doesn’t disappoint.

The new menu provides Bistro type cuisines with culinary flavors from all over the world. Starting with the “Beyond Beef” version of “The Burger,” which—like the all-beef version— is made with two 4 oz. patties, house spread, crisp butter lettuce, tomato, pickle, grilled onions on a white American, seeded brioche-potato bun, and cheese melting down the sides, there was no doubt we were dealing with burger royalty.

As Jamie put it, “There would be few to ever question whether or not this was a vegetarian burger or a fresh flame grilled burger by the taste of it. The texture and consistency was that of a real meat burger and the taste, along with the condiments on the burger bun were an absolutely pleasant surprise for this meat eater. My favorite part of this dish was the boiled, smashed and fried small white potatoes that are a fantastic substitute for regular, boring bar type fries.”

But while there are plenty of wonderful vegetarian options, such as Taco De  Calabacitas (with fried zucchini, ratatouille, cotija cheese, chipotle crema, pickled red onion and cilantro) the meat lovers are not left hanging.

Jamie tried the Black & Bleu steak tips, which was one of her favorites. “These tasty morsels are sprinkled with a gravy type sauce, crumbled bleu cheese and tobacco onions that end up melting in your mouth during each bite,” she said.

We both really liked the Charred Brussel Sprouts. We are both fans of Brussel Sprouts in all their forms. These are really crispy, and are almost like snacking on chips. They have a sweet tang brought about by the Pedro Ximinez sherry glaze.

We met the head executive chef at the Escondido Stone, Tausha Lopez, whose philosophy is sourcing local produce and clean organic meats. “We are a world bistro,” she said. They aim to pluck flavors from all over the globe and create a fusion. “We love bringing together different fresh flavors and playing with them. Sometimes Latin, sometimes Asian.”

Playful, yes, but it has to look great, too. And it does. That’s why Lopez emphasized that they use dry-aged Belcampo organic grass fed beef ground daily and hand formed in-house.

“We will change up the menu about four times a year to keep us inventive,” said Lopez, and so that regular customers won’t get bored. “We want to leave them wanting more.”

For every menu item you will see a suggested pairing of one of Stone’s brews. So, for instance, with the Yellowfin Ahi Poke “Nachos,” which are made with wonton crisps instead of corn chips—another example of the playfulness of the menu—the suggested pairing is Stone’s Tropic of Thunder Lager or Fear.Movie.Lions Double IPA.

Jamie and I both enjoyed the “Nachos,” and thought it was one of the more innovative items on the menu.

A lot of thought goes into the pairings. Which includes working with the brew master to find out what he suggests in the way of what goes well with what. “We taste them and we know what goes well together,” said Lopez.

We asked the chef what her own favorite dish is and she said, without hesitation, “The Dry Pot Cauliflower,” which is a traditional Chinese dish with wok-seared cauliflower, Szechuan peppercorn, red chili, pancetta and scallions. It is hot, but not too hot. Just enough to hold your interest.

Lopez has been with the company for a dozen years. From the San Gabriel Valley originally, she initially wanted to be in the medical profession, but found herself drawn to cooking. She attended the Culinary School of Pasadena and found that it was her passion. She started as a line cook with a great mentor and eventually opened the Stone Liberty Station location. She came back to Escondido five years ago. There she has a team of about 40-50, including five executive chefs.

She also helped to open the Napa Stone. Which has to be an amazing bit of chutzpah, or even “arrogance” to drop a brewery into the heart of California’s wine country! Yet by all accounts it works.

When a restaurant is based in a brewery, there is going to be a certain amount of crossover between food and beer. And yes, Stone does use its famous brews in some of its dishes. It is used in the Stone Mac N Cheese. Also in the Chinese Sticky Ribs where the ribs are brined in beer.

To keep things interesting Stone does have the occasional food pairing evenings for which customers can make reservations.

If you can’t make it to Stone, but you want to experience the new menu, they recently teamed up with DoorDash. You can even have fresh bottles, cans and growlers of Stone beer, and selected menu items delivered to your home or office. 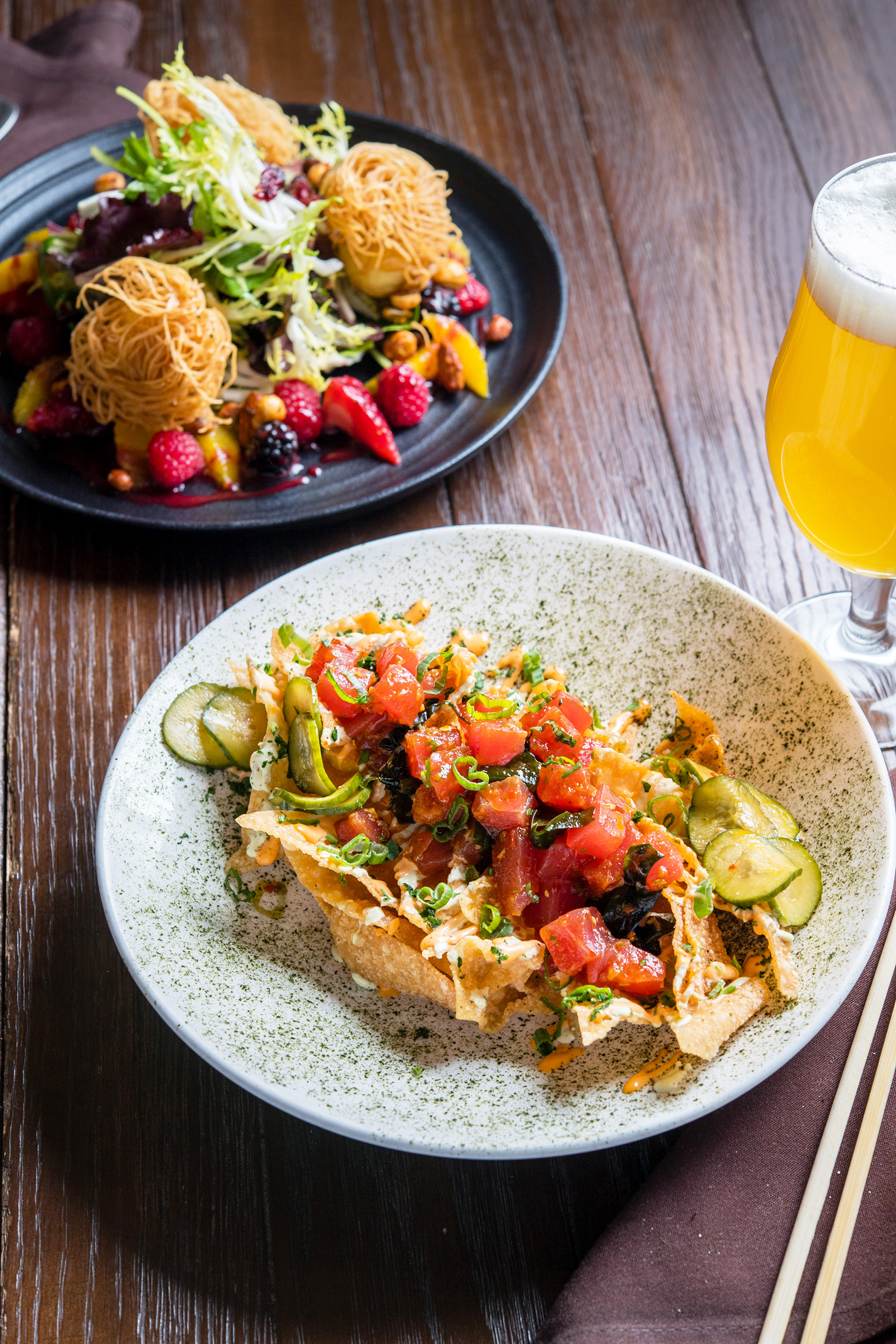 Items in the new menu are ideal for sharing and snacking. 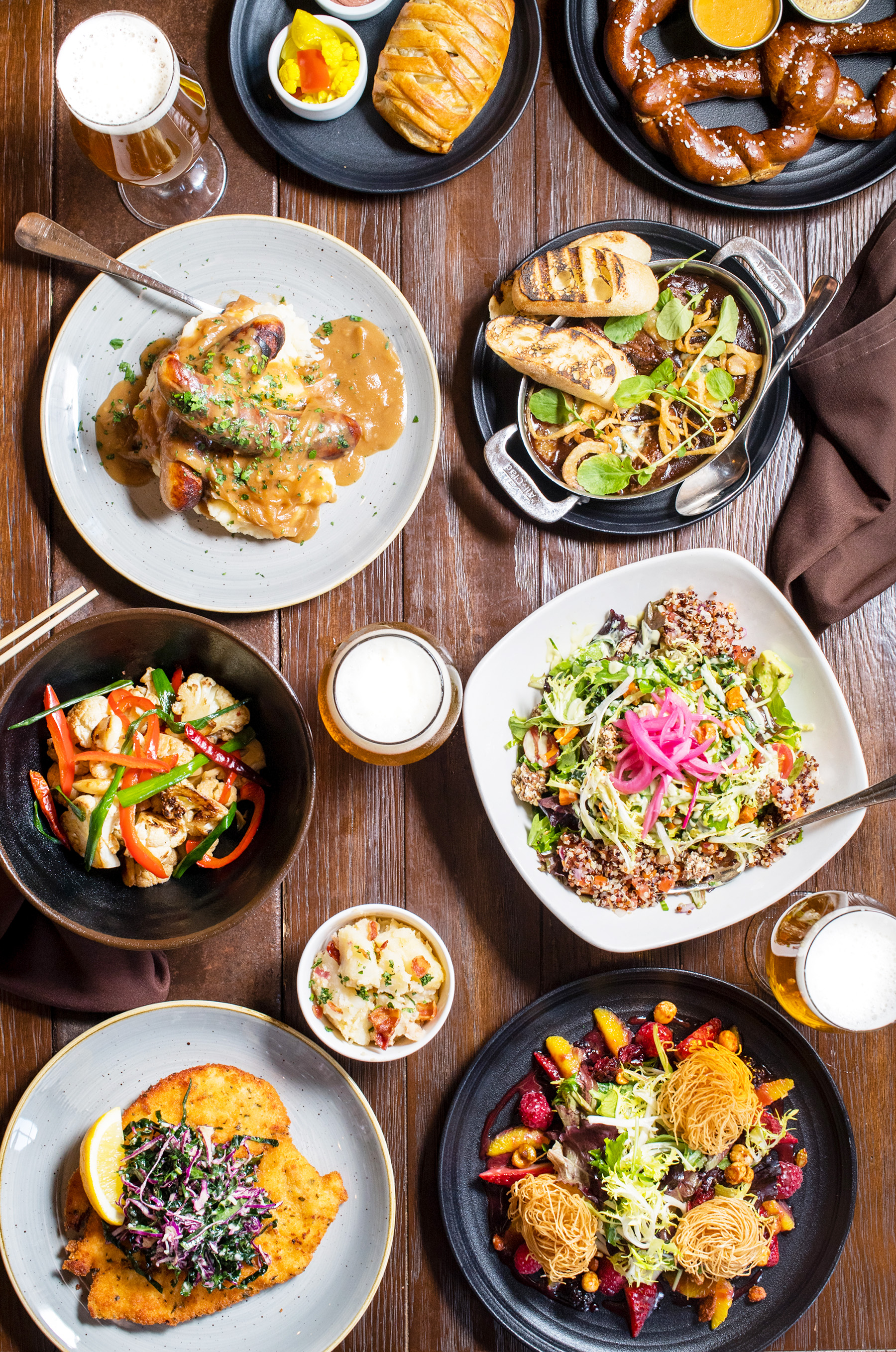 A collage showing of some of the new menu items at Stone Brewing in Escondido. 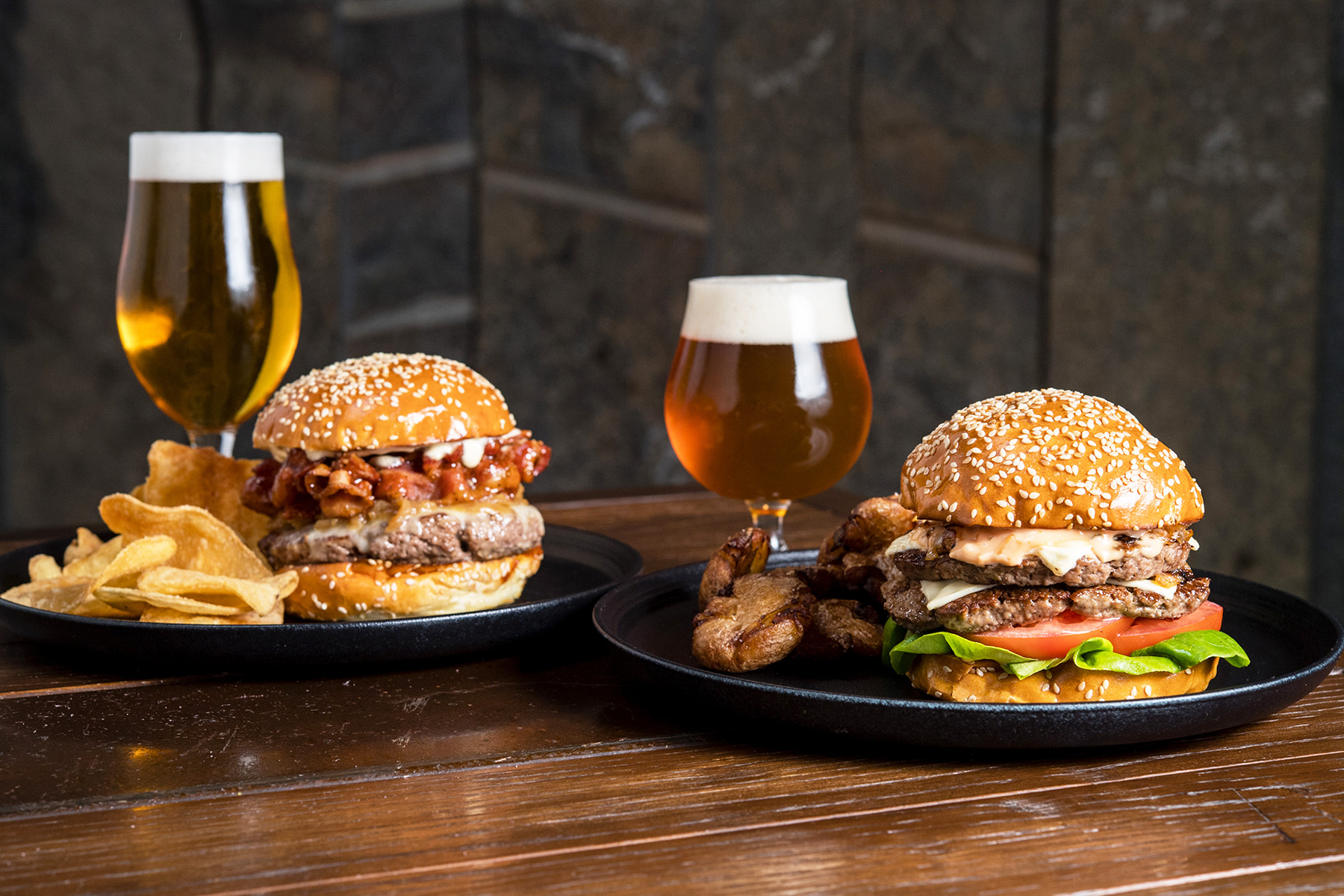 After years of resisting having burgers on the menu because that was too conventional, Stone relented and did a burger “their way.” They brought out two burgers that are worth the wait, featuring dry-aged Belcampo organic grass-fed beef ground fresh daily. They are paired with Tropic of Thunder Lager and Enter Night Pilsner. 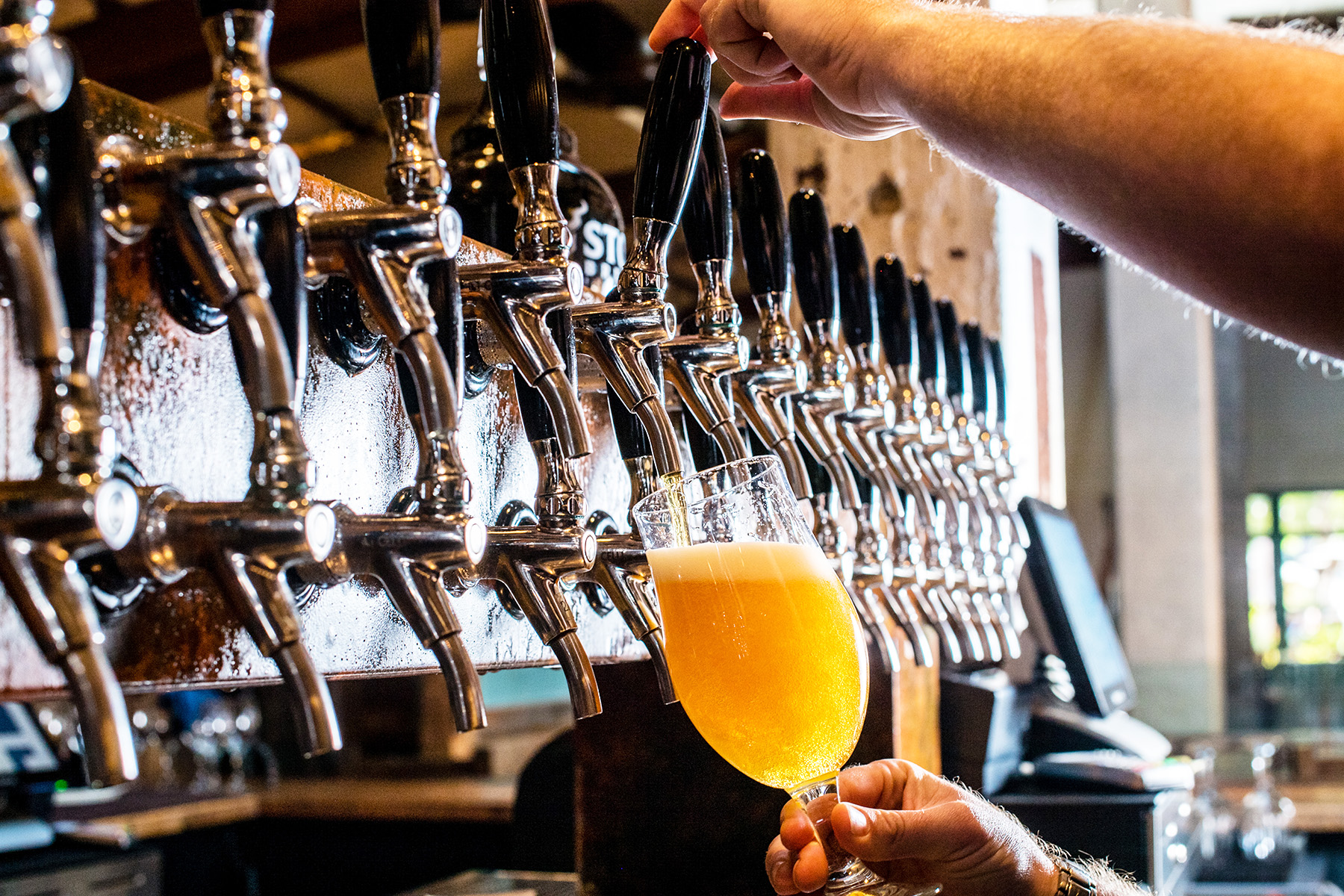 Of course, the brewery is at the center of everything that Stone Brewing does. 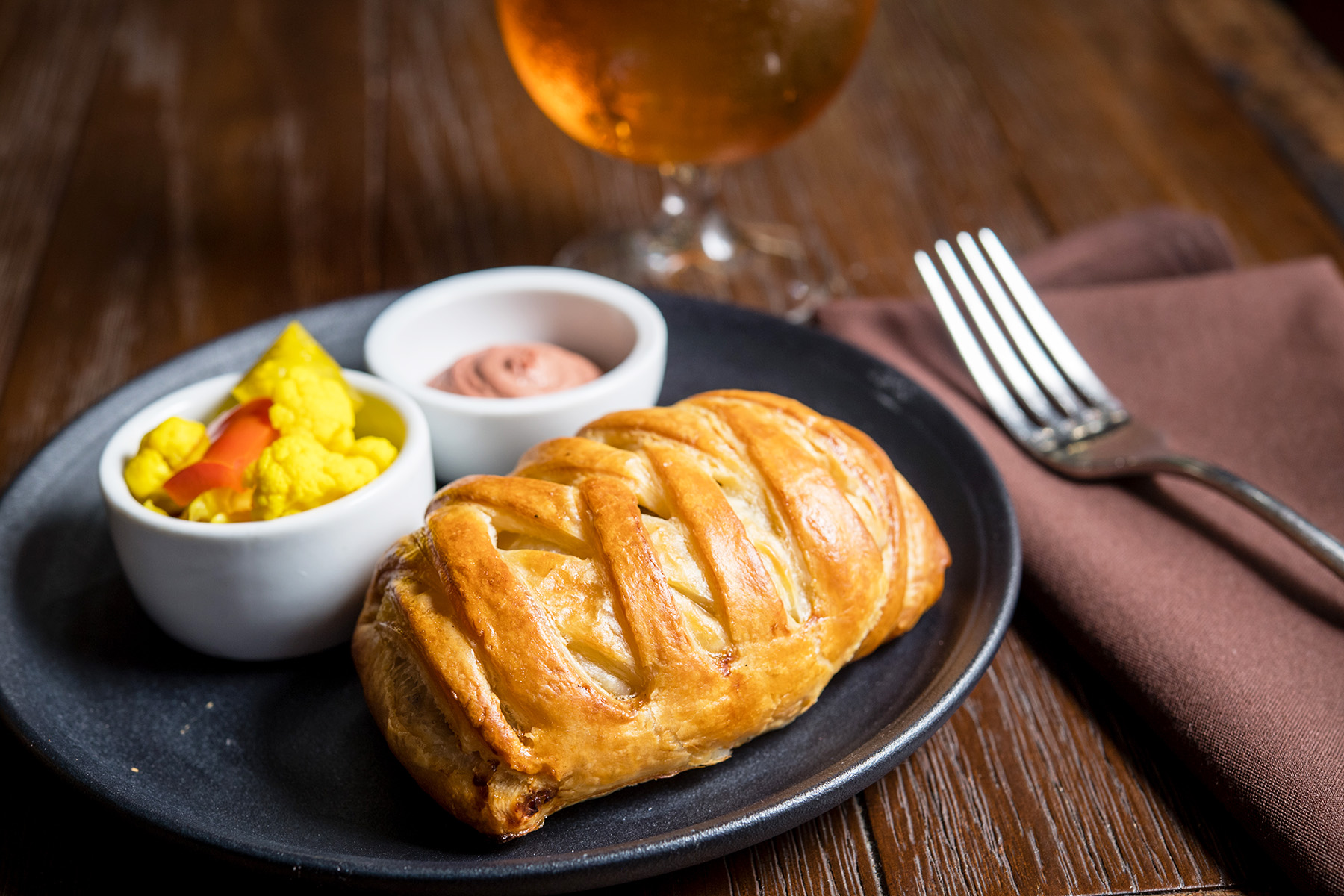 Sausage Wellington with a side of Dry Pot Cauliflower. 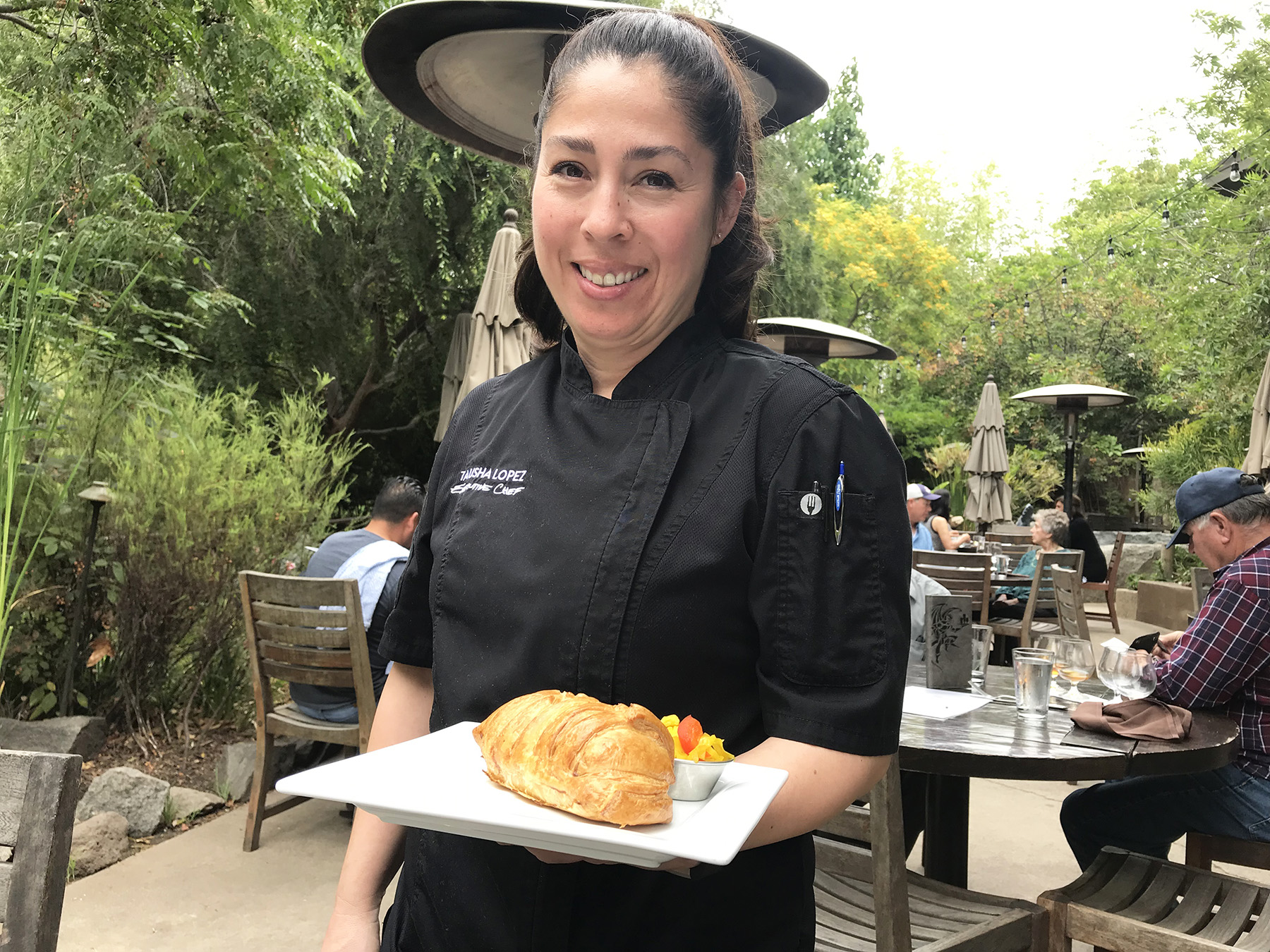