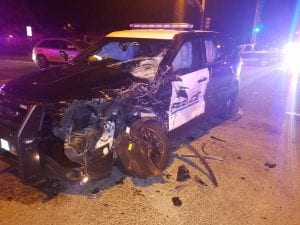 Both James and Officer Putulowski were transported by Escondido Fire to Palomar Medical Center for treatment. They were both later released with only minor injuries.

James was later booked for a violation of auto theft and hit and run with injury. Alcohol or Drugs is not considered to be a contributing factor in this collision. However, during the course of the investigation two separate DUI drivers were arrested as they encountered the collision scene. Both drivers were arrested and booked into the Vista Detention Facility.

The cause of the collision involving Officer Putulowski is ongoing and is being conducted by Officer Tom Venable of the Traffic Division. Witnesses are encouraged to call Officer Venable at the above phone number.