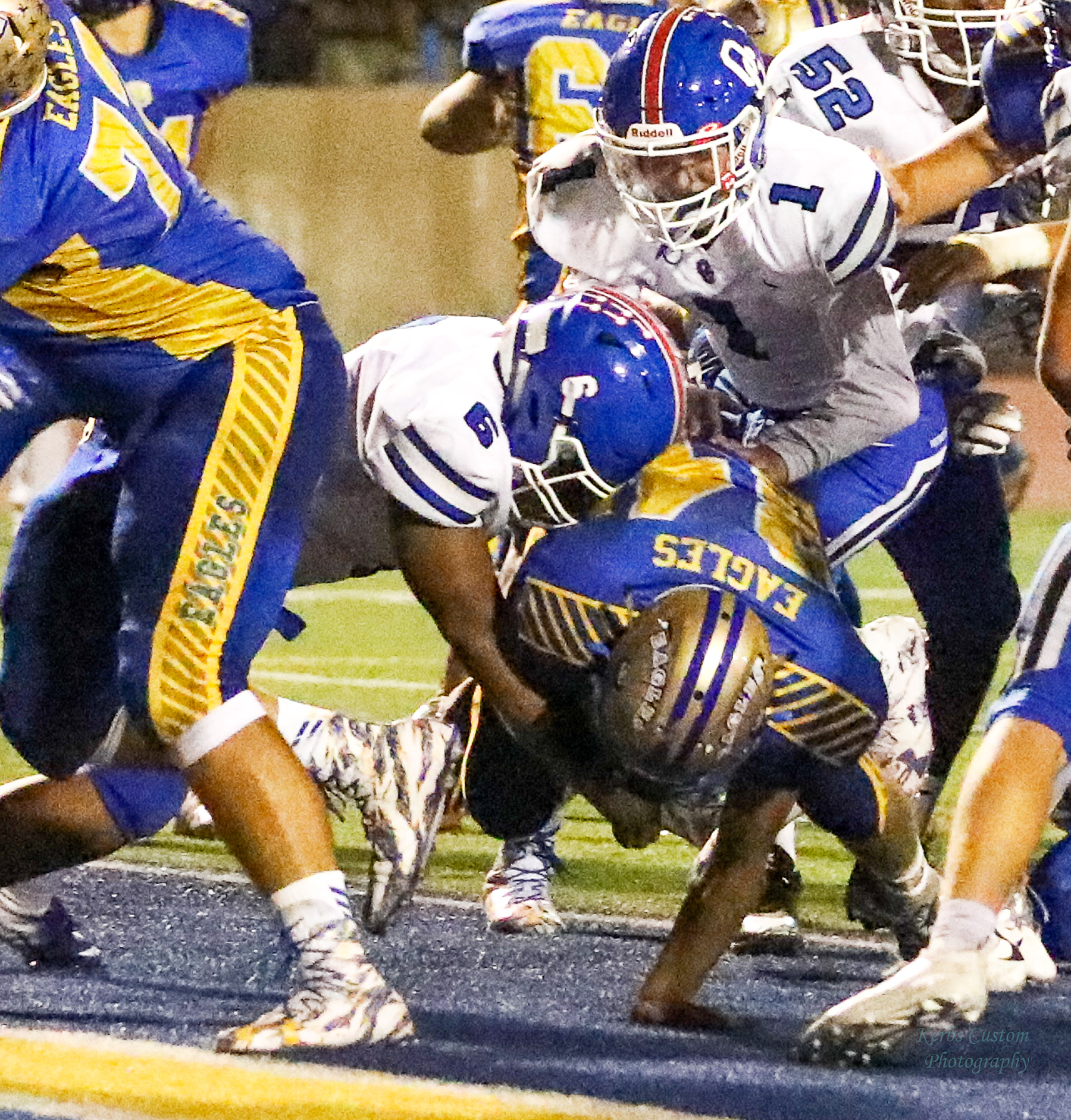 Linebacker deluxe and captain Julien Lesa (# 6), shown here wrapping up a San Pasqual ballcarrier earlier in the season, racked up 13 tackles in the Pats’ 22-7 win over Holtville. Photo by Lenny Kerbs

Leading up the San Diego Section Division V semifinal confrontation between the Orange Glen Patriots and the Holtville Vikings, tensions were running high. OG was anticipating a tough match and that’s exactly what they got from the visitors to the east.

As opposed to the fast-paced, high-scoring style of play exhibited the previous week by the Patriots in their win over Maranatha Christian, this contest was one of patience and excruciatingly slow progress. This proved to be the theme of the game as a whole. But the host Patriots managed to score just enough while leaving the rest to their suffocating defense en route to a 22-7 win.

By virtue of the victory, the No. 1 Pats (8-3) earned a spot in this Friday’s championship tilt where they will face third-seeded Francis Parker at Otay Ranch High. This marks the first time since 1990 that OG has advanced to a section final.

A scoreless first quarter was dominated by the defenses. While the Patriots were victimized by a sack and a couple of tackles for loss, the Vikings coughed up two fumbles, both of which were swiftly recovered by the Patriots defense.

The second quarter saw more dominance from the OG defenders when lineman Carlos Galan (7 tackles) delivered a terrific sack of Viking quarterback Noah Jongeward with a 7-yard deficit resulting from the play. The fruits of such efforts were soon realized in the form of the elusive Cael Patterson authoring a breakthrough 12-yard scamper for the game’s first touchdown. Energized by the play and now up 7-0, OG went into the third quarter with renewed vigor.

And that’s when the action began snowballing against the Vikings. Perhaps feeling the pressure, the Vikings got loose with the ball with the Pats snapping up fumbles like real-life Hungry Hippos. Ever the opportunists, OG soon after made the most of the ensuing chaos when stud linebacker Julien Lesa (13 tackles) intercepted a desperate throw from Jongeward and returned it a short distance for a pivotal pick-6. Subsequently, a successful two-point conversion extended the Pats margin to a 15-0 count.

But just when it seemed as if Vikings were all but done, they fired back with 9:45 remaining with a jaw-dropping 60-yard aerial connection between Jongeman and Marvin Tamayo that drew Holtville to within eight points.

However, the guests weren’t destined to get any closer as Patterson (138 yards) found his mojo when it mattered most. Proving to be harder to pin down than smoke, the talented senior put the game away  when he hustled his way to paydirt with a 9-yard tote with just 1:14 left that sealed the deal.

In contrast to last season when OG registered just one solitary win, this current run to a title game almost seems like a dream come true. But by completely buying into the culture that head coach Jason Patterson has established and playing with a commitment and resolve that is palpable, the Pats are on the verge of what would be the greatest turnaround in school history. Just one more step and that amazing accomplishment can become a reality.