Stewart happy to take on all comers 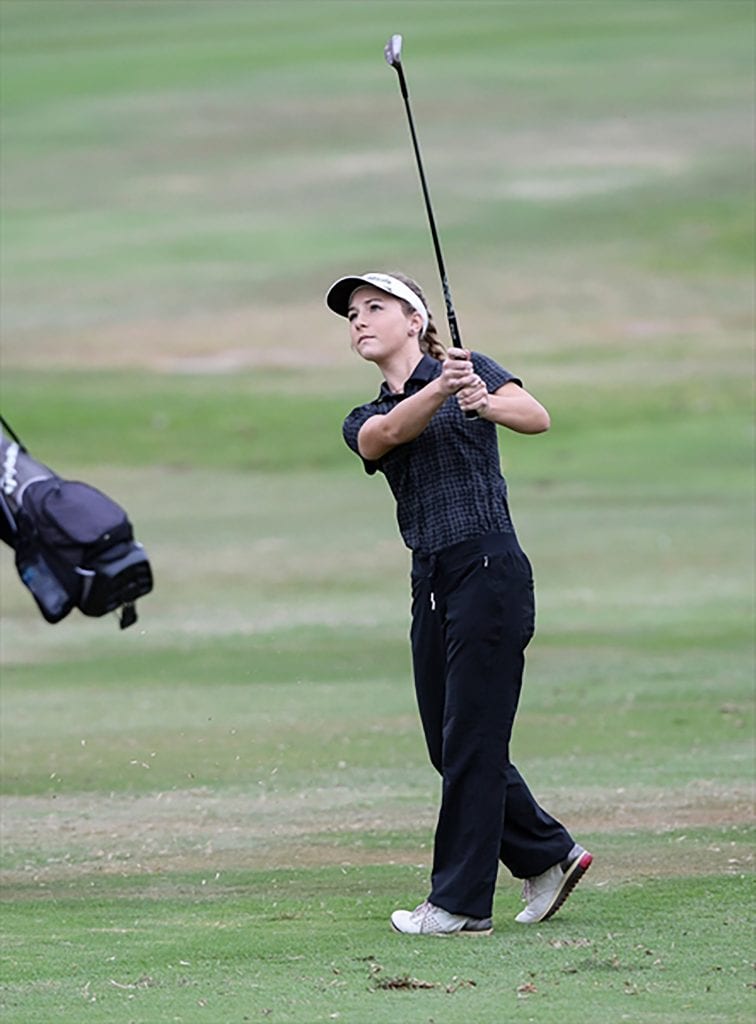 Classical’s Stewart is a consistent shotmaker who thrives against all sorts of competition.

Know this about Classical Academy’s gifted golfer Jaycie Stewart. She’s an equal opportunity competitor who has proven she can produce impressive results against either male or female opponents.

You see, the gender of her foes is immaterial to the 5-foot-4, 16-year-old Caiman standout. All that matters to the likable Jaycie is having the chance to put her admirable shotmaking on display. On the course, she shies away from nary a soul and relishes the chance to prove her mettle against anyone who may happen to stand in her way.

Jaycie’s affinity for the game of golf began at the age of 10 when her dad first took her to a driving range. Almost from the moment she picked up a club, an undeniable bond was formed between the intrigued young girl and this new sport to which she was being exposed. “I just loved it right way,” says Jaycie with a lilt in her voice, “and I couldn’t imagine doing anything else.”

Just three short years later, she secured her first big win in the PGA Jr. League as the only girl on a team that not only represented Southern California but traveled to Florida and once there, captured the national championship.

Then at age 14, Jaycie won a tournament that qualified her to participate in the IMG Junior World Championships. And earlier this year, she earned the right to play in that very same event which was held at the venerated Torrey Pines Golf Course.

Because Classical Academy does not field a girls’ golf squad, Jaycie was able to join the boys during her freshman year and did she ever produce! Quickly adjusting to having to play from the back tees to which she wasn’t accustomed, Jaycie emerged as the Caimans’ top performer and to the best of her recollection, won medalist honors in six matches.

Moreover, she discovered that being a teammate with the boys was a most rewarding experience. “The guys were really nice and really supported me,” she explains. “And it was so cool being a part of something that represented my school.”

Because Jaycie resides in Scripps Ranch, getting to the Caimans’ home course of Woods Valley (located in Valley Center) where the team practiced and played some of their matches was proving to be a bit of an ordeal due to the lengthy travel involved. As a result, she elected to skip her sophomore year of eligibility.

But that hardly meant that Jaycie wasn’t putting her clubs to maximum use. Quite the contrary! Following a regimen that she maintains to the present, Jaycie could be found literally every day for two to four hours at her home course in Rancho Bernardo either pounding balls on the range, getting in 9 or 18 holes or maybe a combination of both. Due to her diligence and dedication, her game was becoming even more burnished and honed.

Jaycie possesses an interesting amalgam of skills that, when mixed together, create a pretty special player. Off the tee, she employs a slight fade that enables her to be reliably accurate while drilling the ball some 220 yards. Quite adept at using the 4 and 5-hybrid clubs from middle distances, Jaycie also is a whiz with her 8-iron which she often uses to knock the ball stiff to the pin. Plus, her gap and sand wedges are real assets as is her short game around the greens. “I’ve practiced real hard on my putting and chipping,” she emphasizes. “And in particular, I work a lot on my short putts because that’s where a lot of important strokes can be saved.” 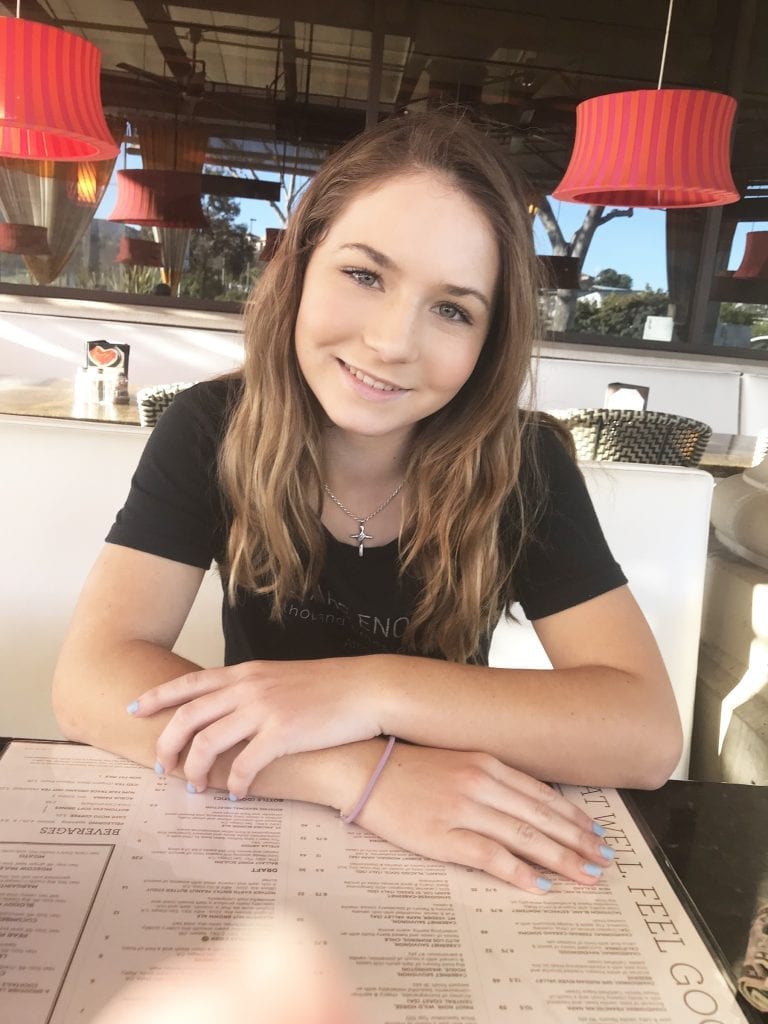 The gifted and likeable Jaycie Stewart is pointing towards continuing her golfing career at the collegiate level.

But when asked specifically about what makes her such a dynamite player, Jaycie points to something other than what has been mentioned thus far. “Oh, I believe it’s my consistency,” she says readily. “My scores don’t change all that much. Generally, I’m in that 34-to-37 stroke range for 9 holes. I’m pretty confident I can shoot those kinds of numbers.”

And as long as Jaycie maintains her conspicuous hunger to keep striving to be the best she can be, who knows where it all may ultimately lead. “I really love golf because there are so many ways in which you can work to improve,” Jaycie says. “And because it’s a goal-oriented sport that helps me keep pushing myself because I know how I do is totally on me.”

One other factor that has contributed to Jaycie’s success is her engaged mind. “I’m definitely a thinker on the course,” she reveals. “I like to analyze situations that come up and then decide whether to go for a certain shot or just play it safe.”

Another example of Jaycie’s knack for rising to the occasion came last October when after qualifying for the girls’ CIF championship, she finished a noteworthy 8th out of a sizeable field of 108 players. That solid result enabled her to advance to the regionals, a much sought-after destination.

As for the future, Jaycie’s burning desire is to test herself at the collegiate level. Right now, the immediate aim is to find a school that not only fits her golfing needs but will also allow her to pursue an interest in psychology. Among the schools she’s considering are Dallas Baptist, Cal Baptist as well as nearby San Diego State.

Having had the opportunity to further her education at Classical has been something that Jaycie has totally relished and embraced. Her comfort level at the Escondido-based school is readily apparent. “I’ve made such great friends there,” she begins, “and all the people at the school are really great including the teachers. I just can’t imagine being at a better place.”

What’s more, much to the Caimans delight, Jaycie plans on rejoining the boys’ squad this coming spring for her junior season. Needless to say, with her back in the fold, Classical will get an enormous boost.

For at least the next couple of years, Jaycie Stewart figures to have plenty more chances to show what she can do against a variety of opponents, be they male or female. So players of both genders had better beware whenever they spot the accomplished Jaycie heading towards the first tee in an attempt to add to her ever-growing resume.