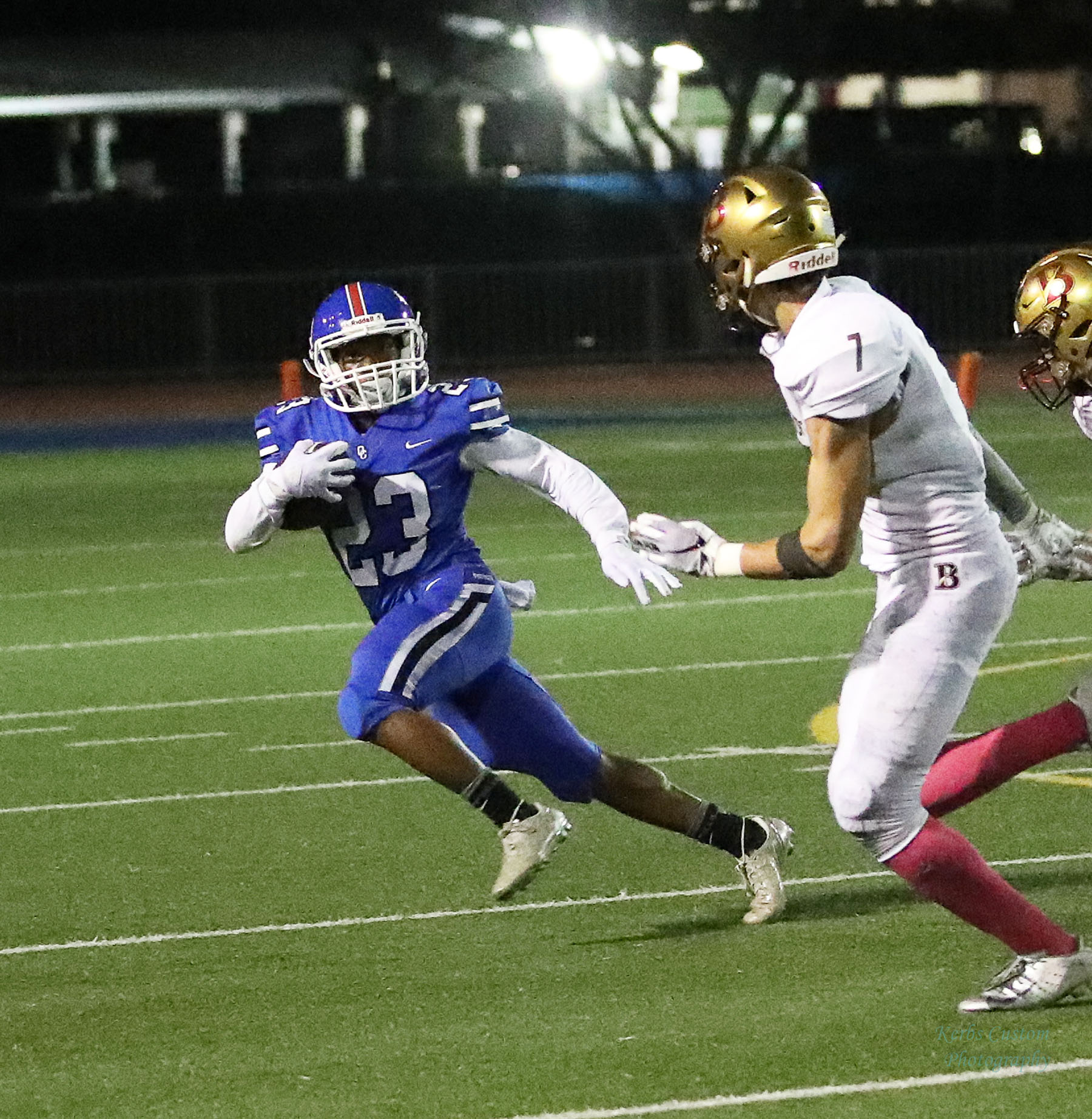 Though Moray Steward is quick on the football field, he puts his tremendous speed to best use on the track. Photo by Lennie Kerbs

Though he has proven himself to be an explosive football player, Orange Glen’s Moray Steward has made even more of a name for himself when it comes to his exploits on the track.

Simply stated, there are very few prep dash men who can book like Steward. Not only can he run like the wind but you can almost hear the whoosh whenever he goes by. Dynamic speed and Steward go together like hand and glove.

Recently, the senior Steward wrapped up a magnificent track season that not only showcased his remarkable quicks but also gave testament to his knack for delivering in the clutch. When tested against the highest caliber of competition, Moray more than measured up. No moment ever seemed to be too big for him.

Whether it was darting down the track in either the 100 or 200 meters or anchoring OG’s 4×100 relay team, Steward produced consistently superb results that earned him a reputation as one fleet-footed mover.

The numbers tell the story of a Patriot who could have easily gotten the word out to the colonists just rapidly as did Paul Revere and his trusty steed.  Twelve times Steward got into the blocks at the 100 and on seven of those occasions, he came home a winner. Moreover, second and fourth-place finishes in this event might have been even more significant because of where they occurred. More about that a bit later.

And when he was asked to stretch things out, Steward was also a dominant performer in the 200 where he captured seven of nine races. Steward’s motoring skills were also put to mighty good use within a team concept as he impressively anchored an OG 4×100 quartet that won six of the 10 times that it competed.

By virtue of notable second-place finishes in the San Diego Section Finals in both the 100 and 200, Steward earned the right to compete at this year’s CIF State Championships held in Clovis and did he ever make the most of the opportunity.

After advancing through the prelims, Steward then really showed his chops by rocketing his way to a personal best time of 10.54 in the 100 finals that resulted in a splendid fourth-place finish. Revealingly, his effort in the 200 was nearly as consequential. Authoring a season record of 21.49, Moray’s run was bettered by only five other competitors.

Just for a moment, allow those extraordinary accomplishments to sink in. Of all the sprinters in this lengthy and massive state, Steward ranked in the top six in two very prominent disciplines. Now that constitutes some very heady stuff.

Based on his recently completely prep career, it’ll be most interesting to see where Steward’s speed leads him in the upcoming years. But one thing’s for sure. Hardly anybody figures to be able to keep up with him!