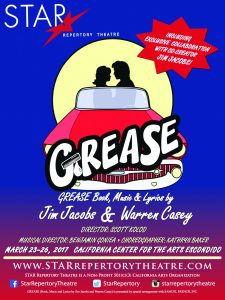 Escondido’s STAR Repertory Theatre, in collaboration with Jim Jacobs, will  present their production of “Grease The Musical,” at the California Center for the Arts, Escondido, March 23-26. The show brings the T-Birds, the Pink Ladies and all the characters from the memorable musical to the Center.

Besides obtaining the rights to “Grease,” the STAR Rep was able to work with the co-writer and creator Jim Jacobs on this production. STAR Rep also purchased the rights to use the additional movie songs from the John Travolta/Olivia Newton-John version.

With a cast of over 53 actors and a live orchestra, this may be STAR’s biggest production so far.

STAR Rep teamed up with “Grease” co-writer and creator Jim Jacobs for the latest production of this all-American favorite. “Grease”  follows the ‘50s romance of innocent ingénue Sandy, and bad-boy greaser Danny as they enter their senior year at Rydell High. Danny believes their hot summer fling is over … until Sandy unexpectedly enrolls at his school.

The hit 1978 movie starring John Travolta and Olivia Newton-John quickly became a musical phenomenon with catchy sing-along tunes like “Summer Nights,” “You’re the One That I Want,” “We Go Together,” “Hopelessly Devoted to You” and “Greased Lightning.” This stage version, packed with high-energy choreography, remains a perennial favorite.

STAR Rep COO/Founder and Director Scott Kolod said he is extremely happy to be able to bring “Grease The Musical” to the stage in San Diego. “Working on this production has been the time of my life! I have loved this show since it opened in the early 70’s. Everyone loves the iconic 50’s romp with Danny, Sandy and the gang. Then, when the movie came out I loved it as much or more. It is difficult for a Community Theatre to obtain the rights to perform the show. So, after two previous denials, I was elated, when they finally said yes!! Then, we were lucky enough to reach a deal to add some of the movie songs to these performances. It was so cool that the stars aligned to allow Ben Goniea, Kevin Burroughs, and Kat Baker to work together with me on this. Then, the fates looked down, and bestowed the inimitable Jim Jacobs upon me. As if that were not enough, I was very fortunate to have an incredibly talented and hard working cast come out for the show. Then, I was happy I worked out a deal with a new company to secure the technology and equipment to use ‘Grease’ projection backdrops, and that I have Justin Fry. to make it a reality! But, maybe best of all, I get to play electric guitar again. It has been a long time.”

STAR Repertory Theatre is one of the few community theatre organizations that is comprised of professional working performers, who have grown up through The Youth Theatre system, and are anxious to share their knowledge and experiences with today’s youth. STAR Rep’s youth theatre division is dedicated to ensuring that its rehearsals and performances are FUN, educational, and rewarding. STAR Rep’s adult theatre division is dedicated to providing top quality professional performances.

STAR Rep’s mission is to teach, develop, create, promote, and present compelling and impassioned works that bridge communities through entertaining artistry. STAR Rep’s specific goal is to ensure that the child actors have fun while learning and performing, while the adult actors achieve the height of excellence. In the last few years, several members of the STAR Rep Family have appeared on and off Broadway productions, and in such TV shows as “American Idol,” and “Nickelodeon.”

See dates and times below:

Tickets prices range from $14.50 and are on sale at www.STARrepertorytheatre.com/ Discounts are available for seniors/students/military.

To view the Full Cast List: www.starrepertorytheatre.com/cast-list-grease-2016.php. For Tickets through the STAR Rep website: www.starrepertorytheatre.com/tickets-adults.php; through the CCAE Box Office website www.artcenter.org : or by calling CCAE Box Office at 800-988-4253; and Goldstar. Group ticket rates are available through STAR Rep and CCAE.