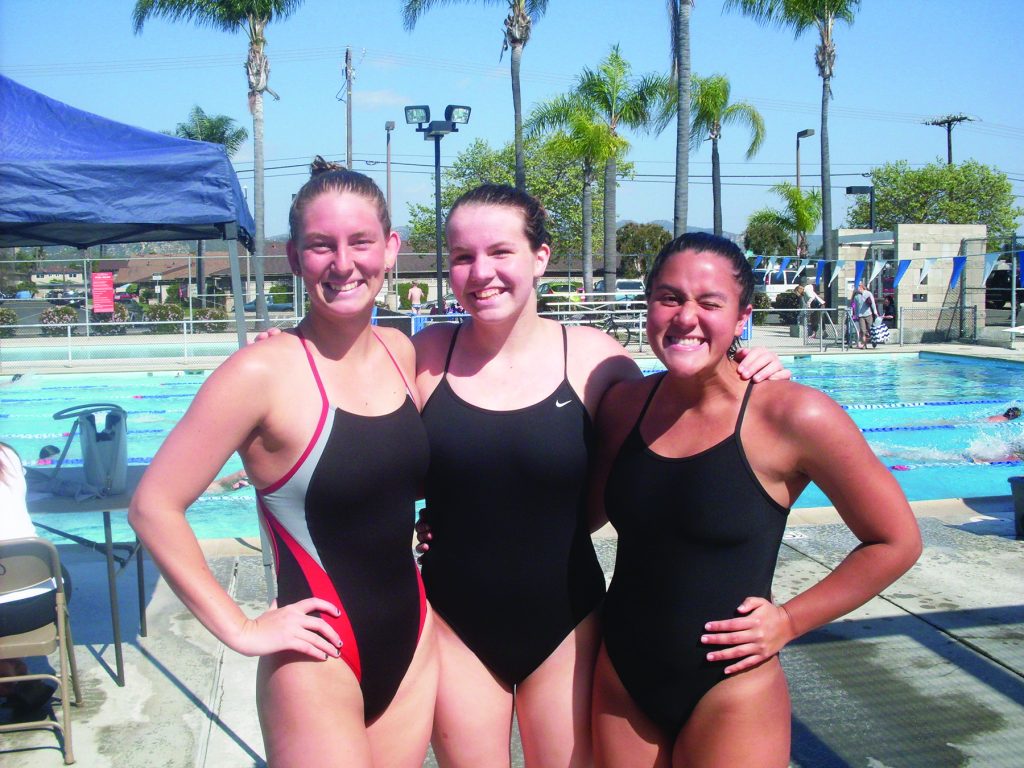 Classical’s swimming mainstays have been (from the left) Carly Hoff, Mikaila Barker and Karina Thomson. Photo by Brittany Aellig

Classical Academy high school has begun to make a name for itself in the aquatics department.  Hoping to solidify their success this year, three swimmers have dominated the girls’ varsity swim season with multiple school records and plan to set even more during CIF.

Coach Scott Smithers says confidently that “no one outworks them” in practice or during meets.  Completely sure of the three girls’ work ethics as well as their skillsets, he hopes to see them lead the team through an undefeated season.  At 6-0 so far, they are well on their way to achieving this goal.

Karina Thomson, a senior, has been swimming for 12 years and has been on the swim team at CAHS since she was a freshman.  Although she currently doesn’t plan to continue swimming in college, she has made a definite mark in the Caiman Hall of Fame.

Curiously, this young athlete does not relate to rivalries or overly aggressive objectives during meets.  “I love swimming but I’m not very competitive.”  She acknowledges this as the reason she does not have a strong desire to swim in college.  For Thomson, the talent is already there; making swim meets pure fun rather than stressful competitions.

“It’s my senior year so I mostly just want to have a good time and really enjoy it,” she explains when discussing her goals for this season.

Her love of spending time underwater began when she was only a toddler.  At 3 years old she joined her family on a snorkeling adventure in Hawaii.  She says with a laugh that she would “jump in the water all the time without her parents,” explaining that she just “really wanted to be a dolphin.”

This obsession spurred her family to sign her up for lessons, eventually leading to her joining a team.  While she has always enjoyed the sport, she strongly asserts that this has been her favorite year.  “The team is super supportive and since I’m not competitive, it’s all fun,” she says.

While Thomson winds down the end of her swimming career for now, Carly Hoff is just beginning to find her name on school records.  Only a sophomore, she has already been swimming for eight years.  Like Thompson, she joined the team at CAHS her freshman year.  Hoff found her passion for swimming through a similar love of the water.  “I never wanted to get out of the pool so eventually I joined some teams after completing all of the swim class levels,” she says.

Hoff did try her athleticism in other sports, but didn’t find she enjoyed any of them as much as she enjoyed swimming.  In addition to sharing the 400 Free Relay and 200 Free Relay records with Thomson, she also has the score to beat in the 500 Free and the 200 Free.  Beaming, she explains the triumph of shaving time off to set the record for 200 Free:  “I dropped six seconds, which defeated my personal best time that I had held since I was 12 years old.”

While most confident in the100 Fly and 200 Free, she is acutely aware of where she wants to improve.  “I’m not great at breast and backstroke, or the 50 Sprint Free,” she explains.  Hoping to increase her skill level, she reveals her hope to break even more records this year at CIF.  Hoff is also determined to see her team “win league officially.”

Last season, although their scores qualified them for the win, there was a paperwork mishap and they “weren’t officially in the league” so the title was given to another school.  Hoff is confident in the team’s ability to achieve this goal, largely due to their sense of camaraderie.  “We’re all family; we all get along and cheer each other on,” she says.

Although they compete against each other for the best times, she describes the atmosphere as friendly and encouraging.  “We’re not trying to get a good time for just ourselves, but to get points for the team” she says.

While only a sophomore, Hoff hopes to get a scholarship to a small school in order to continue her swimming career.  Smithers agrees, revealing that Hoff also has a chance at a water polo scholarship.  Boasting easily of her skills, where Hoff is more modest, he details that she “brings it every set, everyday, and is wise beyond her years.”  Smithers looks to Hoff and Thomson, the latter serving as this year’s team captain, as “natural leaders.”

Another role model for her teammates, manifesting her influence as more of a “quiet leader,” according to Smithers, is sophomore Mikaila Barker.  Smithers relates a story of a meet Mikaila participated in as a freshman.  The relay required four girls, and five swimmers were available and qualified.  Although the faster swimmer, Barker voluntarily stepped down in order to allow a senior to compete in the relay, knowing she could always compete during next year’s season.

Barker now shares the 200 Free Relay record with Hoff and Thomson.  She is also the record holder in the 200 Yard IM, which she set as a freshman while dealing with a bad shoulder.

While her coach revealed the injury, Barker is proud of the record due to her inexperience.  “I hadn’t swum much before high school, just enough to be comfortable, and then at CIF I dropped 5 seconds.”  Similar to Hoff, Barker discovered her knack for swim through a process of elimination. “I was bad at other sports,” she says with a shrug.  “Plus my older brothers swim and I’ve been taking swim lessons since I was 2,” she adds nonchalantly.

Quick to turn the spotlight to another teammate, she brags about her favorite record set by Hoff.  “In the 200 Free Relay we were the fastest but from the smallest school so no one expected it.  At the last 50, Carly out touched the other swimmer by 13 or 14/100ths and got first place!”

Although humble, Barker does not deny her abilities or her passion for swimming.  “I definitely want to play in college at a D2 or D3.  I love swimming and want to do it as long as I can,” she says.

All three girls are clearly forging a path of success not only for themselves but also for their team as a whole.  “They all have a strong work ethic,” says Smithers.

He coaches with a focus on “teaching life skills,” hoping they become “accountable and responsible adults, with their wins and losses being a byproduct of that process.”  Although confident in their abilities, these girls clearly have learned from Smithers coaching techniques.  They are quick to boost each other’s confidence and all find their favorite part of competing in the friendships and support system found in their teammates.  The swimmers are also eager to express their gratitude towards their parents.  “I just want to say, ‘thanks mom and dad’,” Thomson begins.  Hoff quickly agrees, adding, “This is a lot of hours for them to put in.”

Already demonstrating responsibility, maturity, and an obviously high skillset, these three girls are sure to continue to set records and bring their team to the top.