Stan was “the Man,” but just barely 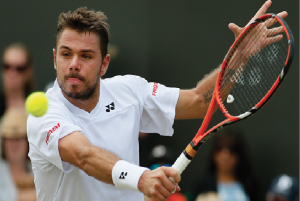 In another example of his ability to win the big points, Wawrinka was able to fend off the youngster Thiem.

On paper, last week’s quarterfinal match at the BNP Paribas Open at Indian Wells between the world’s No. 3 Stan Wawrinka and Austria’s 23-year-old standout Dominic Thiem (now ranked eighth) looked like it had the potential to be one whale of a confrontation.

It seemed to have all the elements required to make for some riveting and compelling theatre. At age 31, the Swiss Wawrinka has ascended into the tennis elite and equipped with arguably the best backhand in the game to go along with a forceful and often timely serve, when Stan is right he can take down anyone on the planet.

As for Thiem, he’s at the very forefront of a wave of promising young talent that soon could become household names even to the most casual of fans. Having cracked the Top 10 list less than a year ago and already with eight titles to his credit, including this year’s tournament at Rio de Janeiro, Dominic is undeniably a budding star.

Armed with a powerful forehand and a willingness to constantly go for his shot, the dark-haired, 6-foot-1 Thiem can be scary good. When opponents see that’s he’s on their side of the draw, they know full well that it will be no day at the beach. Thiem now represents a supreme challenge, no matter whom he may encounter.

So the expectation was that this nighttime duel could turn into something special. And to the delight of the thousands of fans that took in the proceedings at the iconic Stadium 1 court, it was that and then some. In just about every way imaginable, Wawrinka and Thiem delivered and didn’t disappoint.

And in the end, it was “Stan the Man” who emerged victorious but just by a whisker. Ramping up his serve when it mattered most, Wawrinka’s clutch gene kicked in at just the right moment as he went on to a thrilling 6-4, 4-6, 7-6 (2) tiebreak win. If ever a crowd got its money’s worth, this one did on a pleasant evening with temperatures that hovered in the mid-to-high 70s. 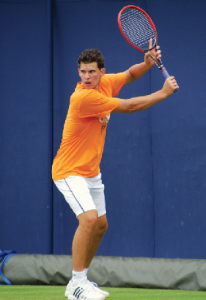 The gifted Thiem gave Warinka everything he could handle.

This was a match that had so much to offer. It dazzled the senses with the resounding thwack of balls being punished and the sight of shots painting the lines and generating tremendous depth. At times, it seemed as if the two combatants were so far back of the baseline that they were hitting out from the parking lot if not the neighboring Interstate 10.

Moreover, some of the rallies were just plain breathtaking. Lasting for what felt like forever, they featured a remarkable array of shots, from ripping backhands to defensive slices and blocks, from bludgeoned forehands to crosscourt chips. And just to change things up, there were some deft volleys thrown into the mix. Needless to say, much of what played out was high class stuff.

The first set began with service breaks by each player. What followed included stunning Wawrinka backhands, a dialed up139 mph serve by Thiem, a honey of a topspin forehand by Stan and an artful stab volley by the youngster.

Then Wawrinka rolled over a beautiful backhand winner to go up 4-3. But Dominic was undeterred and he leveled the count with his own backhand that was absolutely blitzed. But by now, Wawrinka’s serve was locked in and he rode it to once again forge in front. And when Thiem got loose with a forehand that went long, Wawrinka made him pay on the very next point with a terrific backhand winner down the line that wrapped things up at 6-4.

Despite the fact that he had dropped the first set, Thiem was fully aware that he was right there with Wawrinka and had little reason to get down on himself. And sure enough, here came the Austrian who has been playing tennis since age six and sometimes goes by the name of the “Dominator.”

Serving with both pace and kick, loading up on his howitzer of a forehand and effectively coming to net with precisely angled volleys, Thiem raced to 3-1, 4-2 and 5-3 leads. And when he pinpointed a backhand to a spot that Wawrinka had just vacated, the set was his and this dogfight of a match was fittingly all square.

Now it was Stan’s turn to assert himself and boy did he ever! Parlaying a forehand that scorched the line, an ace and another serve that pulled Thiem wide, a drilled passing shot and a smoked backhand, Wawrinka seized a 3-0 third-set margin that appeared to put him in a commanding position.

And yet, Thiem had invested so much in this fascinating mano a mano not to make another surge. Regardless of the deficit, you couldn’t help but feel that Thiem was far from out of it and would certainly continue to put up a spirited fight. He’d come way too far to simply pack it in.

Then, almost on cue, Thiem mounted his comeback. Two nifty volleys earned him a game. A backhand stab and crushed forehand got him another. And with one more forehand blast and a blown Wawrinka overhead, the count was suddenly 3-3 and brother, was it ever on!

Stan managed to stop the bleeding with a clear-cut winner and an ace. But then Thiem did him one better with two aces of his own. Wawrinka enjoyed a strong service game to nose in front at 5-4 but Thiem countered with a heavy topspin forehand and again it was tied. Wawrinka next held at love only to watch as his resilient foe clipped the net with a shot that just toppled over and forced the deciding tiebreaker.

Unlike his earlier days when he was inconsistent and sometimes erratic when the pressure was ratcheted up, the three-time Grand Slam winner Wawrinka is no longer awed by the big moments and points. Nowadays, he embraces if not owns them. And he proved as much when the match with Thiem reached critical mass.

In just a blink of an eye, the Swiss who is also known as “Stanimal” because he can be a beast on the court whenever his game is at its dominating best, jumped out to a 6-2 advantage. A power serve that Thiem couldn’t handle, a crisp volley, a lunging stab and a rifled ace helped put Wawrinka on the brink. And when Thiem dumped an unforced error into the net, this pitched battle was finally over.

As they met at the net in the match’s immediate aftermath, these two remarkable competitors embraced warmly and carried on a somewhat lengthy conversation. The mutual respect and admiration that they held for one another was apparent for everyone to see.

For Wawrinka, who has now gotten the better of Thiem in three of their four lifetime matches, it was a most satisfying win, as he displayed both poise and consummate skill while fending off a truly talented challenger.

And as far as Thiem was considered, even in defeat, he continued to show that his upside is enormous. Confident in his thunderous and loaded forehand, equipped with a superb one-handed backhand, able to pound serves at a high velocity and solid at the net with his well-struck volleys, this young man has star written all over him. It seems an almost foregone conclusion that in the relatively near future he’ll ascend into the Top 5 and very well might bring home a Slam title as well. Thiem is clearly the poster boy for the ATP’s new breed.

However, on this much splendored night, it was Stan who was “the Man,” but not by much. And based upon what took place, Thiem probably can’t wait until the next time he gets a chance to tame “Stanimal.” But whenever that may happen, tennis fans will eagerly anticipate the next time these two gifted players are destined to cross rackets.

Postscript – Wawrinka advanced to the finals where he was defeated by the suddenly resurgent and age-defying Roger Federer 6-4, 7-5.